Co-Marketing: How Flipboard and Fitbit Teamed up to Create a New Health and Fitness Community 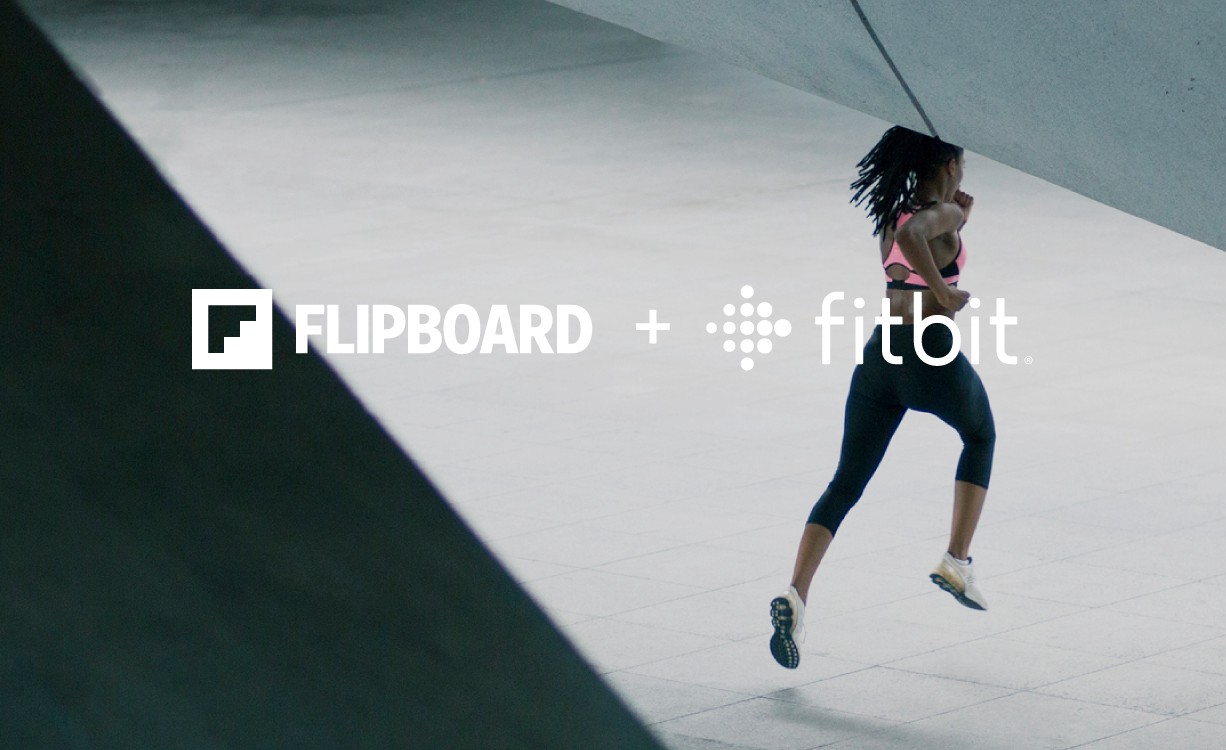 We recently finished a co-marketing campaign with Fitbit, in which Flipboard and Fitbit users were invited to join the Flip. Heart. Go. community, a place to get inspired and inspire others to move more, eat well, and even sleep better. For a little extra motivation, members were encouraged to share or like stories for a chance to win a Fitbit Versa watch and an all-expenses paid trip to San Francisco to train with a Fitbit Local Ambassador. In this post, we share the details of how this partnership came about, what drove success, and key takeaways for brands.

Fitbit was the right fit

From the starting line, we knew that both Flipboard and Fitbit were on a mission to help people invest in themselves and live their best lives.

With Fitbit’s blog, active community, and launch of their new Fitbit Versa watch, we knew we could cook up something special together. We came up with Flip. Heart. Go. — a place to find and share inspiring stories, read fitness tips and tricks, and connect with wellness enthusiasts. The destination was easily accessible both on the web and in-app. 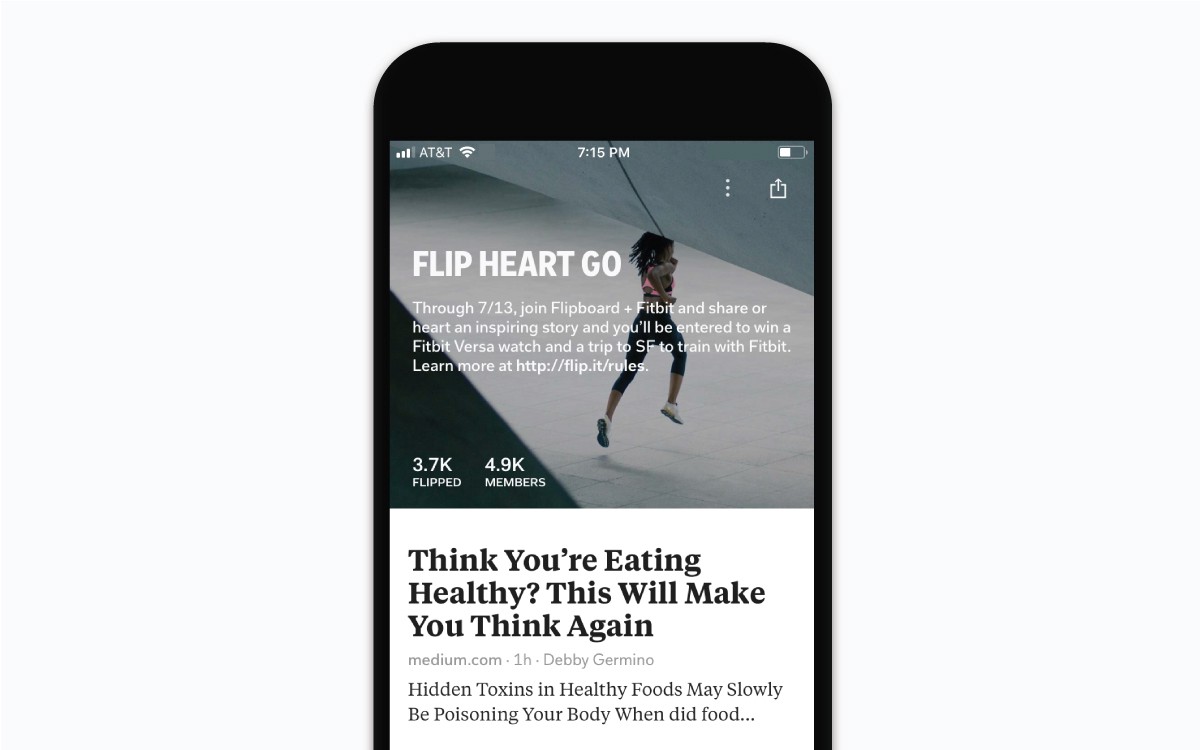 To make the campaign a success, we wanted to ensure both Fitbit’s and Flipboard’s goals were met. Fitbit was looking to raise awareness for their new Fitbit Versa watch amongst an engaged audience. Flipboard wanted to increase brand awareness and boost community engagement. 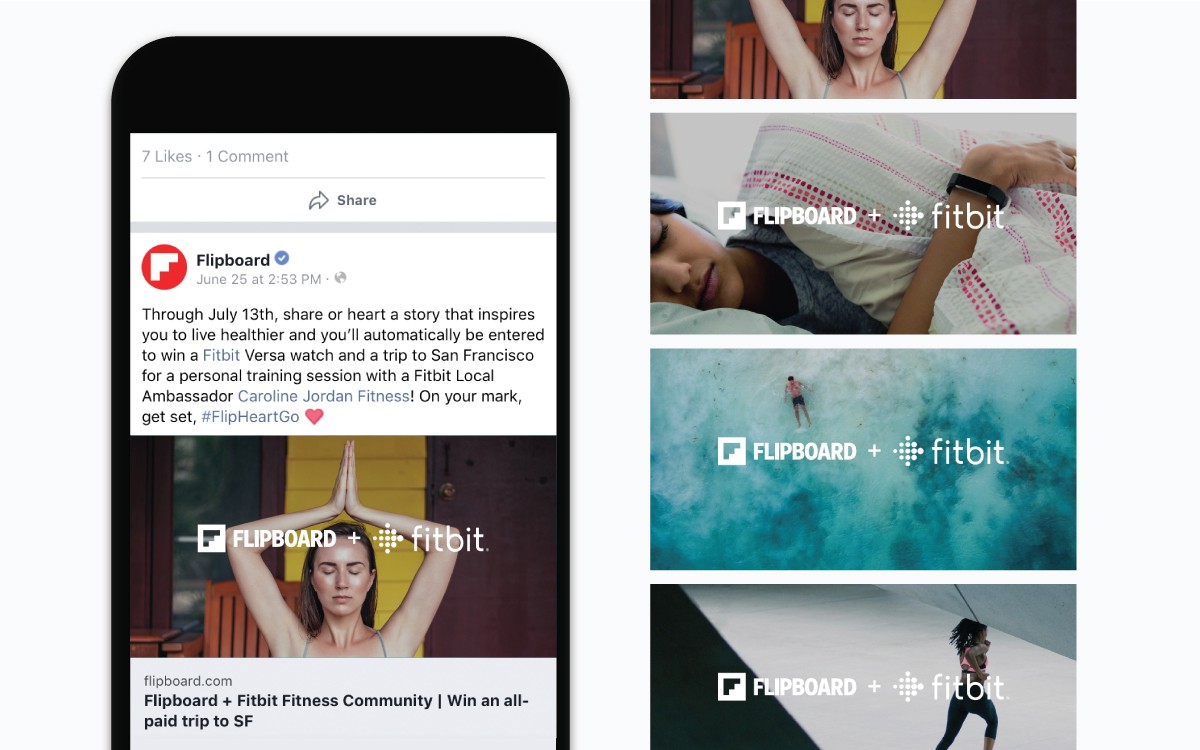 When users entered the destination, they were invited to join the group. Shortly thereafter, they received an educational email letting them know how to share stories, interact with the group, and automatically be entered to win in the sweepstakes. This email not only helped boost engagement in the group, but it also taught new Flipboard users how to curate in the app.

It was a win-win 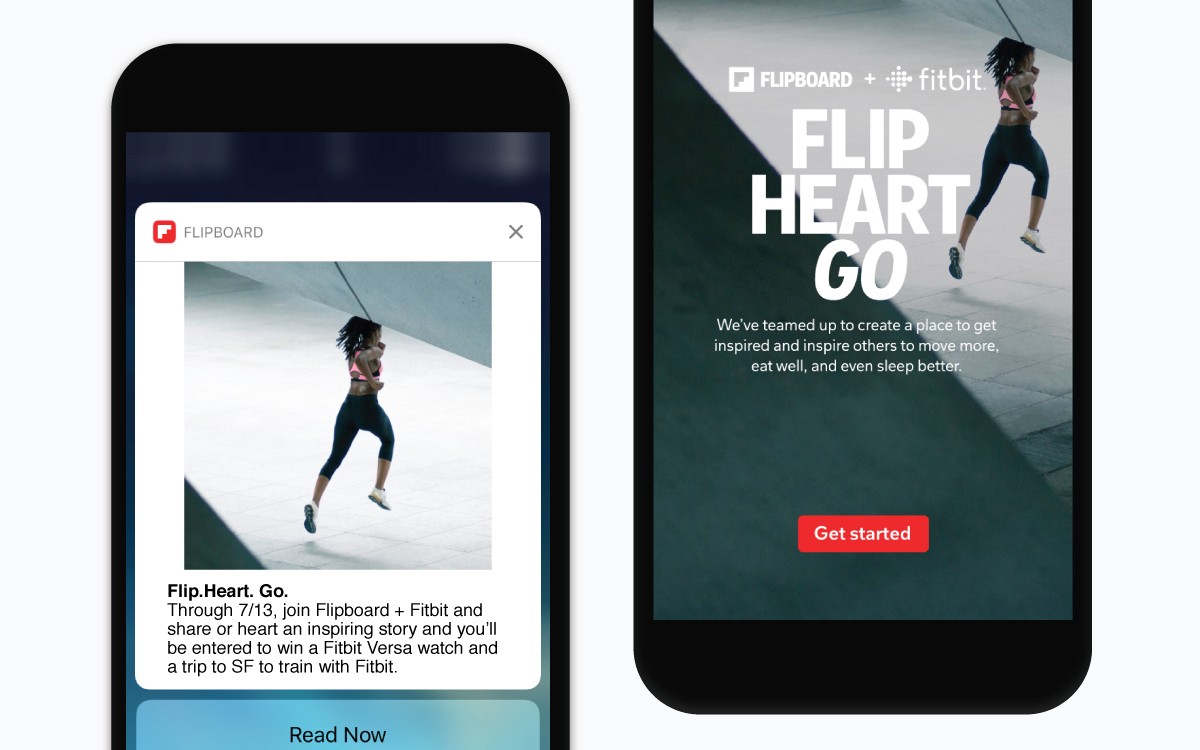 During the course of five weeks, more than 2,500 stories and articles were shared to the group, producing almost 24,000 engagements (likes, comments, re-shares). Members often reflected on their personal fitness journey and provided words of encouragement to others.

“About 2.5 years ago, I really let my weight creep up there to a place where I was truly unhappy…and then I realized it was because I was sitting at my desk all day. I started making sure I hit 10k steps a day with my Fitbit — taking little 15-minute-walks when I could throughout the day. This small change made such a difference — and it ended up encouraging a lot of other healthy habits. I’m now down 40 pounds and still going strong.”

Each week, three lucky participants were randomly selected to win a Fitbit Versa watch. While the sweepstakes helped motivate members to engage with the group, the real value was the content in the group itself. Below are some quotes from the weekly winners:

“I’m both surprised and incredibly happy to have won. The contest/campaign was a lot of fun, and got me reading more about health and fitness (and actually doing something about it), so whether or not I won anything, I got something good out of participating… I look forward to continuing to read, post, and enjoy the content in the Flip. Heart. Go. community.” — Scott H.

“Wow. I was pleasantly surprised to hear from you about being randomly selected to win this amazing watch. I love Flipboard in general and am especially fond of health-related flips, but winning something like this is very exciting. Thanks for running this sweepstakes and continuing to make the Flipboard community the place to be! ”— Frank H.

Fitbit and Flipboard also surprised the grand prize winner, Jenia, on a video call. Watch her reaction as she learns about her upcoming trip to San Francisco to train with Fitbit.

The success of this co-promotion is deeply rooted in brand synergy and audience alignment, as Flipboard and Fitbit both attract an audience passionate about #mindfulness and #self-improvement.

The creation of a supportive, inspiring community helped create meaningful user engagement and generate excitement around an enticing grand prize. With the help of various media channels, we were able to scale the campaign and achieve the goals of both Fitbit and Flipboard.

A huge thank-you to James Kuo and Nick Rezendes from Fitbit for helping bring this co-marketing effort to life.

The community remains open on Flipboard (now named Better Self Community Group), so members can continue sharing stories that inspire themselves and others to live healthier.