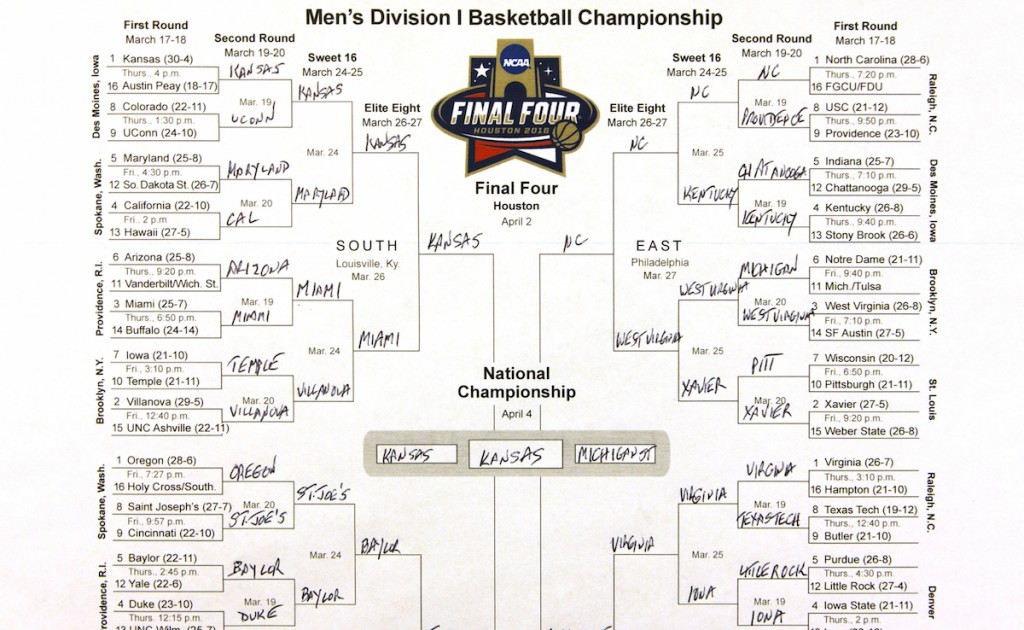 The bracket of the NCAA college basketball tournament, taken in New York on Sunday, March 13, 2016. The filled out bracket is one man’s opinion. (AP Photo/Hiro Komae)

Kansas was the top-ranked team in the N.C.A.A. men’s basketball tournament field announced Sunday night, followed by North Carolina, Virginia and Oregon. The Big 12, Big Ten, A.C.C. and Pac-12 each placed seven teams in the bracket, while the Big East placed two teams.

There were some surprises, but few teams stood apart from the pack heading into the biggest period in college basketball. Use the following topics to help fill out your brackets before the games start Thursday.

March Madness: There are over nine quintilion different bracket combinations to be made with the 64 competing teams. Get advice from the wisest analysts with this topic.

Kansas Jayhawks: The top ranked team will play Thursday night. Find out if the team, who’s in the tournament for the 27th consecutive year, will build on their 30-4 season record.

North Carolina Tarheels: The 28-6 Tarheels will play Thursday in Raleigh. Will North Carolina be hurt by the team’s difficulty with 3-point shooting?

Oregon Ducks: The Pac-12 championship team, and one of the nation’s hottest teams, faces off with Virginia Commonwealth University (VCU) on Friday.

Virginia Cavaliers: The A.C.C. runner-up Virginia (26-7), with their smothering defense, will play Hampton (21-10) Thursday. Track their first game and see what comes next.

Use the search tab to find your team’s topic and follow along on the road to the Final Four.