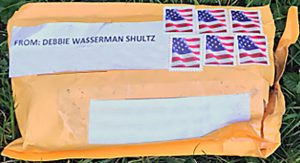 The exterior of one of the suspicious packages sent to multiple locations in the U.S., appears in this handout photo provided by the Federal Bureau of Investigation, October 24, 2018. The mailing address and return address have been edited out of the photo at source. FBI/Handout via REUTERS

Saudi Arabia’s government says that U.S.-Saudi journalist Jamal Khashoggi’s murder was a “premeditated” act. At least 18 Saudi security and intelligence officers, as well as royal advisers, have either been fired or arrested as part of the Saudi investigation. The admission came after weeks of changing stories.

President Trump announced plans to withdraw the U.S. from a nuclear weapons treaty with Russia that oversees intermediate-range missile use. He accused Russia of violating the treaty’s terms and said he would not rejoin unless China was also regulated.

The caravan of thousands of Central American migrants continued their trek towards the United States, crossing the Mexico-Guatemala border, with many either requesting asylum in Mexico or turning back from exhaustion. Having already threatened to slash humanitarian aid to Honduras if immigrants did not halt their journey, President Trump is considering executive action to bar immigration and deny asylum requests at the U.S.-Mexico border. He had also requested that more troops be sent to help with border enforcement.

Out in the Pacific Ocean, the U.S. commonwealth of the Northern Mariana Islands suffered major damage from Super Typhoon Yutu, which now heads west towards Southeast Asia, with residents of the Philippines and Taiwan monitoring the storm as it approaches.

President Trump took aim at Medicare drug prices with a proposal to lower costs by directly negotiating with drug companies. The plan would be a pilot program and would bypass Congress. Pharmacy drugs would largely not be affected, but doctor-prescribed drugs and hospital treatments for conditions like cancer and rheumatoid arthritis would.

Retired Supreme Court Justice Sandra Day O’Connor announced in a public letter that she was bowing out of public life due to suffering from dementia and possibly Alzheimer’s disease. The 88-year-old was the first woman on the Supreme Court.

Google faced a public reckoning when The New York Times revealed the company shielded several company executives from sexual misconduct allegations and paid them to leave. CEO Sundar Pichai simultaneously admitted and defended the company in a memo to employees, noting that that they had fired 48 people over the last two years for sexual harassment, none of whom received financial payouts.

NBC News “Today” host and former Fox News personality Megyn Kelly will not be returning to the morning show after her comments defending blackface — the practice of light-skinned individuals darkening their skin with paint in order to portray black individuals — sparked a wave of backlash.

Top line: “Federal authorities made an arrest on Friday in connection with the nationwide bombing campaign against outspoken critics of President Trump, a significant breakthrough in a case that has gripped the country in the days leading up to the midterm elections. A law enforcement official identified the suspect as Cesar Sayoc, Jr., 56, of Aventura, Fla, just north of Miami. Mr. Sayoc, a registered Republican, has a lengthy criminal history in Florida dating back to 1991 that includes felony theft, drug and fraud charges, as well as being arrested and accused of threatening to use a bomb, public records show.”” 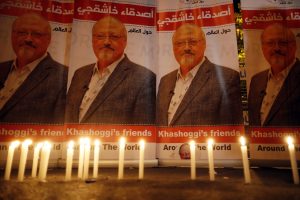 Candles, lit by activists, protesting the killing of Saudi journalist Jamal Khashoggi, are placed outside Saudi Arabia’s consulate, in Istanbul, during a candlelight vigil, Thursday, Oct. 25, 2018. A group of Arab and international public, political and media figures are establishing a global association called “Khashoggi’s Friends Around the World”; “to achieve justice for the freedom martyr”.(AP Photo/Lefteris Pitarakis)

Top line: “The killing of the Saudi journalist Jamal Khashoggi in Saudi Arabia’s Istanbul consulate was premeditated, the country’s attorney general said Thursday, in what marks a further significant shift in the Saudi version of events. According to a statement posted by the Saudi state news agency, the latest evolution in the official Saudi narrative around Khashoggi’s death came after new information was received from Turkish investigators.”

3. What the INF Treaty means for the U.S. and Europe — and why Trump mentioned China – The Washington Post, James J. Cameron

Top line: “President Trump has announced the United States plans to withdraw from the U.S.-Russian Intermediate-range Nuclear Forces (INF) Treaty. Speaking in Nevada, Trump accused Moscow of “violating” the treaty and said he would reconsider only if both Russia and China limited their forces. National security adviser John Bolton is in Moscow this week to meet with Russian officials and reportedly may meet with Russian President Vladimir Putin. What does the U.S. move mean? Here are five things to consider.” 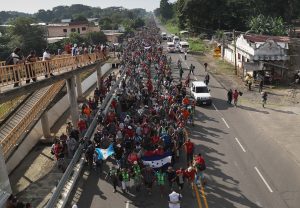 CIUDAD HIDALGO, MEXICO – OCTOBER 21: A migrant caravan walks into the interior of Mexico from the Guatemalan border on October 21, 2018 near Ciudad Hidalgo, Mexico The caravan of thousands of Central Americans plans to eventually reach the United States. U.S. President Donald Trump has threatened to cancel the recent trade deal with Mexico and withhold aid to Central American countries if the caravan isn’t stopped before reaching the U.S. (Photo by John Moore/Getty Images)

Top line: “President Donald Trump is considering executive action that would bar migrants from crossing the U.S.-Mexico border and seeking asylum, a senior administration official confirmed late Thursday to ABC News. Such a move would almost certainly be challenged in court. The push comes just 11 days before crucial midterm elections in which Democrats believe they have a chance to flip the House and several state governor races. That is a scenario that would present a serious challenge to Trump’s agenda, which he has recently described as a “nationalist” approach that puts “America first.”” 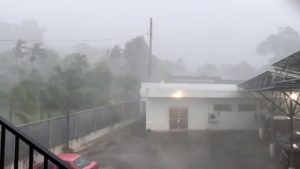 A storm batters buildings as Super Typhoon Yutu descends upon Saipan, Northern Mariana Islands, U.S., October 24, 2018, in this still image taken from a video obtained from social media. @emmaninspn/via REUTERS THIS IMAGE HAS BEEN SUPPLIED BY A THIRD PARTY. MANDATORY CREDIT. NO RESALES. NO ARCHIVES.

Top line: “Super Typhoon Yutu is on its way to Southeast Asia, after devastating part of the commonwealth of the Northern Mariana Islands. “Many homes have been destroyed,” says the mayor of Tinian, an island in the U.S. Pacific territory. Yutu brought sustained winds of at least 165 to 175 mph when it passed directly over the islands of Tinian and Saipan on Wednesday. As it heads west, it was still packing winds of 165 mph — an intensity that it is expected to maintain through Friday, according to emergency officials in the Marianas. Yutu is now heading west-northwest toward the northern portion of the Philippines. Weather officials in Taiwan are also monitoring the storm. Outlying parts of the Philippines could see its first tropical cyclone warning “as early as Monday morning,” the country’s weather agency says.”

Top line: “President Donald Trump on Thursday unveiled a plan to overhaul how Medicare pays for certain drugs, attacking “foreign freeloaders” that he says have driven up costs in the U.S. The bold move addresses a Trump campaign pledge to lower drug prices, just days before the tightly contested midterm elections in which health care is playing a pivotal role. The proposal would bypass Congress by using a pilot program to test three ways to lower the costs of drugs — including negotiating for some drugs directly administered by doctors to keep them in line with the far lower prices paid in many other countries, where governments often take an active role in setting prices. The proposal applies only to drugs administered in doctors’ offices and outpatient hospital departments — medicines like cancer treatments and injectable treatments for rheumatoid arthritis or eye conditions. It won’t affect most prescriptions purchased by patients at pharmacies.”

Top line: “Sandra Day O’Connor, the first woman on the Supreme Court, announced Tuesday in a frank and personal letter that she has been diagnosed with “the beginning stages of dementia, probably Alzheimer’s disease.” The 88-year-old’s letter was addressed to “Friends and fellow Americans.” And it was a farewell of sorts from a woman who was not only a trailblazer for women in the law but also for much of her quarter century on the high court a key vote on issues central to American life. O’Connor said doctors diagnosed her some time ago and that as her condition has progressed she is “no longer able to participate in public life.””

Top line: “Google CEO Sundar Pichai sent an email to all Google employees Thursday saying the company has fired 48 people over the last two years for sexual harassment, including 13 “senior managers and above,” and none received an exit package. The email, obtained by CNBC, was in response to a bombshell New York Times story that said Google had shielded a handful of company executives, including Android creator Andy Rubin, from sexual misconduct allegations and offered massive payouts to leave.”

Top line: “A key Senate chairman asked the Justice Department on Thursday to investigate Julie Swetnick and her lawyer, Michael Avenatti, for allegedly false statements made during the confirmation process for Justice Brett Kavanaugh. Senate Judiciary Chairman Chuck Grassley, R-Iowa, asked Attorney General Jeff Sessions and the FBI to investigate potential conspiracy, false statements and obstruction of Congress. Grassley said it was a request for investigation and not a criminal allegation. Avenatti welcomed further investigation. “Senator Grassley has just made a major mistake,” Avenatti said. “Let the investigation into Kavanaugh and his lies begin.” Swetnick was one of three women who accused Kavanaugh of sexual misconduct during high school and college before the Senate confirmed him Oct. 6.”

Top line: “The announcement ends a tumultuous 13-month run for Kelly as part of the “Today” lineup. Kelly rose to become one of the most recognizable TV hosts in the U.S. during her 12 years at Fox News, where she hosted an evening show, “The Kelly File.” Kelly’s hiring by NBC News in January 2017 made waves across the media industry in part for her sizable contract, reportedly worth $69 million over three years. The show’s ratings got off to a slow start, with Kelly attracting a smaller audience than the when her predecessors, Tamron Hall and Al Roker, hosted the 9 a.m. hour. Kelly recently drew harsh criticism after a segment on Tuesday about Halloween costumes in which she questioned why blackface was considered racially insensitive.”

~HeatherC is reading about Technology’s Social Impact by The Atlantic