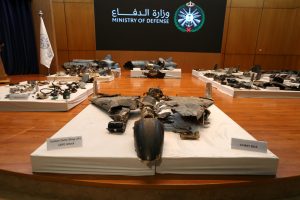 Remains of the missiles which Saudi government says were used to attack an Aramco oil facility, are displayed during a news conference in Riyadh, Saudi Arabia September 18, 2019. REUTERS/Hamad I Mohammed

Tensions between the United States and Iran continued to escalate this week after Saudi Arabian oil infrastructure was bombed, slowing oil exports. In response, U.S. and Iranian leaders had a war of words and President Donald Trump ordered more sanctions against Iran’s financial system.

Over in Israel, Prime Minister Benjamin Netanyahu failed to win a majority of seats in the latest election, threatening his ability to remain in power.

Trump had a busy week, naming hostage negotiator Robert C. O’Brien to replace John Bolton as national security adviser, and becoming the subject of another scandal for allegedly pressuring Ukraine to investigate former Vice President Joe Biden and his son Hunter in order to help his own re-election campaign.

Climate change was also in the news, with millions of children around the world protesting government inaction on the issue, and with Trump also moving to stop California and over a dozen states from setting stricter auto emissions standards than the federal government. In response, 23 states sued to halt his effort.

An eighth death in the U.S. was attributed to smoking potentially tainted e-cigarettes, and the number of those ill has increased to 530, sparking a criminal probe by the Food and Drug Administration, as well as business backlash.

In other business news, the Federal Reserve lowered interest rates for the second time in two months, General Motors workers went on strike, and Oxycontin maker Purdue Pharma filed for bankruptcy amidst facing thousands of lawsuits.

Top line: “The United States on Friday imposed another round of sanctions on Tehran, including on Iran’s central bank and a development fund, following last week’s attacks on oil facilities in Saudi Arabia that Riyadh and U.S. officials have blamed on Iran. Iran denies involvement in the attacks, which initially halved oil output from Saudi Arabia, the world’s largest petroleum exporter. Responsibility was claimed by Yemen’s Houthi movement, an Iran-aligned group fighting a Saudi-led alliance in Yemen’s civil war. Analysts cast doubt on how hard the new measures would hit Tehran given that earlier sanctions have already dried up Iranian oil revenues and cut Iranian banks’ ties to the financial world.” 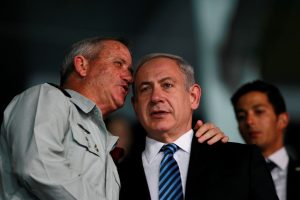 Top line: “Benjamin Netanyahu is furiously manoeuvring to cling to office after his rival Benny Gantz refused to serve under him in a government of national unity following an inconclusive election. Gantz’s Blue and White alliance is two seats ahead of the Israeli prime minister’s Likud party, according to results published by Israeli media with 97% of the vote counted. Neither bloc has an obvious path to form a majority coalition, and Netanyahu called for them to join together in a unity government, hinting that he might be willing to accept a power-sharing arrangement with Gantz, a precedent found in the rotation of the prime minister’s office between Yitzhak Shamir and Shimon Peres in the mid-1980s. Gantz, a former military chief, said he should lead the next government because his alliance won the most seats.”

Top line: “President Trump declined to say Friday whether he had discussed Joe Biden or his family during a July phone call with Ukrainian President Volodymyr Zelensky that has drawn intense scrutiny, but he told reporters that “someone ought to look into” the former vice president. Trump’s call with Zelensky is under investigation by House Democrats, who are examining whether Trump and his attorney, Rudolph W. Giuliani, sought to manipulate the Ukrainian government into helping Trump’s reelection campaign by seeking information that could be damaging to Biden, a Democratic presidential candidate. The call has drawn heightened attention in recent days amid revelations that an intelligence official filed a whistleblower complaint that involved communications with a foreign leader and that the communication centered on Ukraine, according to two people familiar with the matter.” 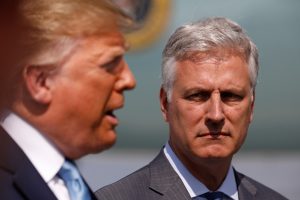 Top line: “President Trump has named Robert C. O’Brien, who has been his special envoy for hostage affairs, to be his new national security adviser. Trump made the announcement in a Wednesday morning tweet. O’Brien replaces John Bolton, who was forced out by Trump earlier this month. O’Brien will be the president’s fourth national security adviser in less than three years in office. Trump praised O’Brien when the two men appeared together before reporters in Los Angeles. Prior to his appointment, O’Brien had been perhaps best known for his efforts to win the release of American rapper A$AP Rocky, who was held in a Swedish jail after being arrested for his involvement in a Stockholm brawl.”

Top line: “California sued Friday to stop the Trump administration from revoking its authority to set greenhouse gas emission and fuel economy standards for cars and trucks, enlisting help from 22 other states in a battle that will shape a key component of the nation’s climate policy. Federal law sets standards for how much pollution can come from cars and trucks. But since the 1970s, California has been permitted to set tougher rules because it has the most cars and struggles to meet air quality standards. On Thursday, the National Highway Traffic Safety Administration withdrew California’s waiver. The Trump administration’s decision does not just affect California. Thirteen other states, plus the District of Columbia, have adopted California’s standards.” 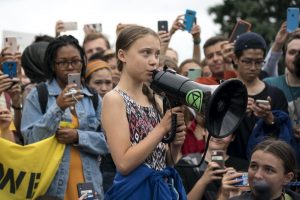 Swedish youth climate activist Greta Thunberg during a strike against climate change outside the White House. The strike is part of Thunberg’s six-day visit to Washington ahead of the “Global Climate Strikes” Friday. (Sarah Silbiger/Getty Images)

Top line: “Anxious about their future on a hotter planet, angry at world leaders for failing to arrest the crisis, hundreds of thousands of young people poured into the streets on Friday for a day of global climate protest. Strikes were planned in each of the 50 United States. By late morning, protesters across the Eastern Seaboard were streaming out of schools and office buildings, pooling around steps of local city halls. The police in Baltimore blocked roads as students arrived on foot, scooter and skateboard. In St. Petersburg, Fla., about 200 protesters convened at City Hall, including one dressed as a polar bear with a sign that said “Climate Action Now.” Many websites went dark in solidarity with the protests or posted statements of support. Groups of scientists, doctors and technology sector workers were also joining the strikes in various locations. Demonstrations in North and South America will be the culmination of a day of global strikes that began almost 24 hours earlier as morning broke in the Asia-Pacific region.”

Top line: “The Federal Drug Administration has been using their criminal investigators to look into the rash of illnesses surrounding the use of vaping products, Mitch Zeller, the director of the Center for Tobacco Products for the FDA, said in a press conference on Thursday. The investigators will not be pursuing any individuals or companies and are not focused on prosecuting anyone at this time, Zeller said. Of 530 confirmed and probable lung injuries so far, three-quarters of the victims were male and two-thirds were between the ages of 18 and 34. Despite rampant fears among parents about youth vaping, only 16% of vaping victims are younger than 18 years old, according to Dr. Anne Schuchat, principal deputy director at the U.S. Centers for Disease Control and Prevention. Eight individuals have died in the ongoing outbreak, with Missouri announcing the latest death on Thursday afternoon.”

Top line: “For the second time in two months, the Federal Reserve on Wednesday agreed to press down on the economy’s accelerator to keep the 10-year-old expansion chugging along. A divided Fed lowered its benchmark interest rate by another quarter percentage point to a range of 1.75% to 2% in an effort to stave off a possible recession triggered by a global economic slowdown and the U.S. trade war with China. In a statement after a two-day meeting, the central bank also signaled the strong possibility of another rate cut later this year, citing “uncertainties” about its outlook and vowing to “act as appropriate to sustain the expansion.””

Top line: “Negotiations are ongoing between the UAW and GM as roughly 48,000 union members walk picket lines on strike. The strike is estimated to be costing GM upward of $100 million a day in lost production. GM’s usage of temporary workers, potential closure of plants and health care contributions remain major sticking points.”

10. Purdue Pharma has filed for bankruptcy as part of a plan to settle opioid lawsuits. Here’s what we know – CNN, Darran Simon, Melanie Schuman

Top line: “Purdue Pharma, the maker of the painkiller OxyContin, said it has filed for bankruptcy as part of a plan to settle lawsuits accusing the company of fueling the opioid crisis. Here’s what we know about the bankruptcy filing.”

~ HeatherC is reading You Should See Someone by Huffington Post