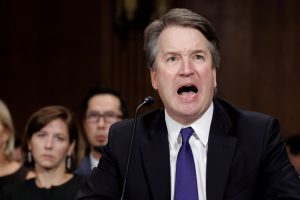 The week’s news was dominated by the controversy surrounding Supreme Court nominee Brett Kavanaugh and Dr. Christine Blasey Ford. Ford accused him of sexually assaulting her when they were teenagers. Both individuals testified at a nine-hour public hearing before the Senate Judiciary Committee that was watched and analyzed around the world.

Less than 24 hours later, the 21-member Senate Judiciary Committee voted 11-10 to advance Kavanaugh to a confirmation vote by the full Senate — but Senator Jeff Flake, who provided a crucial swing vote, made his support contingent on a week-long delay to allow for an FBI investigation into Ford’s accusations and Kavanaugh’s teenage conduct. Senate Republicans agreed to his request and asked the White House for authorization.

Another sexual assault case that captivated the nation reached a conclusion, with the sentencing of actor Bill Cosby to 3 to 10 years in state prison for drugging and sexually assaulting a Pennsylvania woman at his home 14 years ago.

President Donald Trump spent most of the week in New York for a meeting of the United Nations. During a speech he emphasized a commitment to his “America First” policy, criticized Iran and Venezuela, and praised North Korean leader Kim Jong Un.

As a result of the country’s focus on the Kavanaugh confirmation proceedings, Trump postponed his meeting with Deputy Attorney General Rod Rosenstein, who oversees the special counsel investigation into Russian meddling in the 2016 presidential election.

In business news, Tesla founder Elon Musk is being sued for fraud by the Securities and Exchange Commission, which oversees financial regulation, for allegedly making “false and misleading” statements and failing to properly notify regulators of material company events.

In online data breach news, Uber agreed to a $148 million settlement to users whose data was breached in 2016, while Facebook revealed a massive data breach affecting 50 million users that allowed hackers to use accounts as if they were the verified account holder. They stated the vulnerability has been fixed and the company is working with the FBI to investigate.

Top line: “Senate Republican leaders agreed Friday to reopen the FBI background investigation of Judge Brett M. Kavanaugh after two key Republicans suggested they would not vote to confirm him to the Supreme Court without additional information on his alleged sexual misconduct while he was a teenager. The announcement followed a vote along party lines by the Senate Judiciary Committee to advance Kavanaugh’s nomination, after securing a vote from Sen. Jeff Flake (R-Ariz.), who asked for a delay of up to a week before the full Senate decides the judge’s fate.” 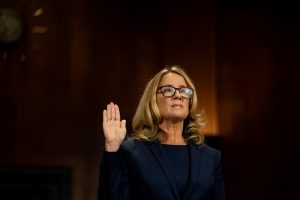 Top line: “Thursday’s Senate Judiciary Committee hearing on sexual assault allegations against Supreme Court nominee Brett Kavanaugh riveted Washington and the nation with hours of fiery, emotional testimony from the judge and Christine Blasey Ford, the woman accusing him of sexual assault when they were high schoolers. Kavanaugh denied the accusation. Here are some takeaways from the extraordinary hearing.” 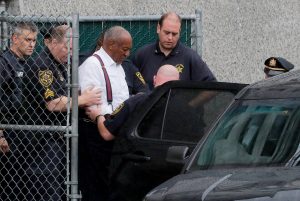 Top line: “Bill Cosby, once known as “America’s Dad,” was sentenced Tuesday to three to 10 years in a state prison for drugging and sexually assaulting Andrea Constand at his home 14 years ago. Cosby’s bail was revoked and he was escorted from the courthouse in handcuffs. Cosby, convicted in April of aggravated indecent assault, declined to speak to the court prior to the sentence. His attorneys have said they intend to file an appeal.”

Top line: “President Trump thrust his commitment to an “America First” foreign policy back onto the United Nations General Assembly on Tuesday. But in his second address on this diplomatic stage, he sounded as eager to claim credit for his achievements after 20 months in office, as he was to disrupt the world order. If Mr. Trump had changed, so had his audience — no longer as daunted by the insurgent figure who left them slack-jawed last year when he vowed to “crush loser terrorists,” mocked North Korea’s leader as “Rocket Man” and declared that parts of the world “are going to hell.” This time, emissaries from around the world listened quietly as Mr. Trump fulminated at foes like Iran and failing states like Venezuela. They nodded as he singled out an enemy-turned-partner, Kim Jong-un of North Korea, expressing optimism for a diplomatic opening that would have seemed far-fetched even a year ago. But when Mr. Trump declared, “In less than two years, my administration has accomplished more than almost any administration in the history of our country,” the crowd broke into murmurs and laughter.” 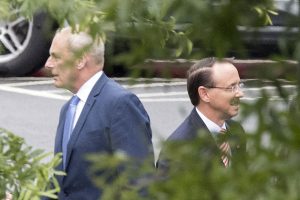 White House Chief of Staff John Kelly (L) and Assistant Attorney General Rod Rosenstein (R) step away following a a meeting at the White House in Washington, DC, on September 24, 2018. – Rosenstein, overseeing the probe into alleged collusion between Russia and President Donald Trump, was received Monday at the White House as US media reported he was about to resign or be fired. The departure of Rosenstein — possibly giving Trump an opportunity to get more of a loyalist as a replacement — would dramatically rock the probe into whether Russia conspired with Trump’s campaign to aid his 2016 shock presidential election victory. (Photo by JIM WATSON/AFP/Getty Images)

Top line: “Tesla CEO Elon Musk has been sued by the Securities and Exchange Commission for fraud, according to court documents filed Thursday. Sources close to the company told CNBC the company was also expecting to be sued, though Tesla was not named as a defendant in the complaint. The SEC complaint alleges that Musk issued “false and misleading” statements and failed to properly notify regulators of material company events. Among other remedies, the SEC is seeking to bar Musk from serving as an officer or director of a publicly traded company if found guilty.”

Top line: “Facebook disclosed that hackers stole data from 50 million people on Friday. In a blog post, Facebook’s vice president of product management Guy Rosen said that the company’s engineering team “discovered a security issue affecting almost 50 million accounts.” “It’s clear that attackers exploited a vulnerability in Facebook’s code that impacted “View As,” a feature that lets people see what their own profile looks like to someone else,” Rosen wrote. “This allowed them to steal Facebook access tokens which they could then use to take over people’s accounts.” The vulnerability exploited by the hackers is fixed and Facebook is working with the FBI, Rosen said on the call. Facebook has a total of roughly 2 billion users, so the breach impacted approximately 2.5 percent of Facebook users.”

Top line: “Uber Technologies Inc. will pay $148 million to settle claims related to a large-scale data breach that exposed the personal information of more than 25 million of its U.S. users. The settlement, spanning all 50 states and the District of Columbia, is the biggest data-breach payout in history, and marks the most sweeping rebuke by regulators against the San Francisco-based company, which earned a reputation for skirting rules in its push to dominate the ride-hailing market. The states’ agreement stemmed from data compromised in 2016 by hackers, who obtained 607,000 U.S. driver’s license numbers as well as tens of millions of consumer email addresses and phone numbers, a leak that Uber failed to disclose for more than a year after discovering the attack.”

Top line: “Twenty-First Century Fox Inc agreed to sell its 39 percent stake in Sky PLC to Comcast Corp, the companies said on Wednesday, a deal that completes the U.S. cable group’s takeover and ends Rupert Murdoch’s relationship with the UK-based satellite broadcaster. Comcast outbid Fox in an auction to take control of pay-TV group Sky on Saturday, with a $40 billion offer price. That price includes Fox’s 39 percent stake, which the offer valued at 11.63 billion pounds ($15.31 billion).”

Top line: “SiriusXM and Pandora have announced acquisition plans before the stock market opens. SiriusXM is offering to acquire Pandora for $3.5 billion in stock, or $10.14 per share. Pandora would continue to exist as an independent service. Both the Pandora board and the SiriusXM board have approved the plan. But the transaction isn’t going to happen right away. As part of the deal, Pandora negotiated a “go-shop” provision, which means that Pandora’s board can still evaluate other offers. The acquisition is expected to close in the first quarter of 2019.”

~HeatherC is reading about Vote 2018