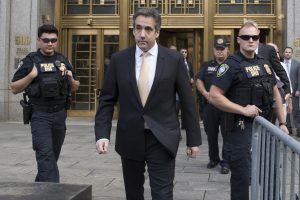 It was a busy week in the political and legal worlds.

Former long-time Trump personal lawyer Michael Cohen was also in court, pleading guilty to campaign finance violations for arranging a payoff to two women to keep silent about alleged affairs they had had with Trump, in order to influence the election’s outcome. Cohen also implicated Trump in his statement.

Pope Francis wrote an official letter about the clergy sex abuse scandals roiling Pennsylvania, as well as other nations around the world. The letter came days after he expressed his support for the thousands of victims and condemned the 300-plus “predator” priests accused.

Duncan Hunter, a Republican congressman from California, pleaded not guilty to misuse of campaign funds and suggested that blame should be placed on his wife, who was also arrested alongside him.

A sentence of 63 months in prison was handed down for former NSA contractor Reality Winner, the 26-year-old Georgia woman who was arrested in 2017 and charged with sending classified information to a media outlet, revealing details of Russian attempts to hack the 2016 election.

Ohio State suspended football coach Urban Meyer for his handling of domestic abuse allegations against another former coach after public backlash. The suspension is for three games without pay.

Facebook continued their efforts to crack down on disinformation campaigns, removing 652 pages with Iranian and Russian origins that sought to sow discord in the U.S. and other nations over everything from politics to foreign policy. Twitter and Alphabet also took action on their ends to dismantle accounts dealing in similar propaganda and misinformation.

In world news, Venezuelans struggled with a 95 percent currency devaluation following their president’s introduction of a new form of money, Greece ended an eight-year period of bailouts, and India faced a growing death toll approaching 400 lives lost after historic flooding. 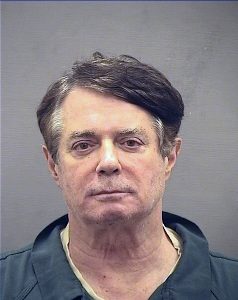 Top line: “Paul Manafort being convicted of eight crimes in a federal court Tuesday isn’t the end of his legal ordeal. Several questions remain, including what this means for President Donald Trump, how this affects special counsel Robert Mueller’s investigation and what’s next for Trump’s former campaign chairman. Here are five takeaways.”

Top line: “You could easily be confused by the sheer number and variety of the criminal charges that Michael D. Cohen, President Trump’s onetime fixer and personal lawyer, pleaded guilty to on Tuesday in Federal District Court in Manhattan. After all, the combative Mr. Cohen, a former vice president at the Trump Organization, was accused of violating laws that involved his taxi business, his financial dealings with at least three banks and — it was the headline allegation — his secretive efforts to influence the 2016 presidential election. He admitted joining forces with the nation’s best-known supermarket tabloid to buy the silence of at least two women who claimed they had affairs with Mr. Trump. The charging documents describe a universe of shady dealings and unsavory characters. None of the revelations seem helpful to Mr. Trump. Here are six takeaways from what happened in court — and what was disclosed in court papers.” 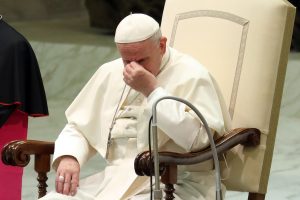 3. Pope Francis On Clergy Sex Abuse: ‘We Showed No Care For The Little Ones’ – NPR, Colin Dwyer

Top line: “Nearly a week after a Pennsylvania grand jury released its roughly 900-page report on sexual abuse by clergy, the leader of the Roman Catholic Church has penned a letter condemning the alleged misconduct and pledging repentance. The “atrocities” Francis refers to were laid out in harrowing detail by the grand jury report, which used the church’s own records to conclude that more than 1,000 credible victims had been abused by some 300 “predator priests” across eight decades in Pennsylvania. What’s more, the report explained how the church apparatus enabled and covered up the abuse, often responding to complaints with cursory investigations and leniency toward the alleged abusers.”

Top line: “A Republican congressman from California and his wife pleaded not guilty on Thursday to misusing $250,000 in campaign funds for personal expenses and filing false campaign finance records with the Federal Election Commission. Rep. Duncan Hunter and his wife, Margaret, entered their not guilty pleas in federal court in San Diego. He and his wife are accused of illegally using campaign funds between 2009 and 2016 for family vacations to Italy, Hawaii, Phoenix and Boise, Idaho, prosecutors said. They also allegedly used campaign funds to pay for school tuition, dental work, theater tickets, and domestic and international travel for almost a dozen relatives, according to prosecutors.”

Top line: “A former government contractor who pleaded guilty to leaking U.S. secrets about Russia’s attempts to hack the 2016 presidential election was sentenced Thursday to five years and three months in prison. It was the sentence that prosecutors had recommended — the longest ever for a federal crime involving leaks to the news media — in the plea deal for Reality Winner, the Georgia woman at the center of the case. Winner was also sentenced to three years of supervised release and no fine, except for a $100 special assessment fee. The crime carried a maximum penalty of 10 years. 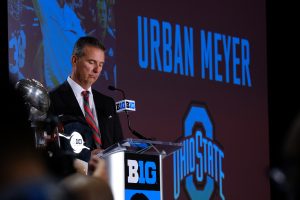 Top line: “In the hours after Ohio State announced that football coach Urban Meyer would be suspended three games for his handling of domestic abuse allegations against former wide receivers coach Zach Smith, the school also released a 23-page report detailing the findings of its investigation. Here are a few of the most significant takeaways, excerpts and findings from that investigation, which was led by former U.S. Attorney Mary Jo White.”

Top line: “Iran was behind a sprawling disinformation operation on Facebook that targeted hundreds of thousands of people around the world, the social media company said Tuesday night, underscoring Silicon Valley’s increasingly global war on disinformation. The Iranian effort dated to 2011 and had ties to state media operations in that country, Facebook said, involving hundreds of accounts on both Facebook and its sister site, Instagram. The effort also spread to Twitter and YouTube, with accounts that both companies said they also removed. The fake Iranian accounts bought ads on Facebook and used it to organize events. Facebook also deleted some unrelated fake accounts originating in Russia, which has been the main focus of reporting on disinformation operations targeting the United States.”

Top line: “Beaten-down Venezuela on Tuesday began confronting a 95 percent currency devaluation and a regimen of economic controls that, after years of hunger and hyperinflation, landed like a hassle rather than a cataclysm. Caracas returned to work after a holiday weekend that saw President Nicolas Maduro announce the devaluation and a minimum wage hike of more than 3,000 percent, decisions that were a tacit acceptance of the ubiquitous black-market exchange rate. They accompanied the roll-out of new banknotes that dropped five zeroes — the second time such a measure was implemented in the past decade — to simplify transactions. Many Venezuelans waited outside banks to get their hands on the new sovereign bolivares after months of living almost cashless.”

Top line: “Greece ended an eight-year stretch of bailouts Monday, but it will be years before the economy fully recovers from a collapse that at one point left the country on the brink of exiting the euro. Moreover, economists fear that Greece is exiting its bailouts just as tailwinds from global — and eurozone — economic growth are fading and as turmoil elsewhere in the region, notably Italy, poses new challenges for policy makers.”

Top line: “The death toll in India’s southern state of Kerala rose on Monday to nearly 400 after its worst flood in a century, as authorities handed out medicine and disinfectants to ward off disease in thousands of relief camps. Dozens of people are missing and 1.2 million are sheltering in the camps, state officials said, as water receded and a huge clean-up gathered pace.”

~HeatherC is reading about On A Good Note