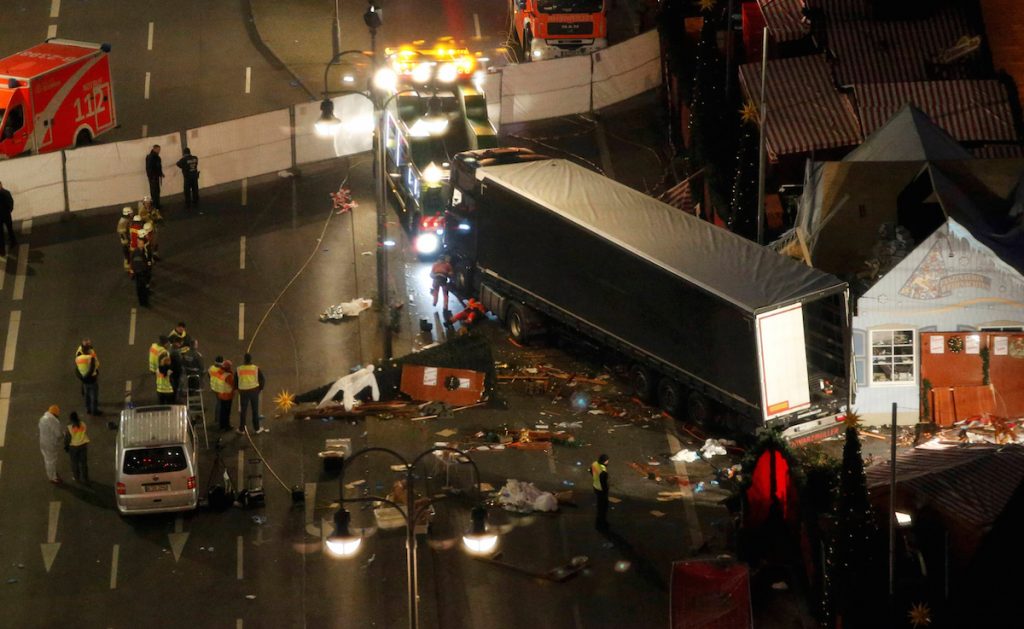 A tow truck operates at the scene where a truck ploughed through a crowd at a Christmas market on Breitscheidplatz square near the fashionable Kurfuerstendamm avenue in the west of Berlin, Germany, December 20, 2016. REUTERS/Fabrizio Bensch

Terror struck major cities throughout the world this week, including at a Christmas market in Berlin and in an art gallery in Ankara, Turkey. President Barack Obama continued to take executive action in the final days of his administration with a ban on oil drilling in large areas of the Atlantic and Arctic oceans. North Carolina declined to repeal the controversial “bathroom bill” and Syria’s President Bashar al-Assad regained control of Aleppo. Read more about these stories and the other biggest news of the week, as it appeared in The Daily Edition.

Top line: “The identity of the Tunisian, Anis Amri, immediately alarmed intelligence officials from Europe to Washington. German officials acknowledged that Mr. Amri was known to have links to a radical Salafist preacher and had been in their custody pending deportation proceedings after being caught with fake papers. He was freed, even though he was considered potentially dangerous by the authorities…As an intense hunt for the man who may be behind Germany’s worst terrorist attack since reunification took on even greater urgency, the authorities were being dogged by questions over what more they should have done to track or detain him. Mr. Amri remains on the run with a reward of 100,000 euros (about $104,000) for information leading to his arrest.”

Top line: “A Turkish police officer who angrily denounced the bloodshed in Syria killed the Russian ambassador to Turkey in Ankara on Monday, shooting the diplomat in front of a room full of horrified spectators at an art gallery in an assassination captured on video and quickly shared around the world. 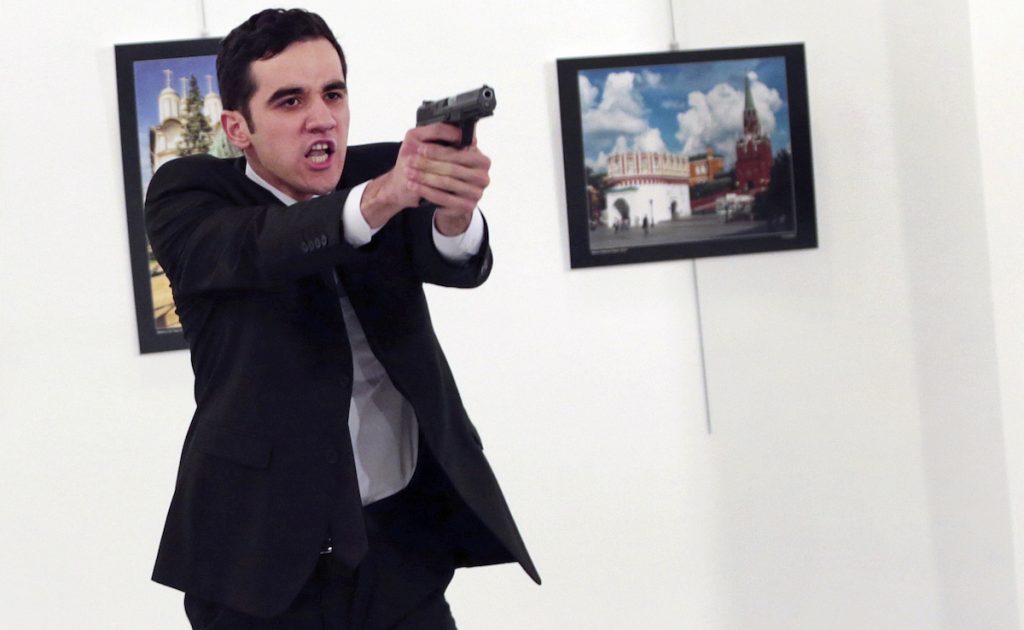 A man identified as Mevlut Mert Altintas holds up a gun after shooting Andrei Karlov, the Russian Ambassador to Turkey, at a photo gallery in Ankara, Turkey, Monday, Dec. 19, 2016. AP Photo/Burhan Ozbilici

Top line: “President Obama moved to solidify his environmental legacy Tuesday by withdrawing hundreds of millions of acres of federally owned land in the Arctic and Atlantic Ocean from new offshore oil and gas drilling.

Obama used a little-known law called the Outer Continental Shelf Lands Act to protect large portions of the Chukchi and Beaufort seas in the Arctic and a string of canyons in the Atlantic stretching from Massachusetts to Virginia. In addition to a five-year moratorium already in place in the Atlantic, removing the canyons from drilling puts much of the eastern seaboard off limits to oil exploration even if companies develop plans to operate around them.”

Top line: “An explosion has ripped through a fireworks market on the northern outskirts of Mexico City, reportedly killing at least 31 people and injuring 70.”

Top line: “North Carolina lawmakers on Wednesday failed to reach a deal to repeal a divisive and costly law restricting protections for transgender people, ending a daylong special session without coming to agreement on anything…That means no end in sight for a crisis that has already helped oust the sitting governor and triggered a boycott of the state by businesses, performers and sports leagues that has cost North Carolina tens of millions of dollars.”

Top line: “The evacuation of civilians and fighters from the last rebel-held part of Aleppo concluded on Thursday after long delays because of frigid weather, putting all of Syria’s industrial capital back in the hands of President Bashar al-Assad’s forces for the first time since 2012…Tens of thousands of people have been removed from eastern Aleppo since Dec. 15. Before the last buses left on Thursday, the Red Cross said that 34,000 people had left the city, including 4,000 fighters who had left in their own vehicles the previous night.”

8. China says it has handed over US drone taken in South China Sea—The Telegraph, Neil Connor

Top line: “China said on Tuesday that it handed back an underwater research drone to the US after it seized it last week, an incident which added to simmering tensions between the world’s biggest militaries.”

Top line: “President-elect Donald Trump began to fill out his senior team in the West Wing on Thursday, naming campaign manager Kellyanne Conway as his counselor and installing Republican National Committee chief strategist Sean Spicer as his press secretary, one of the most public and prominent jobs in the administration.

Top line: “Zsa Zsa Gabor pioneered the art of being famous simply for being famous, which generations of dubious starlets have emulated ever since. She was an open book, having crafted a career from multiple marriages, conspicuous wealth and lavish wisdom about the opposite sex and the good life. And yet there remained an air of exotic mystery, borne perhaps by the accent, the glamour, her coyness about her real age and her insistence on always appearing perfectly coiffed…The jet-setting Hungarian actress and tabloid queen died Sunday at her Los Angeles home after a heart attack, her husband, Fredric von Anhalt, said. She was 99.”

~GabyS is prepping for Hanukkah with Holiday Central