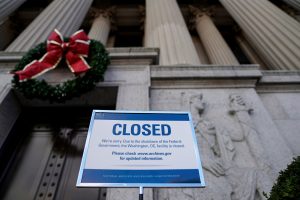 A sign declares the National Archive is closed due to a partial federal government shutdown in Washington, U.S., December 22, 2018. (REUTERS/Joshua Roberts)

The federal government entered a partial shutdown this week after President Trump and Congress could not come to an agreement over border wall funding. Tensions over immigration were also heightened after a second migrant child from Guatemala died in U.S. custody.

Trump visited U.S. troops in Iraq for the first time in his presidency. In Indonesia, over 400 people died and hundreds more are missing after a tsunami, triggered by a volcano eruption, hit residents and tourists.

The Environmental Protection Agency proposed removing limits on mercury and other toxic chemical emissions. However, Obama-era rules will remain in place for now.

Top line: “The partial government shutdown will almost certainly be handed off to a divided government to solve in the new year, as both parties traded blame Friday and President Donald Trump sought to raise the stakes in the weeklong impasse. As agreement eludes Washington in the waning days of the Republican monopoly on power, it sets up the first big confrontation between Trump and newly empowered Democrats. Trump is sticking with his demand for money to build a border wall with Mexico, and Democrats, who take control of the House on Jan. 3, are refusing to give him what he wants. Trump raised the stakes on Friday, reissuing threats to shut the U.S.-Mexico border to pressure Congress to fund the wall and to shut off aid to three Central American countries from which many migrants have fled.” 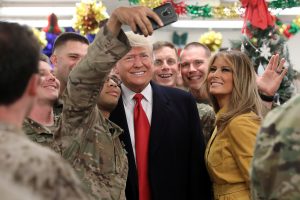 Top line: “President Donald Trump took a whirlwind, secret trip to Iraq this week — and things didn’t go quite as smoothly as planned. In his first visit as president to a conflict zone, Trump stopped off in the country for three hours on Wednesday in order to meet some of the roughly 5,000 US troops stationed there, before continuing on to Germany. As Trump later tweeted, he spent his time in Iraq meeting with US troops at the Al Asad Air Base, shaking hands and signing MAGA hats. However, the president failed to meet with any Iraqi officials while in the country — despite the fact that the US invaded the country in 2003 and has had a continuous troop presence there ever since. The president also reportedly exposed a covert Navy SEAL deployment. According to Newsweek, Trump posed with members of a special operations unit for photographs and then posted a video including this scene on Twitter without blurring out their faces or obscuring their identity — which violates accepted security protocol.”

3. Official: Guatemalan boy who died in U.S. custody tested positive for influenza B, final cause of death remains under investigation – The Washington Post, Maria Sacchetti

Top line: “The deaths have triggered ­finger-pointing between the White House and Democrats over border security, and allegations that the Trump administration is endangering migrant children by detaining them for days in cells meant as way stations for adults. Federal officials say they must screen migrants before releasing them, and have been overwhelmed by a record surge of adults crossing with children. The Department of Homeland Security has launched investigations of the deaths of Felipe and 7-year-old Jakelin Caal, expanded health screenings for detained children and asked the Centers for Disease Control and Prevention to examine why more migrants appear to be getting sick.” 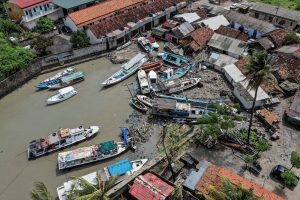 Stranded boats are seen near houses after a tsunami hit at Anyer in Banten, Indonesia, December 24, 2018. (Antara Foto/Muhammad Adimaja/ via REUTERS)

Top line: “Search efforts for the 154 people still missing in the disaster zone of the deadly tsunami that has killed at least 429 people continued on Tuesday, with some officials admitting privately that the chance of finding more survivors alive was slim. A policeman at the resort, large parts of which were obliterated by the waves, said rescue teams were legally obliged to keep searching for the missing people for seven days, beginning last Sunday morning. Soldiers combed the coast, flying drones overhead as torrential rain contributed to tricky driving conditions for ambulances ferrying injured people to local hospitals.”

Top line: “Stock markets staged a miraculous comeback Wednesday following their worst-ever Christmas Eve. The Dow posted its biggest daily point gain ever. The Dow rose 1,086 points, gaining 5%. The S&P 500 also soared 5%, and the Nasdaq was up 5.8%, pulling out of bear market territory. The day marked the biggest percentage gain for all three indices since March 2009.”

Top line: “Wells Fargo will pay $575 million to resolve investigations by all 50 states and Washington, D.C., into a range of practices, the latest chapter in the bank’s long-running legal problems. The deal ends inquiries that began after federal regulators revealed in September 2016 that Wells Fargo employees had for years opened millions of unauthorized bank accounts in customers’ names. The employees said they had done so because they feared losing their jobs if they could not meet Wells Fargo’s aggressive sales goals. The disclosure led to the departure of Wells Fargo’s chief executive at the time, John G. Stumpf, and several other senior executives. It also sullied the company’s prized image as the best-behaved major American bank after the 2008 financial crisis.”

7. Retail is having its best holiday season in 6 years – CNBC, Lauren Thomas

Top line: “Retail is having its best holiday shopping season in six years, according to early data tracking consumers’ purchases. Sales in the U.S. from Nov. 1 through Christmas Eve were up 5.1 percent to more than $850 billion, according to Mastercard SpendingPulse, which monitors spending both in stores and online via all forms of payment. Mastercard also said online sales during that time frame were up 19.1 percent from a year ago, in line with earlier reports that showed robust growth in e-commerce this holiday season.”

Top line: “The Syrian army deployed forces near Manbij in northern Syria on Friday, a war monitor and a U.S. official said, after the Kurdish YPG militia urged Damascus to protect the town, where U.S. forces operate, from the threat of a Turkish offensive. Manbij, which U.S.-backed forces captured from Islamic State in 2016, has emerged as a focal point of new tensions after U.S. President Donald Trump’s decision to withdraw U.S. forces whose presence has effectively deterred Turkey. After a Syrian army announcement declaring government troops had entered Manbij, Turkey-backed Syrian rebels stationed in nearby territory said they had begun moving together with Turkish forces toward the town in readiness for “the start of military operations to liberate” it.”

Top line: “In another proposed reversal of an Obama-era standard, the Environmental Protection Agency Friday said limiting mercury and other toxic emissions from coal and oil fired power plants is not cost-effective, and should not be considered ‘appropriate and necessary.’ The EPA says it’s keeping the 2012 restrictions in place for now, in large part because utilities have already spent billions to comply with them. But environmental groups worry the move is a step toward repealing the limits, and could make it harder to impose other regulations in the future.”

Top line: “After meeting nearly a decade ago, Miley Cyrus and Liam Hemsworth are officially wed. Days after their rumored wedding on Sunday night, the singer, 26, posted two sweet photos from the intimate ceremony on Wednesday to her social media accounts. In one snap, Cyrus and Hemsworth, 28, are all dressed up in their wedding best — a floor-length white gown for her and black tux for him — as they share a smooch. And in two other photos, the actor has his arms wrapped around Cyrus’ waist as they share a quiet moment together in front of what appears to be an altar adorned with roses and baby’s breath.”