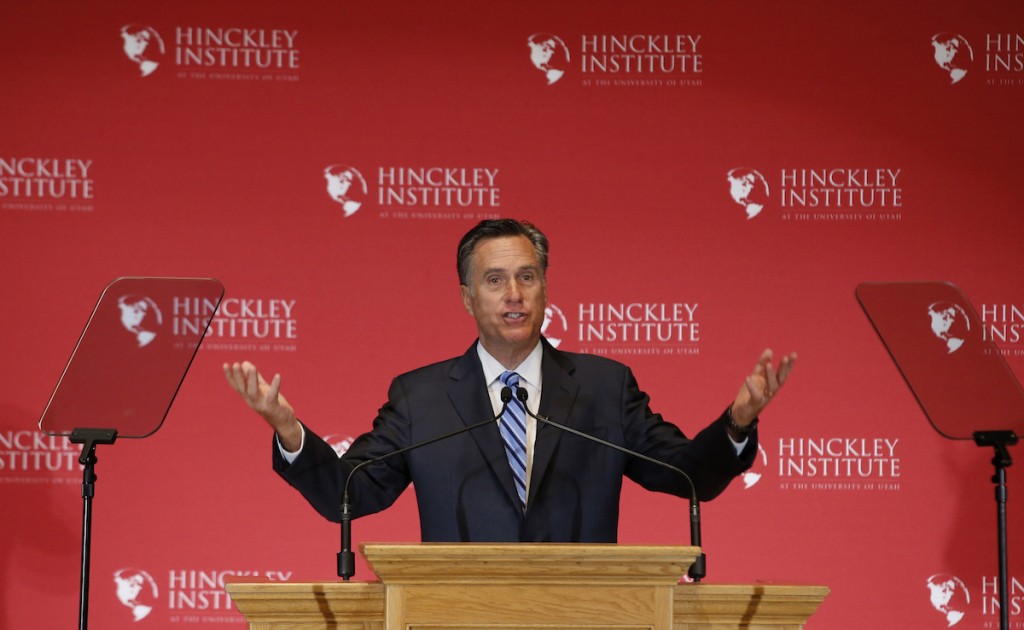 Mitt Romney gives a speech on the state of the Republican party at the Hinckley Institute of Politics on the campus of the University of Utah on March 3, 2016 in Salt Lake City, Utah. (Photo by George Frey/Getty Images)

The 2016 election occupied most of the headlines this week between Super Tuesday, the contentious Republican debate, Mitt Romney‘s speech against Donald Trump and on his vision for the future of the GOP and the immunity granted to the Hillary Clinton staffer who set up her email server. Catch up on the biggest political and non-political stories of the week, including the ongoing tensions with North Korea and potentially new evidence in the O.J. Simpson case, as they appeared in this week’s Daily Edition.

Top line: “Trump swamped his rivals by piling up seven wins across the nation, demonstrating broad appeal for his anti-establishment movement. Clinton also had a strong night, winning seven states and showing her strength with minorities in the South…Trump won across the conservative South in Alabama, Arkansas, Georgia, Tennessee and Virginia, but also captured more moderate Massachusetts and Vermont.”

Top line: “The U.N. Security Council unanimously adopted harsh sanctions Wednesday against North Korea, imposing some of the strongest measures ever used to pressure Pyongyang to abandon its nuclear weapons program…It mandates cargo inspections for all goods going in and out of North Korea by land, sea or air, chokes off supplies of most aviation fuel for its armed forces, and bans the sale of all small arms and conventional weapons to Pyongyang. It also prohibits transactions that raise hard cash for North Korea through sales of its natural resources.”

Top line: “North Korean leader Kim Jong Un ordered his military on standby for nuclear strikes at any time, state media reported Friday, an escalation in rhetoric targeting rivals Seoul and Washington that may not yet reflect the country’s actual nuclear capacity…In a show of anger over the recent adoption of harsh U.N. sanctions over its recent nuclear test and long-range rocket launch, the North fired off short-range projectiles into the sea Thursday.”

Top line: “Senators Marco Rubio and Ted Cruz, fighting for their political lives, relentlessly demeaned and baited Donald J. Trump at Thursday’s debate, all but pleading with Republicans to abandon a candidate with a long history of business failures, deep ties to the Democratic Party and a taste for personal insults.

Warning that Mr. Trump would lead the party to a historic defeat in November, Mr. Rubio and Mr. Cruz delivered their attacks with urgency, as if trying to awaken voters who had fallen under Mr. Trump’s spell. Mr. Rubio derided Mr. Trump as untrustworthy and uncivil, while Mr. Cruz bashed him for donating money to Hillary Clinton’s 2008 presidential campaign and to other Democrats. Mr. Trump looked on with disgust, but as in their 10 previous debates, he seemed impervious and perhaps unstoppable.”

Top line: “In an extraordinary display of Republican chaos, the party’s most recent presidential nominees, Mitt Romney and John McCain, lambasted current front-runner Donald Trump on Thursday, calling him unfit for office and a danger for the nation and the GOP.

‘His is not the temperament of a stable, thoughtful leader,’ Romney declared. He called Trump ‘a phony’ who is ‘playing the American public for suckers,’ a man whose ‘imagination must not be married to real power.'”

Top line: “Nearly 22 years after the fatal stabbing of Nicole Brown Simpson, reports of a knife discovered on her ex-husband’s property are sparking a frenzy of questions. And authorities are wondering why a former police officer, who kept the knife for years, did not turn it in sooner. O.J. Simpson was acquitted in the June 1994 killings of his ex-wife and her friend, Ronald Goldman, outside her condominium in Los Angeles.”

Top line: “The metal fragment, which could be part of the missing Malaysia Airline’s Boeing 777’s horizontal stabilizer, was found in a sandbank off Mozambique by Seattle lawyer Blaine Gibson and first reported by NBC News. Early photographic analysis of the object suggests it could have come from the jetliner, but officials say they have no evidence so far about any links to the investigation.”

8. After 340 days in space, astronaut Scott Kelly back on Earth—USA Today, Trevor Hughes

Top line: “Kelly, who landed on the steppes of Kazakhstan late Tuesday, has spent more consecutive time in space — 340 days — than any other American. His most recent stint was aboard the International Space Station, where he’s lived since March 27. In all, the astronaut has now spent a total of 520 days in orbit across four missions.”

Top line: “U.S. Magistrate Judge James Orenstein of the Eastern District of New York denied the government’s request to compel Apple to assist law enforcement in extracting encrypted information from a suspect’s iPhone in a drug-related case. As in the San Bernardino case, the federal government invoked the All Writs Act of 1789 (AWA) in New York — asking the court to force Apple to help federal law enforcement pull information from a locked iPhone.”

Top line: “The Justice Department has granted immunity to a former State Department staffer, who worked on Hillary Clinton’s private email server, as part of a criminal investigation into the possible mishandling of classified information, according to a senior law enforcement official. The official said the FBI had secured the cooperation of Bryan Pagliano, who worked on Clinton’s 2008 presidential campaign before setting up the server in her New York home in 2009.”