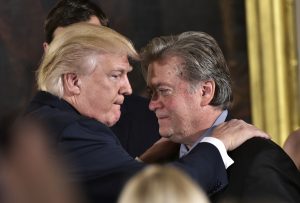 US President Donald Trump (L) congratulates Senior Counselor to the President Stephen Bannon during the swearing-in of senior staff in the East Room of the White House on January 22, 2017 in Washington, DC. MANDEL NGAN/AFP/Getty Images

The first week of the new year was dominated by President Trump as he clashed with former White House chief strategist Steve Bannon, lashed out at Michael Wolff, author of the controversial new book “Fire and Fury” and struggled with the Russia investigation.

The U.S. Northeast was also battered by icy winds and brutal cold as temperatures dipped to record lows.

Elsewhere in the world, there were widespread protests in Iran, North and South Korea agreed to hold talks and Pakistan defended its anti-terrorism record after the U.S. cut aid to the country. 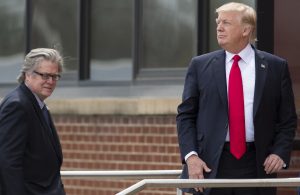 Top line: “Former White House chief strategist Stephen K. Bannon’s hopes of leading a revolt in the Republican Party this year suffered a severe blow Thursday as his allies rebuked and abandoned him following a nasty public break with President Trump. Candidates who once embraced Bannon distanced themselves from his efforts, groups aligned with his views sought separation, and his most important financial backer, the billionaire Mercer family, which has championed him for years, announced that it was severing ties. Even his position as chairman of Breitbart News, a website he has referred to as one of his most effective “weapons,” was being reviewed by the company’s leadership, according to people familiar with the talks — a move that White House press secretary Sarah Huckabee Sanders publicly encouraged at Thursday’s White House news briefing.”

Top line: “Sex, lies, tears, fears — and lots of profanity. All of that and more is in Michael Wolff’s new book, “Fire and Fury: Inside the Trump White House,” to be published Tuesday by Henry Holt. It features riveting behind-the-scenes anecdotes from Trump’s White House, including juicy details on how the most powerful men and women in Washington worked together to make Trump president — and turned on one another after he took the oath of office.”

Top line: “President Trump gave firm instructions in March to the White House’s top lawyer: stop the attorney general, Jeff Sessions, from recusing himself in the Justice Department’s investigation into whether Mr. Trump’s associates had helped a Russian campaign to disrupt the 2016 election. Public pressure was building for Mr. Sessions, who had been a senior member of the Trump campaign, to step aside. But the White House counsel, Donald F. McGahn II, carried out the president’s orders and lobbied Mr. Sessions to remain in charge of the inquiry, according to two people with knowledge of the episode. Mr. McGahn was unsuccessful, and the president erupted in anger in front of numerous White House officials, saying he needed his attorney general to protect him. Mr. Trump said he had expected his top law enforcement official to safeguard him the way he believed Robert F. Kennedy, as attorney general, had done for his brother John F. Kennedy and Eric H. Holder Jr. had for Barack Obama. Mr. Trump then asked, “Where’s my Roy Cohn?” He was referring to his former personal lawyer and fixer, who had been Senator Joseph R. McCarthy’s top aide during the investigations into communist activity in the 1950s and died in 1986.” 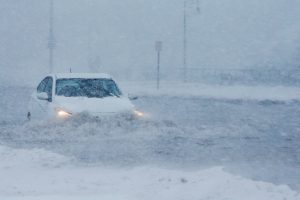 Drivers make their way along the flooded Beach Road after the ocean overtopped the seawall during a winter snowstorm in the Boston suburb of Lynn, Massachusetts, U.S., January 4, 2018. REUTERS/Brian Snyder

Top line: “A wild, winter storm along the East Coast finally moved on, but the brutal cold is only getting worse, with a new surge of bitter arctic air set to drive temperatures 20 to 30 degrees below average from the Great Lakes to most of the Northeast. The National Weather Service said highs Saturday will be in the single digits across the lower Great Lakes down into Ohio, and coastal New England, and readings in the teens likely from Washington, D.C., to New York City. Worse, temps are expected to plunge overnight to zero over most of New England, and perhaps even down to 5 to 10 degrees in North Carolina.” 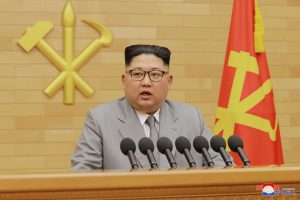 5. North Korea agreed to diplomatic talks with South Korea for the first time in over 2 years – Vox.com, Alex Ward

Top line: “North Korea and South Korea will hold high-level diplomatic talks next week — the first time the two countries will officially speak to each other in more than two years. It’s yet another sign that North Korea’s leader Kim Jong Un is looking for ways to calm tensions ahead of the 2018 Winter Olympics in South Korea next month. For most of last year, it looked like the United States and North Korea were careening toward a potentially catastrophic war, a conflict that would’ve also involved South Korea. It’s possible that the North is using these talks as a way to avoid that outcome.“The agenda is on matters regarding Pyeongchang Olympic games as well as issues concerning improving inter-Korean ties,” Baek Tae-hyun, a spokesperson for South Korea’s Ministry of Unification, told reporters on January 5. The talks will take place in the Demilitarized Zone — the inter-Korean border — on January 9, and will be the first time each side has formally spoken to the other since December 2015.” 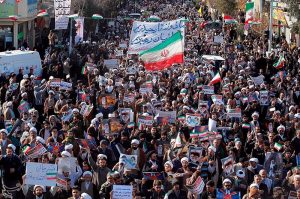 Top line: “Thousands of government supporters staged rallies in Iran for a fourth day on Saturday, in a backlash against widespread protests that the clerical establishment has blamed on the country’s enemies. Saturday’s show of support came a day after Iran’s foreign minister said a United Nations Security Council meeting called by the United States to discuss the protests had proved a “blunder” by the administration of U.S. President Donald Trump. State television showed rallies in cities including Amol, Semnan and Shadegan waving Iranian flags and chanting “Death to America”, “Death to Israel” and “Death to Britain”. More than a week of unrest has seen 22 people die and more than 1,000 arrested, according to Iranian officials, in the biggest anti-government protests for nearly a decade. Unrest spread to more than 80 cities and rural towns as thousands of young and working class Iranians voiced anger at graft, unemployment and a deepening gap between rich and poor.”

Top line: “Pakistan reacted defensively on Friday to an announcement that the White House would suspend most security assistance to its military. The suspension of hundreds of millions of dollars of aid is meant to pressure Pakistan into taking action against militant groups. It followed days of tensions that began with a New Year’s Day tweet by President Trump accusing Pakistan of “deceit” for taking billions of dollars in aid while sheltering terrorists the U.S. is fighting in Afghanistan. The U.S. accuses Pakistan of harboring terrorists from the Haqqani network, a charge Islamabad denies, and of maintaining relations with the Afghan Taliban. Still, Pakistani officials appeared to tone down the initial emotional reaction. “We are in difficult times,” Mohammad Faisal, Pakistan’s foreign ministry spokesman, tells NPR. “Efforts are still underway to find common ground and identify steps that can be taken jointly.”’

Top line: “Music streaming giant Spotify confidentially filed IPO documents with the SEC at the end of December, Axios has learned from multiple sources. Spotify is pursuing a direct listing instead of a traditional float, causing both Silicon Valley and Wall Street to pay very close attention. If successful, it could change how some tech companies go public. The direct listing means no road show or other typical IPO accoutrements — including some of the Wall Street fees, although several investments banks are involved. The quiet period does seem intact, however, as a Spotify spox declined comment.”

Top line: “Apple Inc. said all Mac computers and iOS devices, like iPhones and iPads, are affected by chip security flaws unearthed this week, but the company stressed there are no known exploits impacting users. The Cupertino, California-based company said recent software updates for iPads, iPhones, iPod touches, Mac desktops and laptops, and the Apple TV set-top-box mitigate one of the vulnerabilities known as Meltdown. The Apple Watch, which runs a derivative of the iPhone’s operating system is not affected, according to the company. Despite concern that fixes may slow down devices, Apple said its steps to address the Meltdown issue haven’t dented performance. The company will release an update to its Safari web browser in coming days to defend against another form of the security flaw known as Spectre. These steps could slow the speed of the browser by less than 2.5 percent, Apple said in a statement posted on its website.”

Top line: “The buzz kill long dreaded in the marijuana industry came just days after California opened what is expected to be the world’s largest legal pot market. The Trump administration announced Thursday that it was ending an Obama-era policy to tread lightly on enforcing U.S. marijuana laws. The declaration renewed anxiety, confusion and uncertainty that has long shadowed the bright green leafy drug still forbidden under federal law but now legal in a majority of states as medicine and in a handful of those for recreational purposes.”