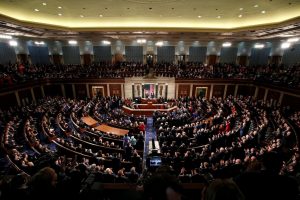 President Trump delivers his State of the Union address to a joint session of Congress. REUTERS/Joshua Roberts

President Donald Trump delivered his first State of the Union address this week, which focused primarily on immigration, infrastructure, national security, trade, jobs and the economy.

Joseph P. Kennedy III responded on behalf of the Democrats, criticizing the Trump administration for not “just targeting the laws that protect us,” but “targeting the very idea that we are all worthy of protection.”

Also this week, The White House approved the release of a controversial memo that alleges surveillance abuses by the FBI during Trump’s 2016 presidential campaign and bias in the Russia probe.

Plus, a ‘super blue blood moon’ eclipse awed millions around the world and Caroline Wozniacki and Roger Federer won the Australian Open. 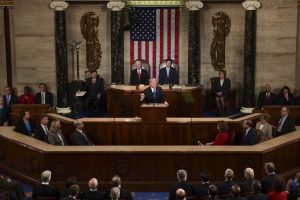 President Trump delivers his State of the Union address to a joint session of Congress on Capitol Hill. AP Photo/Susan Walsh

Top line: “President Trump, whose first year in office saw near-constant turmoil and division, claimed Tuesday that he has ushered in an ebullient “new American moment” and issued a summons for “the unity we need to deliver for the people we were elected to serve.” “Over the last year, we have made incredible progress and achieved extraordinary success,” Trump said. “. . . Through it all, we have seen the beauty of America’s soul and the steel in America’s spine.” The president set an ambitious agenda for his second year in office, from a $1.5 trillion plan to rebuild the nation’s crumbling infrastructure to a four-pronged immigration package to a pledge to reduce prescription drug prices. His one-hour, 20-minute speech was the longest since Bill Clinton’s State of the Union address in 2000.”

Top line: “Without uttering the president’s name, Representative Joseph P. Kennedy III chastised the Trump administration Tuesday night for what he said was its abandonment of the fundamental values for which the nation stands. “Their record is a rebuke of our highest American ideal: the belief that we are all worthy, we are all equal and we all count,” Mr. Kennedy said as he delivered the official Democratic Party response to Mr. Trump’s State of the Union address. Stating that “hatred and supremacy” are “proudly marching in our streets,” Russia is “knee-deep in our democracy,” and the Justice Department is “rolling back civil rights by the day,” Mr. Kennedy said that the administration “isn’t just targeting the laws that protect us — they are targeting the very idea that we are all worthy of protection.”’ 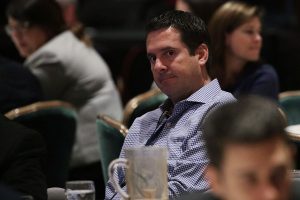 Top line: “President Trump joined his Republican allies on Friday in piling on with attacks about “bias” in the FBI and the Justice Department as Washington, D.C., waited on tenterhooks for the release of a controversial secret spying memo. The White House said Trump reviewed the memo and approved its full declassification. The House Intelligence Committee then posted it online. Trump said the memo confirmed bad conduct by his enemies inside the federal law enforcement world. “I think it’s terrible. It’s a disgrace what’s going on in this country,” Trump told reporters. “When you look at that, and you see that, a lot of people should be ashamed of themselves and much worse than that.” The FBI and Justice Department both are led by leaders nominated by Trump and confirmed by Republican majorities in the Senate. But the president and his allies say those same agencies are out to get him.”

Magazine to follow: The Nunes Memo, Explained by Vox 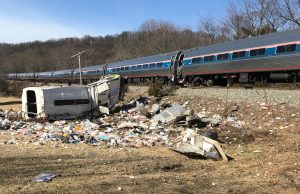 An Amtrak passenger train carrying Republican members of Congress from Washington to a retreat in West Virginia is seen after colliding with a garbage truck in Crozet, January 31, 2018. Justin Ide/Crozet Volunteer Fire Department/Handout via REUTERS

Top line: “A chartered train carrying Republican lawmakers collided with a garbage truck in Virginia on Wednesday morning, killing one person, authorities said. The train was carrying House and Senate Republicans to a retreat in West Virginia when the crash occurred. No members of Congress or their staff were injured, White House Press Secretary Sarah Huckabee Sanders said in a statement. Authorities late Wednesday identified the deceased victim as Christopher Foley, 28, one of two passengers aboard the trash truck. A second unidentified passenger was airlifted to University of Virginia Medical Center with critical injuries, the Abermarle County Police Department said in a statement.”

Top line: “Las Vegas casino mogul Steve Wynn on Saturday stepped down as Republican National Committee finance chairman, according to three senior Republicans briefed on the decision. The decision followed a Friday report in the Wall Street Journal alleging that Wynn engaged in sexual harassment. Wynn, 76, was President Donald Trump’s handpicked choice for the finance position. It has not yet been determined who will replace him. “Today I accepted Steve Wynn’s resignation as Republican National Committee finance chair,” said RNC chair Ronna Romney McDaniel, who spoke about the Wynn situation with the president on Saturday morning, according to a person with knowledge of the conversation.”

Top line: “The director of the Centers for Disease Control has resigned, according to the Department of Health and Human Services, in the wake of her “financial interests” coming under scrutiny. Dr. Brenda Fitzgerald had invested in stock at tobacco companies only a month after assuming her role at a federal agency that claims to be “at the forefront of the nation’s efforts to reduce deaths and prevent chronic diseases that result from tobacco use.” “Dr. Fitzgerald owns certain complex financial interests that have imposed a broad recusal limiting her ability to complete all of her duties as the CDC Director,” said HHS spokesman Matt Lloyd in a statement. “Due to the nature of these financial interests, Dr. Fitzgerald could not divest from them in a definitive time period.”’ 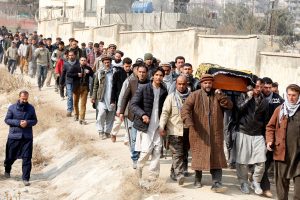 Afghan men carry the coffin of one of the victims of yesterday’s car bomb attack at in Kabul, Afghanistan January 28, 2018. REUTERS/Omar Sobhani

Top line: “More than 100 people are now known to have been killed in a suicide bombing on Saturday in Kabul. Attackers drove an ambulance past a police checkpoint to get to a crowded street in a district full of government buildings and embassies. Afghanistan’s government has declared a day of mourning for Sunday, as funerals take place and relatives search hospitals for survivors. The Taliban – a hardline Islamist group – said it was behind the attack. It was the deadliest attack in Afghanistan for months and took place a week after an attack on a Kabul hotel in which 22 people were killed. Interior minister Wais Barmak said a number of people died in hospital overnight and the death toll now stood at 103, with 235 wounded. Most of the injured are men.” 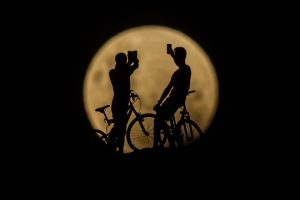 The super blue blood moon in Lancelin, Australia, the first time it has been seen in that part of the world since 1983. A super blue blood moon is the result of three lunar phenomena happening all at once. Not only is it the second full moon in January, but the moon will also be close to its nearest point to Earth on its orbit, and be totally eclipsed by the Earth’s shadow. Paul Kane/Getty Images

Top line: “The moon put on a rare cosmic show Wednesday: a red blue moon, super big and super bright. It’s the first time in 35 years a blue moon has synced up with a supermoon and a total lunar eclipse, or blood moon because of its red hue. Hawaii and Alaska had the best seats, along with the Canadian Yukon, Australia and Asia. The western U.S. also had good viewing, along with Russia.” 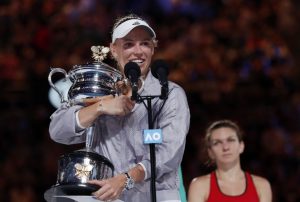 Top line: “ After a fortnight of enthralling and captivating tennis at Melbourne Park, Caroline Wozniacki and Roger Federer emerged as the singles champions for 2018. It was an action-packed two weeks which saw records shattered, controversies erupt, temperatures soar, an emergence of bright young stars and champions old and new.”

Top line: “President Trump’s administration released a list of hundreds of Russian politicians and oligarchs who have “flourished” under President Vladimir Putin. The 114 senior politicians and 96 oligarchs appeared on what is dubbed the “Putin list” following a demand by Congress that the United States punish Russia for interfering in the 2016 U.S. presidential election. The list was delivered late Monday, shortly before midnight, the Congress-imposed deadline.”

~SonaliK is reading Taxes Made Easy by Money