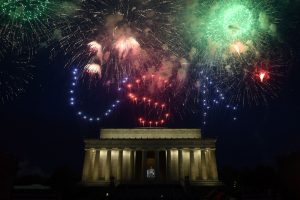 Fireworks explode over the Lincoln Memorial during the Fourth of July celebrations in Washington, DC, July 4, 2019. (Photo by Brendan Smialowski / AFP / Getty Images)

The country celebrated its 243rd birthday on July 4th and in Washington D.C., the festivities expanded from the usual fireworks and concert to include a speech from President Donald Trump, military tanks and weaponry, and a flyover from military planes.

Trump started the week with a last minute trip to the Demilitarized Zone (DMZ) between the two Koreas, where he became the first sitting U.S. president to step across into North Korea. Spoking with leader Kim Jong Un, Trump announced the restart of negotiations over sanctions and denuclearization. However, Kim later condemned the U.S. as “hell-bent on hostile acts” for co-signing a letter with European nations that accused North Korea of violating oil import limits.

Trump also clashed with his own administration and the U.S. Supreme Court over his effort to add a citizenship question to the 2020 census, as well as with House Democrats who sued the Treasury Department and IRS for access to his tax returns, and with Iran, whose leaders vowed to increase their enriched uranium stockpiles.

In sports, U.S. female athletes dominated in both the Women’s World Cup, where they qualified for the finals, and at Wimbledon, where 15-year-old Cori Gauff triumphed over superstar Venus Williams and several other veterans to continue competing.

Abroad, unrest in Hong Kong continued as some protesters were arrested after breaking into the legislature building, and the European Union nominated candidates for top roles.

Top line: “In a made-for-television Independence Day production starring America’s military weaponry, President Trump on Thursday used the Lincoln Memorial as the backdrop for a tribute to the country’s armed forces and a call for unity that has been largely absent during his divisive presidency. Flanked by Bradley armored vehicles and M1A2 tanks in front of the statue of Abraham Lincoln, Mr. Trump paid homage to the five branches of the military as a chorus sang each service hymn and he cued the arrival of fighter jets, helicopters and other military aircraft as they roared overhead. Speaking to a rain-soaked audience filled with troops decked out in “Make America Great Again” and “Trump 2020” paraphernalia, the president finally presided over the grand military display that he has wanted since witnessing the Bastille Day parade in Paris two years ago. Even before he spoke, the president’s appearance on the National Mall drew fierce criticism from Democrats and some members of the military, who accused the president of using the military troops and equipment for his own political purposes.” 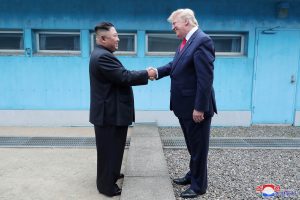 Top line: “North Korea’s mission to the United Nations accused the United States on Wednesday of being “more and more hell-bent on hostile acts” against Pyongyang, despite President Donald Trump wanting talks between the two countries. In a statement the mission said it was responding to a U.S. accusation that Pyongyang breached a cap on refined petroleum imports and a letter that it said was sent on June 29 by the United States, France, Germany and Britain to all U.N. member states urging them to implement sanctions against North Korea. Trump became the first sitting U.S. president to set foot in North Korea on Sunday when he met leader Kim Jong Un in the Demilitarized Zone (DMZ) between the two Koreas. The pair agreed to resume stalled talks aimed at getting Pyongyang to give up its nuclear weapons program.”

Top line: “President Donald Trump said he may issue an executive order to add a question on citizenship to the 2020 census as the administration considers alternatives after the Supreme Court put the matter on hold. But by midday Friday, the Justice Department hadn’t decided how — or even whether — to move ahead, according to a filing submitted to meet a deadline set by a Maryland judge. The five-page document said the court would be notified “in the event” the U.S. adopts a new rationale for adding the question, while suggesting the government is still searching for a path forward.” Trump said Thursday that government officials are working through the July 4 holiday in search of a way to insert the citizenship question on the census despite a June 27 Supreme Court ruling that put the administration’s initial plan on hold. The forms for the once-a-decade headcount must be prepared soon to meet the deadline for 2020.”

4. Trump warns Iran nuclear threats will ‘come back to bite you’ – The Guardian

Top line: “Donald Trump has warned Iran to be “careful with threats” as they can “come back to bite you” in response to Tehran’s vow that it will exceed within days its uranium enrichment level agreed under the 2015 nuclear deal. President Hassan Rouhani reiterated on Wednesday’s that his country would exceed the enrichment level set out under the agreement in response to failure by other parties to the deal to keep up their promises and provide Iran relief from the US sanctions. “On July 7, our enrichment level will no longer be 3.67%. We will put aside this commitment. We will increase (the enrichment level) beyond 3.67% to as much as we want, as much as is necessary, as much as we need,” Rouhani told a cabinet meeting. The enrichment maximum set in the agreement is sufficient for commercial power generation but far below the more than 90% level required for a nuclear warhead.” 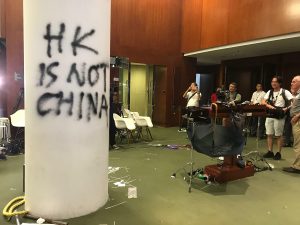 Damage to the Legislative Council following a break-in by protesters is seen during a media tour, Wednesday, July 3, 2019, in Hong Kong. (AP Photo/Johnson Lai)

Top line: “Police said they had arrested 13 people after the protests on Monday’s anniversary of Hong Kong’s return to China, including one man accused of storming the legislature building in a break-in involving hundreds of pro-democracy protesters who vandalized offices and the main chamber. The local man surnamed Poon was arrested in Mong Kok and accused of assaulting police, criminal destruction, misconduct in public places and forced entry of the Legislative Council Complex, police said late Wednesday night. Eleven men and a woman were arrested in connection with a different protest that took place Monday morning. They face various charges including possession of offensive weapons, unlawful assembly, assaulting a police officer, obstructing a police officer and failing to carry an identity document. The brief statement did not describe the offensive weapons or provide further details.”

Top line: “Acting Department of Homeland Secretary Kevin McAleenan has ordered an immediate investigation into offensive posts “that allegedly includes active Border Patrol personnel,” he said in a series of tweets Wednesday. Earlier this week, a report revealed a closed Facebook group for current and former Border Patrol agents that reportedly features jokes about migrant deaths, derogatory comments about Latina lawmakers and a lewd meme involving at least one of them.”

Top line: “House Democrats on Tuesday sued for President Trump’s tax returns, marking the beginning of a high-stakes legal fight over his efforts to keep his taxes secret. Ways and Means Chairman Richard Neal (D-Mass.) filed suit in federal court to enforce a subpoena for the records rejected in May by the administration. Democrats are seeking six years’ worth of Trump’s returns under a 1924 law allowing the leaders of Congress’ tax committees to examine anyone’s confidential tax information. Democrats hope the documents will answer a host of questions about Trump’s finances. Trump has defied a decades-old tradition of presidents voluntarily releasing their returns, and his administration is fighting the effort to force his hand, arguing Democrats do not have a legitimate reason for seeking the information.”

Top line: “Cori “Coco” Gauff’s remarkable Wimbledon run isn’t over. The 15-year-old American pulled off another huge upset Friday, this one in a third-round thriller that saw her come back to beat Slovenian Polona Hercog 3-6, 7-6, 7-5. After taking down Venus Williams in the first round and Magdalena Rybarikova in the second round — both in straight sets — Gauff had her back against the wall after losing the first set and trailing Hercog 5-2 in the second set. But that’s when the teenager dug down and found another gear. Gauff rallied to force a tiebreak, which she won 9-7, and fed off the crowd at the All England Club to win the decisive third set. Gauff advances to the fourth round to face No. 7-seeded Simona Halep on Monday.” 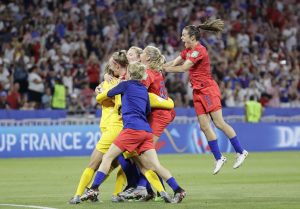 The U.S. celebrates at the end of the Women’s World Cup semifinal soccer match against England. (AP Photo/Alessandra Tarantino)

Top line: “Alex Morgan celebrated her 30th birthday Tuesday by scoring a decisive goal and goalkeeper Alyssa Naeher stopped a late penalty kick in the United States’ 2-1 victory over England in the Women’s World Cup semifinal in Lyon, France. The American win sends them to Sunday’s championship match, also in Lyon, against the winner of Wednesday’s other semifinal match between the Netherlands and Sweden. The United States barely held on, as Naeher made the save of the tournament by stopping England’s captain Stephanie Houghton on a spot kick in the 84th minute.”

Top line: “European leaders on Tuesday proposed awarding the powerful presidency of the European Commission to German Defense Minister Ursula von der Leyen, putting a forceful advocate of transatlantic ties into the job at a time of international uncertainty. The European Parliament needs to give final approval — not a sure bet — but, if confirmed, von der Leyen, an ally of German Chancellor Angela Merkel, would be the first woman to fill the European Union’s top post. European leaders also nominated International Monetary Fund Director Christine Lagarde to helm the European Central Bank, a decision that would give that institution, too, its first female head. Belgian Prime Minister Charles Michel was tapped as the next president of the European Council. And Spanish Foreign Minister Josep Borrell would be charged with supervising the struggling Iran nuclear agreement as the E.U.’s foreign policy chief.”