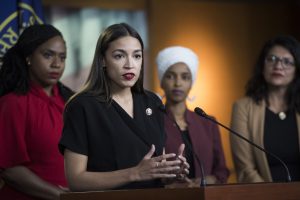 President Donald Trump started and ended the week by verbally attacking four Democratic congresswomen of ethnic and religious minority backgrounds, telling them to “go back” to other countries and inspiring supporters to chant “send her back.”

On the topic of immigration, the Trump administration is also proposing to rewrite asylum law and create a new citizenship test.

The U.S. House of Representatives also held multiple votes, including to reject an impeachment bill against the president, to hold Attorney General William Barr and Commerce Secretary Wilbur Ross in contempt, to raise the federal minimum wage to $15 per hour, to repeal the “Cadillac tax” provision of the Affordable Care Act, to restrict weapon sales to Saudi Arabia and the United Arab Emirates, and to add more restrictions on revealing the identities of U.S. spies.

Elsewhere in the world, protests continued in Puerto Rico against the governor after leaked texts revealed homophobic and misogynistic messages, an Ebola outbreak in the Democratic Republic of Congo has been declared a global health emergency by the World Health Organization, and an arson fire killed dozens of people in Japan’s Kyoto Animation studio.

American icons were celebrated, with the country mourning the death of retired Supreme Court Justice John Paul Stevens at the age of 99 and marking the 50th anniversary of the Apollo 11 moon landing by Neil Armstrong, Buzz Aldrin and Michael Collins.

Top line: “President Trump capped his week of attacks on four minority congresswomen on Friday, saying that while he’s president any criticism of the United States is unacceptable and they “can’t get away with” it. His statement is at odds with the Constitution, which grants every American the right of free speech. They “can’t get away with” speaking badly about the United States, Trump told reporters outside the White House. “I can tell you this, you can’t talk that way about our country, not when I’m the president.” The four Democratic lawmakers have criticized Trump administration policies, most notably on immigration and climate change. Trump, in the past, has criticized the policies of Democratic presidents.”

Top line: “The House was busy on Wednesday, considering a range of divisive issues. Here’s a roundup of what the chamber voted on: Impeaching the president, Contempt citations for William Barr and Wilbur Ross, Health insurance tax, Weapons sales to Saudi Arabia and the United Arab Emirates, Intelligence policy.

Top line: “Iran seized two oil tankers – one registered in the UK, the other in Liberia – in the strait of Hormuz on Friday, marking a dramatic escalation in the worsening standoff in the Gulf. Iran’s Revolutionary Guard claimed to have taken the British-flagged Stena Impero into port, and Iranian officials claimed it had drifted out of shipping lane and turned its satellite locator off. A second tanker, the Mesdar, which is Liberian-flagged but owned and operated by Glasgow-based firm Norbulk, also made a sudden diversion from its course towards the Saudi port of Ras Tanura on Friday, and tracking data showed it moving northwards towards the Iranian coast before apparently turning off its tracking signal. Less than two hours later, the Mesdar’s tracking signal was turned back on.”

Top line: “Reversing decades of U.S. policy, the Trump administration said Monday it will end all asylum protections for most migrants who arrive at the U.S.-Mexico border — the president’s most forceful attempt yet to block asylum claims and slash the number of people seeking refuge in America. The new rule would cover countless would-be refugees, many of them fleeing violence and poverty in Central America. It is certain to face legal challenges. According to the plan published in the Federal Register , migrants who pass through another country — in this case, Mexico — on their way to the U.S. will be ineligible for asylum. The rule also applies to children who have crossed the border alone.” 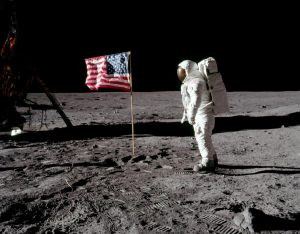 Astronaut Buzz Aldrin, Lunar Module pilot for Apollo 11, during a walk on the moon, July 20, 1969. (Neil Armstrong/NASA via Reuters)

Top line: “The first human steps were taken on the moon 50 years ago to the day on Saturday, and eight astronauts from NASA’s Apollo program — including Buzz Aldrin — have been celebrating in the months and weeks leading up to the landmark day. The group met up in March at the Explorer’s Club in New York City, according to Business Insider. Of the 17 Apollo astronauts still alive, Walter Cunningham of Apollo 7, Rusty Schweickart of Apollo 8, Fred Haise of Apollo 13, Al Worden of Apollo 15, Charlie Duke of Apollo 16, Harrison Schmitt of Apollo 17, Michael Collins and Aldrin, 89, both of Apollo 11, were present at the celebratory event. Aldrin — the second man to walk on the moon after Neil Armstrong, who died in 2012 at age 82 — certainly stood out at the event, sporting a suit covered in rocket ships, a silver bowtie, pink button down and American flag socks. But the event wasn’t just about space-worthy threads — several of the astronauts participated in a panel, sharing stories from their various missions.” 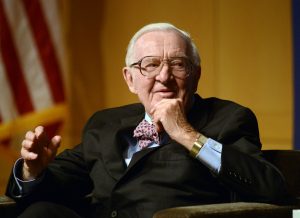 Top line: “Retired Supreme Court Justice John Paul Stevens, who was appointed by President Gerald Ford in 1975 as a moderate but later became a leading liberal voice, has died, the Supreme Court said Tuesday. He was 99. The cause of death was complications from a stroke he suffered on Monday, the Supreme Court said.  His daughters were by his side at the time of his death. “He brought to our bench an inimitable blend of kindness, humility, wisdom, and independence. His unrelenting commitment to justice has left us a better nation,” said Chief Justice John Roberts in a statement. Stevens served on the Supreme Court until he retired at the age of 90 in 2010. Upon his retirement, former President Obama praised him as an “impartial guardian of the law” who served the nation with “honor and humility.””

Top line: “Protesters calling for the resignation of Gov. Ricardo Rosselló began clearing the streets in the early morning hours of Thursday, after a night of heated demonstrations that culminated in demonstrators overturning barricades and police firing tear gas into the crowd. “We are tired of the abuse, of so many years of corruption,” a protester, Leishka Flores, told CNN. “We are here to make a revolution.” A series of protests began days ago when nearly 900 pages of leaked chats from a governor’s private Telegram Messenger group, obtained by Puerto Rico’s Center for Investigative Journalism, were published over the weekend. “He needs to know that no one in Puerto Rico wants him,” another protester told the crowd.”

Top line: “The World Health Organization has declared the Ebola crisis in the Democratic Republic of Congo a “public health emergency of international concern”. The move may encourage wealthy donor countries to provide more cash. But the WHO stopped short of saying borders should be closed, saying the risk of the disease spreading outside the region was not high. The outbreak in DR Congo has killed more than 1,600 people. This week, the first case was detected in Goma, home to more than a million. The PHEIC emergency provision is the highest level of alarm the WHO can sound and has only been used four times previously. This includes the Ebola epidemic that devastated parts of West Africa from 2014 to 2016, and killed more than 11,000 people.” 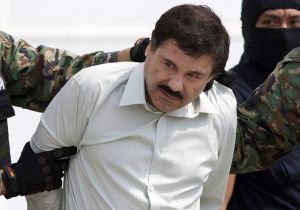 In this Feb. 22, 2014 file photo, Joaquin “El Chapo” Guzman, the head of Mexico’s Sinaloa Cartel, is escorted to a helicopter in Mexico City following his capture in the beach resort town of Mazatlan. Federal prosecutors want to recover $12.6 billion in drug money they say was generated by the Mexican drug lord. The U.S. Attorney’s Office in Brooklyn asked a judge Friday, July 5, 2019, to order Guzman to forfeit that sum. They called the amount a “conservative” estimate of the cash Guzman’s Sinaloa Cartel earned distributing drugs in the United States. Guzman was convicted in February of murder conspiracy and drug trafficking. (AP Photo/Eduardo Verdugo, File)

Top line: “Joaquín Guzmán Loera, the crime kingpin known as “El Chapo” who controlled much of the illegal drug trade across the Western Hemisphere for almost three decades, was sentenced in a federal courtroom in New York on Wednesday to life in prison plus 30 years. Before he was sentenced, Guzmán, 62, told a federal judge that his case was “stained” by juror misconduct. He said the judge denied him a fair trial on drug trafficking charges “when the whole world was watching.” Guzmán — whose nickname refers to his height; it roughly translates as “Shorty” — was responsible for shipping more than 200 tons of cocaine to the United States alone as head of Mexico’s Sinaloa cartel, as well as brutal murders and widespread political payoffs, prosecutors said during his three-month trial in U.S. District Court in Brooklyn, where he was convicted in February.”

Top line: “The Justice Department will not bring federal charges against a New York City police officer over the death of Eric Garner during a chaotic arrest that ignited nationwide protests five years ago. The decision, announced Tuesday by Brooklyn U.S. Attorney Richard Donoghue, marks the end of a civil rights investigation into an episode – much of it captured on video – that helped turn a national spotlight on how police officers use force. Authorities spent years investigating Garner’s death in an examination that proved contentious both inside and outside the Justice Department. Attorneys in the department’s Civil Rights Division long advocated for bringing a criminal charge, while prosecutors in Brooklyn recommended against it. Donoghue said Attorney General William Barr broke the logjam, deciding in recent days that Justice would not bring a federal civil rights prosecution against officer Daniel Pantaleo.”