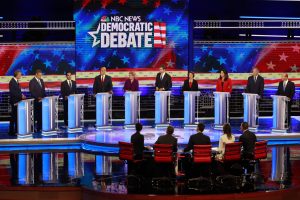 The first round of Democratic Party presidential debates took place this week over two nights, showcasing the surprising and not-so-surprising strengths, weaknesses, policies and personalities of the top 20 candidates for 2020.

The Supreme Court made several major rulings on their last day of the 2018-2019 session: they decided to stay out of partisan gerrymandering cases; they temporarily blocked President Donald Trump’s effort to add a citizenship question to the 2020 census; and they ruled that law enforcement don’t need a warrant to get blood from unconscious DUI suspects.

SCOTUS also agreed to hear arguments for and against Trump’s attempt to end the DACA program, which provides renewable work permits for undocumented immigrants who arrived in the U.S. as children.

The U.S.-Mexico border remained a hot topic elsewhere in Washington, as well. Amidst reports of thousands of children living in unsanitary conditions, Congress passed a $4.6 billion emergency migrant aid bill and the acting commissioner of U.S. Customs and Border Protection John Sanders resigned.

In tech news, Apple’s long-time chief design officer Jony Ive announced his departure, Twitter said they would label tweets from politicians who violate their rules, and Reddit put a pro-Trump channel under “quarantine.”

Top line: “The first Democratic presidential debates of the 2020 cycle are now behind us. Multiple candidates broke into Spanish. White House hopefuls offered up anecdotes about union dads and dished out folksy aphorisms like “all foam and no beer” to show their pragmatism and relatability. And all of them were relentless as they lit into President Trump with charges that he has been derelict on health care, immigration, women’s reproductive rights and other issues. But after hearing from 20 candidates over four hours and two nights, what exactly did voters learn? Here are a few of our takeaways. 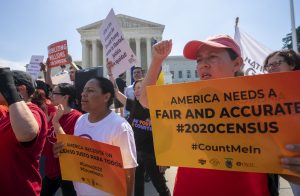 Demonstrators gather at the Supreme Court as the justices finish the term with key decisions on gerrymandering and a census case involving an attempt by the Trump administration to ask everyone about their citizenship status in the 2020 census, on Capitol Hill in Washington, Thursday, June 27, 2019. (AP Photo/J. Scott Applewhite)

Top line: “In a pair of decisions with vast implications for the American political landscape, the Supreme Court on Thursday delivered a victory to Republicans by ruling that federal courts are powerless to hear challenges to extreme partisan gerrymandering but gave a reprieve to Democrats by delaying the Trump administration’s efforts to add a question on citizenship to the 2020 census. The key parts of both decisions were decided by 5-to-4 votes.”

Top line: “Apple’s chief design officer Jony Ive is leaving the company later this year to form an independent design firm. And Apple will be one of his first primary clients. While Ive is striking out on his own in a way, he will continue to work with Apple on a variety of the company’s projects when he launches his own company, Apple said in a release. Ive told the Financial Times that he felt the time was right for his departure because he’s recently completed some significant projects, including Apple Park, which had its official opening a few weeks ago. He also says he has a “very clear sense about the health and vitality of the design team” at Apple.” 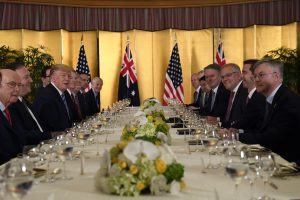 Top line: “World leaders attending a Group of 20 summit in Japan that began Friday are clashing over values that have served for decades as the foundation of their cooperation as they face calls to fend off threats to economic growth. The two-day G-20 meeting comes as leaders grapple with profound tensions over trade, globalization and the collapsing nuclear deal with Iran. While groups like the G-20 endeavor to forge consensus on broad policy approaches and geopolitical issues, they also are divided on an array of issues.”

Top line: “The House passed a $4.6 billion emergency spending bill for the humanitarian crisis on the U.S.-Mexico border Thursday, after Democratic leaders retreated from efforts to amend the legislation to add more restrictions on the Trump administration. The 305-to-102 vote sends the legislation, passed by the Senate earlier in the week, to President Trump, who is expected to sign it. The measure will pump billions of dollars into the budgets of agencies, including the Department of Health and Human Services, that have been overwhelmed by the influx of Central American migrants at the Southern border. Speaker Nancy Pelosi (D-Calif.) sought support for a new version of the bill containing additional protections for unaccompanied minors and restrictions on the administration’s use of funds. But the White House made clear it opposed Pelosi’s changes, and Senate Majority Leader Mitch McConnell (R-Ky.) said he would not take them up.”

Top line: “The U.S. Supreme Court on Friday agreed to decide whether President Donald Trump acted lawfully when he moved to end a program that protects from deportation hundreds of thousands of immigrants who were brought into the country illegally as children, a key element of his hardline immigration policies. The nine justices took up the Trump administration’s appeals of lower court rulings in California, New York and the District of Columbia that blocked as unlawful his 2017 plan to rescind the Deferred Action for Childhood Arrivals (DACA) program implemented in 2012 by his Democratic predecessor Barack Obama. The program currently shields about 700,000 immigrants often called “Dreamers,” mostly Hispanic young adults, from deportation and provides them work permits, though not a path to citizenship. A decision could come in the thick of next year’s presidential race in which Trump is seeking re-election.” 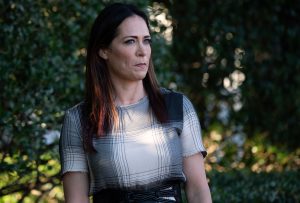 Top line: “Melania Trump’s spokeswoman Stephanie Grisham will get a major new role as both White House press secretary and communications director, the first lady tweeted Tuesday. President Donald Trump didn’t look far for his next press secretary in Grisham, who for the past two years has been the communications director for the first lady. Grisham will keep her current job too. However, Trump has tweaked the job duties before handing the reins to Grisham, whose purview will include a larger scope of responsibility than that of her predecessor Sarah Sanders, and one as yet unprecedented in this administration. Trump has appointed Grisham both White House director of communications as well as press secretary, a senior White House official tells CNN.”

Top line: “John Sanders, the acting commissioner of Customs and Border Protection, announced in an internal email Tuesday that he had handed in his resignation letter — effective July 5 — to acting director of Homeland Security Secretary Kevin McAleenan on Monday. Sanders’ resignation as the administration’s top border enforcer follows heightened scrutiny over the past week of the conditions at migrant children’s detention centers at the southern border.”

9. Twitter will label, but not delete, tweets from politicians who violate its rules – NBC News, Ben Kesslen

Top line: “The social media company announced Thursday a new series of rules around accounts of politicians with large followings, including the introduction of a label that will be applied to tweets from public figures who violate company policies. The announcement comes after years of criticism, particularly from Democrats, of Twitter’s permissiveness toward the president when he publishes tweets that appear to violate the company’s rules. Twitter will apply these new guidelines to verified users with more than 100,000 followers who hold government office or are running for office. If qualifying users violate the rules, the platform will require people to click or tap through a screen before they can see the tweet.”

Top line: “The House Oversight and Reform Committee voted on Wednesday to authorize a subpoena for White House counselor Kellyanne Conway after she failed to appear at a hearing centering on her alleged violations of the Hatch Act. The White House blocked Conway from attending Wednesday’s hearing, prompting the Democrat-led panel to authorize Chairman Elijah Cummings (D-Md.) to issue the subpoena. The U.S. Office of Special Counsel (OSC) issued a report earlier this month citing Conway for multiple violations of the Hatch Act, which prohibits federal employees from participating in political speech while performing their official duties.”