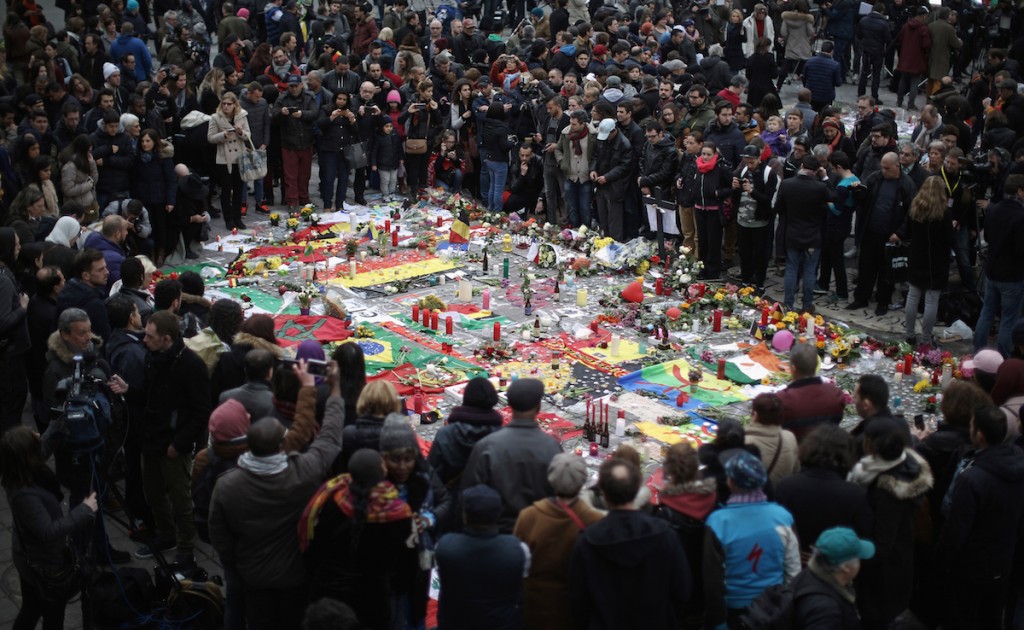 A large crowd of people view tributes at Place De La Bourse in honour of the victims of the terror attacks on March 23, 2016 in Brussels, Belgium. (Photo by Christopher Furlong/Getty Images)

Tragedy struck in Brussels this week. Attacks at two locations in the Belgian capital resulted in 31 deaths—28 victims and three suicide attackers. ISIS claimed responsibility after the explosions that led to numerous raids and arrests. Track some of the biggest developments from the unfolding news below, as well as some of the other biggest stories of the week.

Top line: “Standing at lecterns in a cavernous granite-walled hall in front of Cuban and American flags, the two leaders traded criticism of each other’s countries even as both said they were committed to continuing on the path to normalizing relations.”

Top line: “A top commander for the Islamic State was killed by U.S. commandos in a raid this week, the Pentagon said Friday, as the U.S.-led coalition ratcheted up pressure on the terrorist group in an effort to blunt its ability to strike targets abroad. Defense Secretary Ashton B. Carter said the commander, known as Haji Imam, was one of several terrorist leaders killed during the same week in which the jihadists unleashed a lethal attack on the Belgian capital.”

Top line: “Playing to his image as the anti-politician, Trump asserted that he ‘didn’t come here tonight to pander about Israel. That’s what politicians do — all talk, no action,’ he told the assembled members of the American Israel Public Affairs Committee. But his relatively staid speech stuck largely to themes tailored to appeal to the pro-Israel crowd, including bashing President Obama’s nuclear agreement with Iran as ‘disastrous’ and decrying Palestinians for ‘glorifying terrorists.’

8. US indicts 7 hackers in effort to send a message to Iran—Associated Press, Tami Abdollah and Eric Tucker

Top line: “The seven Iranian hackers charged with attacking dozens of banks and a small dam near New York City may never see the inside of a courtroom, but U.S. officials hope their ‘name and shame’ tactic sends a message to foreign governments that support such attacks.”

Top line: “The former Bosnian Serb leader Radovan Karadžić has been found guilty of genocide over the 1995 massacre in Srebrenica and sentenced to 40 years in jail. The key verdict from a United Nations tribunal in The Hague was delivered 18 months after a five-year trial of Karadžić, accused of being one of the chief architects of atrocities during the 1992-95 Balkans war. The 70-year-old, who insisted his actions were aimed at protecting Serbs during the Bosnian conflict, was found guilty of 10 out of the 11 charges he faced at the international criminal tribunal for the former Yugoslavia.”

Top line: “Garry Shandling, a comedian who deftly walked a tightrope between comic fiction and show-business reality on two critically praised cable shows, died on Thursday in Los Angeles. He was 66.”