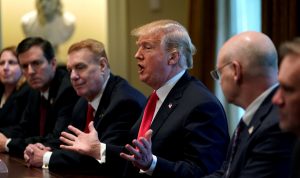 U.S. President Donald Trump announces that the United States will impose tariffs of 25 percent on steel imports and 10 percent on imported aluminum during a meeting at the White House in Washington, U.S., March 1, 2018. (REUTERS/Kevin Lamarque)

Trade conflicts also escalated with China as the U.S. announced tariffs on $50 billion worth of Chinese goods and a restriction on Chinese investment in the United States.

Overseas, Irish voters overwhelmingly voted to overturn a long-standing ban on abortions and Russian journalist Arkady Babchenko revealed his much-publicized murder was staged with help from Ukrainian law enforcement in order to protect him from a murder plot.

Top line: “The Trump administration on Thursday slapped tariffs on steel and aluminum imports from Canada, Mexico and the European Union, prompting outrage from America’s closest allies and major trading partners and setting off a trade war that could see U.S. consumers pay more for everything from canned soup to cars.”

Top line: “The Trump administration shocked the world on Tuesday by tearing up a truce with Beijing and announcing it would impose tariffs on $50 billion worth of Chinese goods and restrict Chinese investment in the United States. China said Wednesday it was ready to retaliate.” 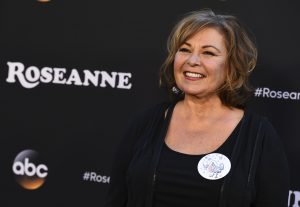 Roseanne Barr arrives at the Los Angeles premiere of “Roseanne” on Friday, March 23, 2018 in Burbank, Calif. (Photo by Jordan Strauss/Invision/AP)

Top line: “ABC on Tuesday abruptly canceled top-rated show “Roseanne” after a series of racist tweets by its star, Roseanne Barr, bringing an end to one of Hollywood’s boldest efforts to reach out to red-state viewers in the Donald Trump era. The decision to cancel the sitcom came after Barr sent out a tweet late Monday referring to Barack Obama adviser Valerie Jarrett, who is black. The tweet read: “Muslim brotherhood & planet of the apes had a baby=vj.””

Top line: “President Trump signed legislation Wednesday to give terminally ill patients the ability to access experimental drugs that have not won approval from the Food and Drug Administration. The “right to try” measure will let patients who have exhausted other options access drugs in early stages of FDA review. Trump has frequently noted his support for the idea, most recently during his State of the Union address in January.”

Top line: “Drug-maker Bayer, agreeing to the largest divestiture in American antitrust enforcement history, will sell agricultural businesses and assets worth about $9 billion to chemical giant BASF, clearing the way for approval of its $66 billion acquisition of Monsanto, the Justice Department announced Tuesday. The assets include Bayer’s canola, soybean and vegetable seed businesses, as well as its Liberty herbicide business, all of which currently compete with Monsanto products.”

Top line: “The Republic of Ireland has voted overwhelmingly to overturn the abortion ban by 66.4% to 33.6%. A referendum held on Friday resulted in a landslide win for the repeal side. Currently, abortion is only allowed when a woman’s life is at risk, but not in cases of rape, incest or fatal foetal abnormality. The Eighth Amendment, which grants an equal right to life to the mother and unborn, will be replaced.” 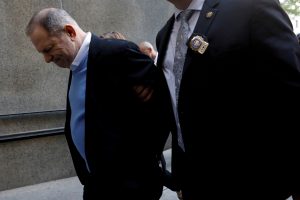 Top line: “Harvey Weinstein was indicted on rape and criminal sex act charges, furthering the first criminal case to arise from a slate of sexual misconduct allegations against the former movie mogul. Manhattan District Attorney Cyrus R. Vance Jr. said Wednesday’s indictment brings Weinstein “another step closer to accountability” for alleged attacks on two women in New York. Weinstein’s lawyer, Benjamin Brafman, said he would “vigorously defend” against the indictment and ask a court to dismiss it. He called the allegations “unsupported” and reiterated that Weinstein strongly denies them.”

Top line: “In a burst of action and words, Mr. Trump demonstrated Thursday that, in some instances, he still has the last word. He pardoned Dinesh D’Souza, a conservative commentator convicted of campaign finance violations, and he said he may extend clemency to former Gov. Rod R. Blagojevich of Illinois and Martha Stewart, the lifestyle mogul. As he has for all of his acts of clemency since taking office, Mr. Trump bypassed the traditional system for granting pardons and disregarded more than 10,000 languishing applications to focus instead on prominent public figures whose cases resonated with him given his own grievances with investigators. Some critics said he may even be signaling associates — like one of his personal lawyers, Michael D. Cohen, who is under investigation for possibly violating federal campaign finance laws — to stay strong and not help prosecutors.” 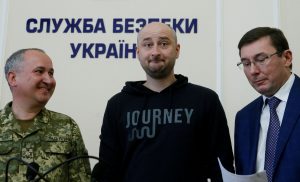 9. Arkady Babchenko tells media he was taken to morgue for staged ‘murder’ – The Guardian, Luke Harding and Christopher Miller

Top line: “The Russian journalist Arkady Babchenko has described how his own death was dramatically faked, in an extraordinary operation involving a make-up artist, pig’s blood and a trip by ambulance to the morgue where he cleaned himself up and watched news of his “murder” on live TV. Speaking at a press conference, Babchenko defended the tactics used by Ukraine’s security services, and said the plot to kill him was terrifyingly real. After being told a contract had been taken out on his life Babchenko said he wanted “to collect my belongings and disappear somewhere in the North Pole. But then I realised, where do you hide? [Sergei] Skripal also tried to hide.””

10. What Starbucks anti-bias training day was like, according to employees – Fast Company, Karen Valby

Top line: “On Tuesday afternoon, over 175,000 Starbucks employees nationwide were asked to do just that—wrestle with the issue over who is made to feel welcome in this country. The coffee giant closed 8,000 stores in an unprecedented shutdown to hold a mandatory four-hour racial-bias training session. It was scheduled in response to a racial-profiling incident in Philadelphia when a white store manager called the police on two black customers who simply wanted to wait for their friend to arrive before ordering. It was a public relations nightmare for a brand that proudly calls itself The Third Place, that safe space next to home and work where everyone belongs.”