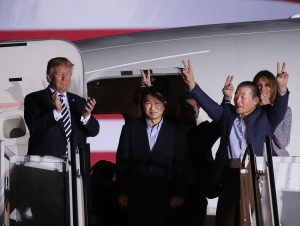 U.S. President Donald Trump and first lady Melania Trump greet the three Americans just released from North Korea, Kim Dong Chul, Kim Hak-song and Tony Kim, upon their arrival on May 10, 2018 at Joint Base Andrews, Maryland. Secretary of State Mike Pompeo traveled to North Korea and returned with the three men who have been detained in North Korea. (Photo by Mark Wilson/Getty Images)

President Donald Trump withdrew the United States from the Iran nuclear accord—a 2015 agreement with Iran aimed at curbing their nuclear capability. He also announced his intention to reinstate economic sanctions against Iran and any foreign company that does business with them.

Trump also announced the date and location of his upcoming meeting with North Korean leader Kim Jong Un. The planned June 12 meeting in Singapore comes on the heels of Secretary of State Mike Pompeo securing the release of three Americans imprisoned in North Korea.

The 2018 midterm election season also kicked off with contentious primary races in several states. And Pentagon officials announced the findings of their investigation into the deadly 2017 attack in Niger that left four servicemembers dead.

Tech giants Google and Microsoft unveiled new products and plans at their conferences. At Google’s I/O, Google Assistant and Android TV were among the stars. Microsoft Build focused on six areas, including cloud APIs, voice assistants, and new Windows features.

In other news, popular favorite Justify won the Kentucky Derby despite a muddy track and the annual Met Gala stunned with celebrities in inventive costumes inspired by Catholic iconography. 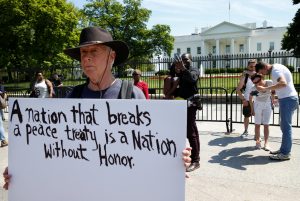 David Barrows protests outside of the White House as U.S. President Donald Trump announces the U.S. withdrawal from the Iran deal in Washington, U.S., May 8, 2018. (Photo by REUTERS/Leah Millis)

Top line: “US President Donald Trump has walked away from the Iran nuclear deal, breaking with allies in Europe and leaving the future of the agreement in doubt. The Iran deal is complicated, as too are the potential consequences of Trump’s decision to pull out of it. To help you get up to speed, here are answers to some important questions.”

Top line: “Three American prisoners freed from North Korea arrived here early Thursday to a personal welcome from President Trump, who traveled to an air base in the middle of the night to meet them. Waving their hands and flashing peace signs, the freed prisoners — Kim Dong-chul, Tony Kim and Kim Hak-song — descended the stairs of their plane, flanked by the president and senior administration officials, including Secretary of State Mike Pompeo, who had flown to Pyongyang, the North’s capital, to secure their release.”

Top line: “President Trump announced Thursday that he will meet North Korean leader Kim Jong Un in Singapore on June 12, locking in a historic, high-stakes summit aimed at curbing the rogue nation’s nuclear weapons program. Trump made the announcement on Twitter just hours after welcoming home three Americans held captive for more than a year in North Korea during a dramatic overnight visit to meet their plane at Joint Base Andrews outside Washington. The triumphant moment appeared to move Trump to overcome any final hesi­ta­tion about the summit, which has been viewed as a potential reward to an outlaw regime that has brutalized its populace and consistently flouted international laws.” 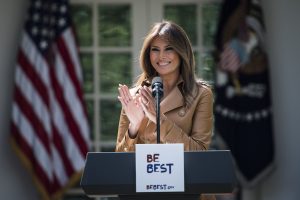 First lady Melania Trump speaks about her new Be Best program and initiatives during an event in the Rose Garden of the White House on Monday, May 07, 2018 in Washington, DC. (Photo by Jabin Botsford/The Washington Post via Getty Images)

Top line: “The White House says “Be Best” will promote “values such as healthy living, encouragement, kindness and respect.” It will also highlight the importance of using social media and the Internet “in positive ways.” And it will support families and children affected by the opioid crisis.”

Top line: “Multiple failures led up to the deadly Niger attack last October, but top military leaders said Thursday that none directly caused the overwhelming enemy ambush that killed four American service members and sent others fighting and running for their lives. “The direct cause of the enemy attack in Tongo Tongo is that the enemy achieved tactical surprise there and our forces were outnumbered approximately three-to-one,” Maj. Gen. Roger Cloutier Jr. told reporters during a Pentagon press conference.”

Top line: “Google also had a lot to announce around the Google Assistant and Android TV. With Assistant, we can expect new smart functionality like the ability for it to call retailers and schedule an appointment with a natural-sounding voice. As far as Android TV, Google has placed a renewed focus on the platform and promises better updates and performance. We also got to go hands-on with the JBL Link Bar that will be coming out later this year.”

Top line: “After two days of Microsoft Build keynotes, we’ve seen a lot. There were cloud APIs. Live coding demonstrations. One time Microsoft pulled away a wall to reveal a demo meeting room. It was truly a thrilling event. But mixed within all of that were some exciting announcements: new Windows features, improvements for voice assistants, and helpful new cloud services. Much of it won’t be widely available until later this year, but here’s the most exciting stuff that Microsoft had to share.”

Top line: “Justify, the Bob Baffert trainee with just three career starts heading into the Kentucky Derby, powered through the slop to win powerfully by 2 1/2 lengths over Good Magic on a sloppy track at Churchill Downs. Audible finished third.  Not only did Justify remain unbeaten at 4-for-4, but he became the first horse since Apollo in 1882 to win the Derby without racing as a 2-year-old. Justify becomes the sixth consecutive favorite to win the Derby.” 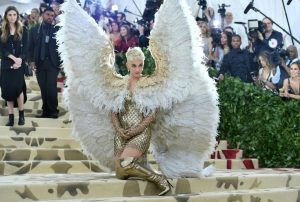 Katy Perry arrives for the Met Gala at the Metropolitan Museum of Art in New York. (Photo by ANGELA WEISS/AFP/Getty Images)

Top line: “Colloquially and affectionately referred to as “fashion’s biggest night out,” the Met Gala 2018 is a pinnacle of iconic style. A fundraising benefit for the Metropolitan Museum of Art in New York City, the event welcomes celebrity stars, young creatives, and industry paragons alike. And the excitement doesn’t stop there—the gala also signifies the highly anticipated grand opening of the Costume Institute’s annual fashion exhibition: “Heavenly Bodies: Fashion and the Catholic Imagination” opening on May 10, 2018.”

~HeatherC is reading about Gardening.