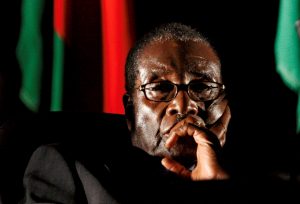 The ongoing crisis in Zimbabwe took a significant turn this week when President Robert Mugabe resigned after ruling the country for nearly four decades.

In the U.S., the Trump administration sued AT&T over the Time Warner merger, imposed sanctions on North Korea, and moved to end temporary protected status for Haitians who came to the U.S. after the 2010 earthquake.

Also this week, Uber disclosed a massive data breach of 57 million driver and rider accounts a year back, several women accused Charlie Rose of sexual harassment, and a U.S. Navy plane with 11 aboard crashed into sea off Japan.

Top line: “Robert Mugabe resigned as Zimbabwe’s President on Tuesday after 37 years of autocratic rule, finally succumbing to the pressure of a military takeover and the humiliation of impeachment. The announcement came minutes into a joint session of the Zimbabwean Parliament in Harare, convened to prise the 93-year-old from power. As the speaker read out a letter from Mugabe, lawmakers broke out in thunderous applause. The impeachment proceedings were immediately suspended.Mugabe’s successor, according to a spokesman for the ZANU-PF party, will be former Vice President Emmerson Mnangagwa, whose firing by Mugabe precipitated the crisis. In the streets outside, crowds erupted in rapturous celebrations, dancing and cheering in joy, raising their fists and waving Zimbabwean flags.” 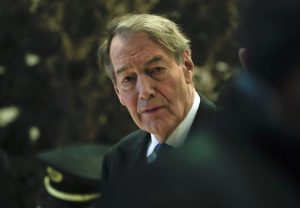 Top line: “Eight women have told The Washington Post that longtime television host Charlie Rose made unwanted sexual advances toward them, including lewd phone calls, walking around naked in their presence, or groping their breasts, buttocks or genital areas. The women were employees or aspired to work for Rose at the “Charlie Rose” show from the late 1990s to as recently as 2011. They ranged in age from 21 to 37 at the time of the alleged encounters.”

Top line: “The Justice Department filed a lawsuit Monday to block the AT&T-Time Warner merger, amid a growing political storm over whether the administration has tried to use its review of the $85 billion deal to force the sale of CNN, a frequent target of President Donald Trump’s media criticism. A DOJ official told reporters Monday that the agency is concerned the combined company will charge competitors hefty fees to distribute Time Warner content, providing an unfair advantage to AT&T-owned DirecTV. Such an arrangement would have a negative impact on American TV viewers, said the official, who spoke on condition of anonymity to discuss the litigation.”

Top line: “Militants killed more than 230 people at a mosque in North Sinai on Friday, detonating a bomb and gunning down worshippers in the deadliest such attack of Egypt’s modern history, state media and witnesses said. No group immediately claimed responsibility, but since 2013 Egyptian security forces have battled a stubborn Islamic State affiliate in the mainly desert region, and militants have killed hundreds of police and soldiers. Worshippers were finishing Friday prayers at the mosque when a bomb exploded, witnesses said. Around 40 gunmen set up positions outside the mosque with jeeps and opened fire from different directions as people tried to escape. Hours after the attack, Egypt’s military launched air strikes on targets in mountainous areas around Bir al-Abed, security sources and witnesses said.”

Top line: “Uber disclosed Tuesday that hackers had stolen 57 million driver and rider accounts and that the company had kept the data breach secret for more than a year after paying a $100,000 ransom.The deal was arranged by the company’s chief security officer and under the watch of the former chief executive, Travis Kalanick, according to several current and former employees who spoke on the condition of anonymity because the details were private. The security officer, Joe Sullivan, has been fired. Mr. Kalanick was forced out in June, although he remains on Uber’s board.”

Top line: “The Trump administration imposed new sanctions on a slew of North Korean shipping firms and Chinese trading companies in its latest push to isolate the rogue nation over its nuclear weapons development and deprive it of revenue. The Treasury Department also designated a North Korean corporation involved in exporting workers overseas. The action Tuesday came a day after the United States returned North Korea to its list of state sponsors of terrorism.”

Top line: “Eight people have been found alive and are in “good condition” after a U.S. Navy plane with 11 people aboard crashed into the sea off Japan on Wednesday, the military said. A search-and-rescue mission for three other people continues, the Navy said. “Our entire focus is on finding all of our sailors,” Rear Adm. Marc H. Dalton said in a statement, adding that the Navy “will be relentless in our efforts.”’

Top line: “Haitians were first given the protections after the earthquake of January 2010, which killed more than 300,000 people, displaced more than 1.5 million people and sparked a cholera epidemic. The protections were extended several times, most recently in May, when then-Homeland Security Secretary John F. Kelly signaled the department might terminate them in six months. Those in favor of keeping the program in place say Haitians make valuable contributions to the American economy and the cities in which they live, and that the already-strained island nation is not ready to absorb tens of thousands of people.”

Top line: “Germany’s centre left is facing growing pressure to consider talks about a centrist coalition with Angela Merkel’s Christian Democrats as Berlin wakes up to the cost of fresh elections in 2018. Martin Schulz, the leader of the Social Democratic party (SPD), ruled out another “grand coalition” after his party’s worst postwar performance in federal elections in September. He reiterated his stance after the collapse on Sunday of talks about a three-way coalition between the CDU, the Free Democratic party (FDP) and the Greens. But Germany’s president, Frank-Walter Steinmeier, a fellow Social Democrat, will appeal to Schulz to reconsider at a meeting between the two on Thursday. There is speculation that the SPD leader could face calls to step aside at a party conference in two weeks’ time if he refuses to change his stance.” 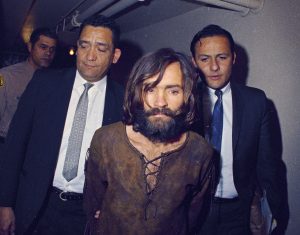 Charles Manson is escorted to his arraignment on conspiracy-murder charges in conneciton with the Sharon Tate murder case, 1969, Los Angeles, Calif. (AP Photo)

Top line: “Charles Manson, whose name became synonymous with evil after his arrest in connection with the 1969 murders of actress Sharon Tate and eight other people, has died of natural causes. He was 83 and serving nine life sentences in California’s Corcoran State Prison at the time of his death, which was confirmed by the California Department of Corrections and Rehabilitation.”

~SonaliK is reading United States of Running by Well+Good