Going to Space and Talking STEAM with Astronaut Leland Melvin 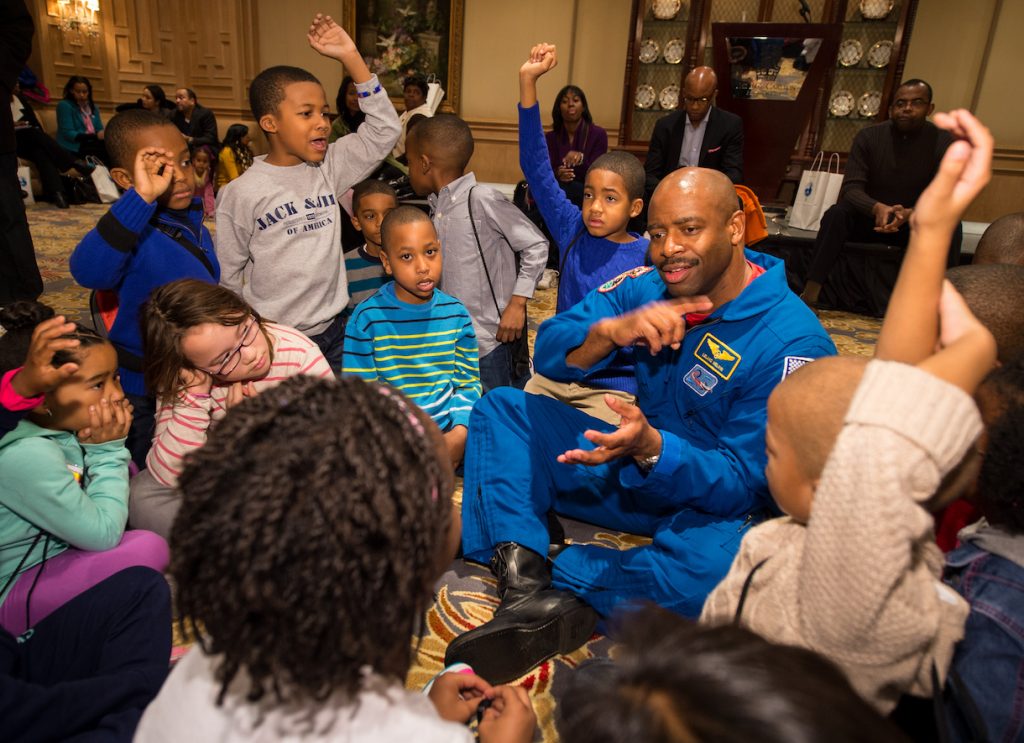 Who better to chat with about the importance of a math and science education than an astronaut-turned-educator? An advocate of STEAM (science, technology, engineering, art and math) learning in schools, Leland Melvin has also logged over 565 hours above Earth so he literally has a perspective very few of us can claim.

In honor of this back to school season, we talked to Melvin about why art is also a key part of a scientific education, how parents and teachers can use technology to engage students, and what kids can do to stand out in these fields. Of course, that’s only once we got through all the questions about what it’s like to live in space, would he go to Mars, and the most challenging thing about being at Zero G (“Using the bathroom because you’re never trained for that on the ground—everything floats,” he says.)

For those of us who will probably never go to space, can you explain what even one hour is like up there?

Well, the first hour in space is your body trying to figure out how it’s gonna be maneuvering through these school bus-sized modules that we call the International Space Station and also the space shuttle. Wait, let me back up: The first hour in space is really when the main bridge is cut off, and you undo your seatbelt and you’re seeing things floating around you that you had dropped on ascent and now you’re trying to figure out how to move and navigate without the confines of gravity. Your body’s getting used to this new environment. Your vestibular system is no longer working; your inner ear is no longer working, and you’re pushing off of things and bumping into things, trying to keep all fluids down (laughs).

In that first hour, do you have the ability to even appreciate the beauty around you and the magnitude of what you’re doing? Or is it more about adjusting to a new normal?

The first few hours you’re really starting to adjust, but maybe five minutes after the main mission’s cut off, I had to get out of my seat to videotape the external tank falling back to Earth because we were using that as a witness plate to see if anything came off, if there was possibly any damage on the space shuttle. And as this thing turned and started going back to the planet, there was a little bit of fuel that was coming out, and I could see this beautiful pattern with the sun backlighting it. Then I noticed our planet and I saw these blues and these snow-capped mountains and this majestic view of this small blue marble that we go around every 90 minutes. That’s when I had a gasp and I just said, “Oh my goodness, look at this…” It was hard to sometimes fathom that beauty when you’re looking at pictures on the ground. That vantage point of seeing our beautiful planet? It changes you fundamentally.

That’s amazing. What would you say is your best memory from your days being an astronaut?

My best memory of being in space was when after all the technical things were done (the mission objective was to install this Columbus laboratory). Our commander was the first female commander, Doctor Peggy Whitson, and she invited us over to have this meal with the Russian segment. We’re going around the planet every 90 minutes at 17,500 miles per hour, and we’re doing this bread breaking with people we used to fight against. That’s when I really changed and realized what this was all about. It wasn’t about the technological things; it was about our humanity and the people working together as one civilization.

Would you go to Mars if you could?

If I could go to Mars and take my family, I would. Right now we’re trying to figure out how to get people there in a short period of time so that you’re not exposed to a lot of solar radiation. [We need a] vehicle that you can exercise in so that when you step on the Martian surface after eight months of travel, you don’t break your legs because your bone density has been altered by maybe 20% because you’re not exercising and [you’re in a] 1G environment. So that’s the kind of thing we have to mitigate before we send people there.

Then there’s just the psychological aspects of being away from the planet for three years. You get there; you’re there waiting for the planets to align again at the closest proximity, Earth and Mars, and it’s eight months to get home. That’s just parts of it. We’ve only been sending people to space for a year or so. Scott Kelly just came home after spending 340 days in space. We haven’t gone into the two- and three-year periods yet. That piece is really important to make sure that you wanna have the right people together. And I think that if I have my family with me, it’d be easier to handle that—or maybe not, I don’t know (laughs).

It’s not like you can send them home, right?

So what would you advise kids who want to become astronauts?

The main thing for our kids to think about is: What do you enjoy doing? What is the thing that really gets you excited in the morning? And then try to figure out how that thing can turn into a job and also can help others and help our civilization. Mark Twain said the two most important days in your life are the day you were born and the day you figure out why. And so figuring out why earlier than later is something kids can do by exploring lots of different things. And STEAM education—Science, Technology, Arts and Math—covers all the things you could possibly want to explore. So, try things. If you’re not good at it, keep trying. You might get good at it, or try something else. Don’t be afraid to try. 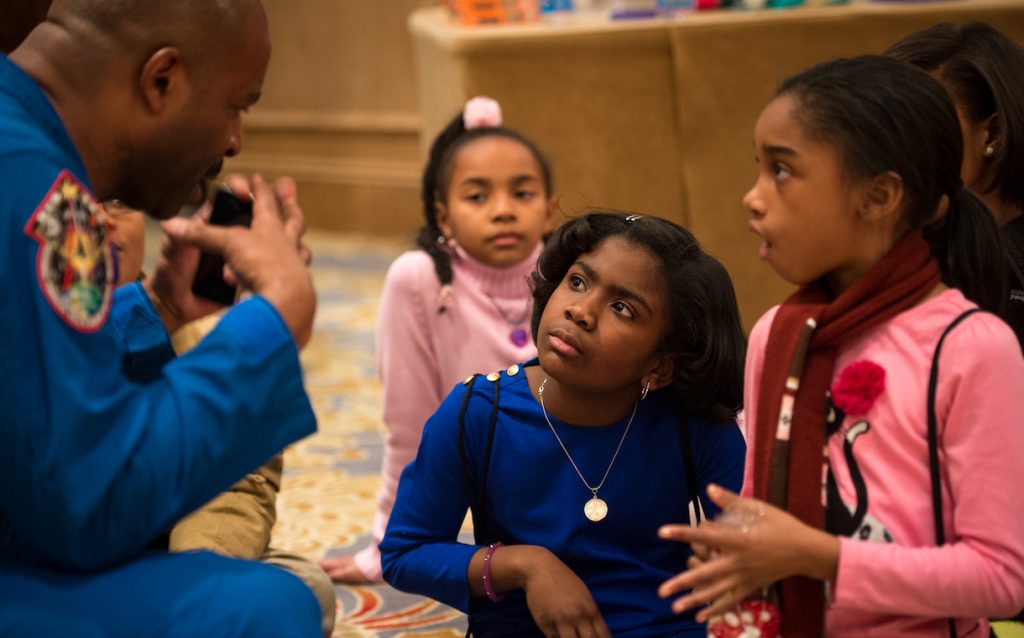 It’s the same thing with educators. We have to make sure that our kids are exposed to as many things as possible, but it’s really hard to inspire someone unless you inspire yourself—especially with technology and things like that where some educators aren’t up on the latest gadgets and the things kids know about. So don’t be afraid to let the kids teach you how to use it. Because then you form this bond between the student and the teacher where you’re flipping the classroom and letting them share their expertise. That’s one of the things as educators that we need to do: let them shine and not just be a sage on a stage preaching and teaching, but flip the classroom and let it turn into a project-based experience where everyone has a role in creating something that can maybe help save someone’s life one day.

To build on that a little bit, why do you think that art is so important if you want to be a scientist? How do all these things intertwine?

When I was training to go to space and working with other people to go to space, I was in Russia and working and living in Russia. And one of the things that I started taking was a Russian language class. That helped me so much. I think of language and music and all this art is lumped into the ‘A’ of STEAM which gives you the ability to communicate with others. Even culinary arts—we all love to eat food. All these things are part of the ‘A’ that allowed me to communicate with people before I went into space and became better friends because I knew that language, I tried different delicacies from Russia. We’re breaking bread on the ground before we’re breaking bread in space and it just brings people closer together. The cultural aspects of people’s lives are the ties that really unite us.

So that’s how I see the ‘A’—it’s that cultural tie. And then you have the graphic arts and you have how you explain this very complex thing to many people so you can work together on this task to solve problems. Someone who has a background in visual storytelling can take something so complex and turn it into a graphic or 3D animation or something that people can actually say, ‘Oh yeah, I actually understand it now’. So that ‘A’ ties us together where the hard science or technology does not. It helps us tell a technological story. 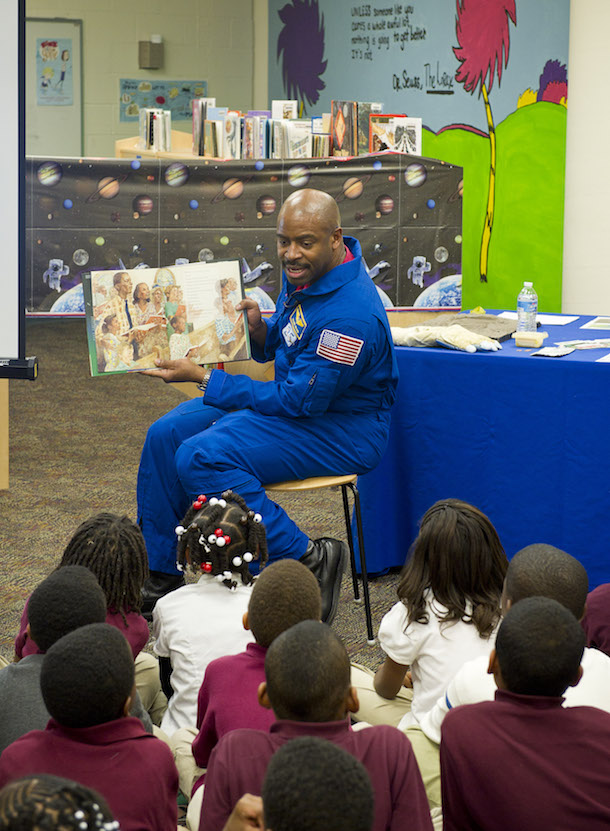 How can parents and teachers use technology, specifically, to inspire kids to get more into STEAM subjects?

Tablets like iPads and Surfaces—the things that we sometimes only play games on—can be used to do other things like write stories and make quick videos that illustrate something that’s going wrong in a community. [For example,] how do we help change the way that the lead paint is in these abandoned houses? And fix them so kids don’t get lead poisoning? So using technology to solve problems, to be storytellers in the community, and to [help illustrate] solutions to problems in the community—that’s something that I think the technology is really adept at.

What are some of your favorite resources for STEAM learners? Where would you point people?

The Maker Movement is incredible; there’s a Maker magazine. Maker festivals are the places where people are looking at creative solutions and things.

I would also recommend these Websites:

Finally, how can kids can stand out in STEAM fields? What do they need to do?

For any kid to stand out, the most important thing is for them to be curious and to have opportunities. So many kids don’t have opportunities to have access to technology or even having access to WiFi at home. And so breaking down a lot of the barriers to the technology, and then allowing them to be curious on all those aspects of STEAM, is in everything we do, day in and day out.

Staying current on the technology is something that I think kids need to be exposed to more. And then give them opportunities to not just be exposed to it, but to have hands-on experiential projects that allow them to be problem solvers at an early age. Project-based learning is a really important way to give kids a chance to be followers in the project and to have different roles in the project so that they can see how they contribute. I think of the Space Station. We have people from all over the world working together to put this thing together—across cultural boundaries, across language barriers…we’re all in this together.

Follow Leland Melvin on Flipboard to get articles about STEAM subjects.