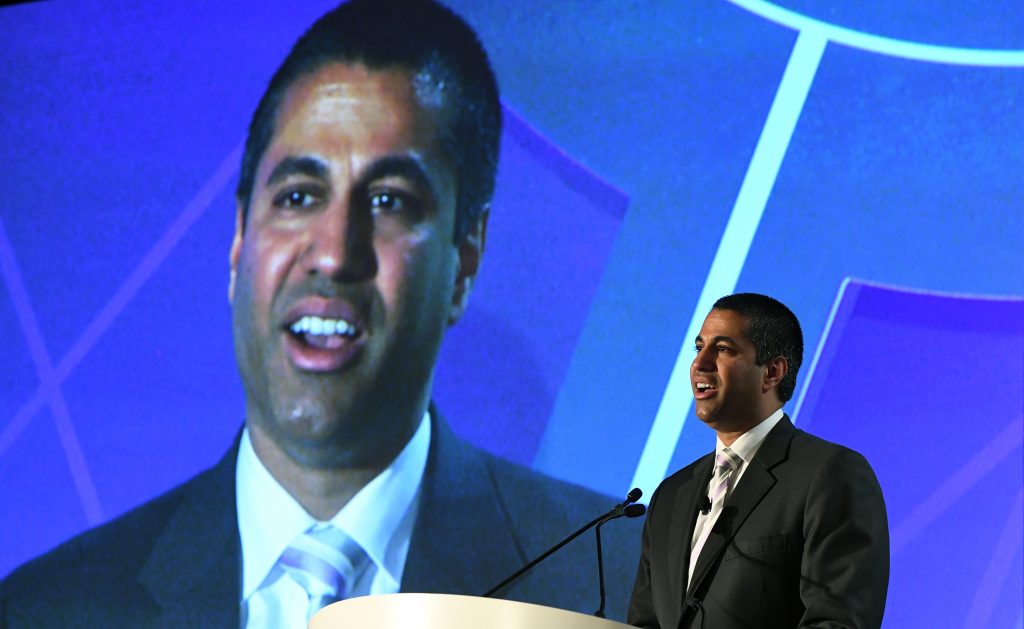 This week the new FCC Chairman, Ajit Pai, moved forward with his plan to end net neutrality rules and voting is scheduled for for May 18. While Uber’s CEO remained in the crosshairs, Silicon Valley continued to make progress on a flying car, and ride-share app Gett purchased another ride-share app called Juno. Meanwhile, Google made official plans to kill Gchat (for good!) and replace it with Hangouts and MIT built a robot that can 3D print an entire building.

Make sure you follow our technology magazine to never miss an important story.

Top line: “Earlier today, Pai shared with his fellow commissioners a plan to ‘reverse the mistake of Title II and return to the light-touch regulatory framework that served our nation so well during the Clinton administration, Bush administration, and the first six years of the Obama administration,’ he said.

“Pai’s net neutrality rollback targets the FCC’s February 2015 reclassification of fixed and mobile Internet providers as common carriers under Title II of the Communications Act. Title II provides the regulatory authority the FCC used to prohibit ISPs from blocking or throttling traffic and from giving priority to Web services in exchange for payment. The FCC used Title II to impose the net neutrality rules after a previous court decision struck down rules issued without the step of reclassifying ISPs as common carriers”

3. The Myth of a Superhuman AI—Backchannel, Kevin Kelly

Top line: “Likewise, there is no ladder of intelligence. Intelligence is not a single dimension. It is a complex of many types and modes of cognition, each one a continuum. Let’s take the very simple task of measuring animal intelligence. If intelligence were a single dimension we should be able to arrange the intelligences of a parrot, a dolphin, a horse, a squirrel, an octopus, a blue whale, a cat, and a gorilla in the correct ascending order in a line. We currently have no scientific evidence of such a line. One reason might be that there is no difference between animal intelligences, but we don’t see that either. Zoology is full of remarkable differences in how animals think. But maybe they all have the same relative “general intelligence?” It could be, but we have no measurement, no single metric for that intelligence. Instead we have many different metrics for many different types of cognition.”

Top line: “During his recent test flight, Cameron Robertson, the aerospace engineer, used two joysticklike controls to swing the vehicle back and forth above Clear Lake, sliding on the air as a Formula One car might shimmy through a racecourse. The flight, just 15 feet above the water, circled over the lake about 20 or 30 yards from shore, and after about five minutes Mr. Robertson steered back to a floating landing pad at the end of a dock.

“The Kitty Hawk Flyer is one of several prototypes the start-up, based in Mountain View, Calif., is designing. The company hopes to create an audience of enthusiasts and hobbyists, who can pay $100 to sign up for a $2,000 discount on the retail price of a Flyer to ‘gain exclusive access to Kitty Hawk experiences and demonstrations where a select few will get the chance to ride the Flyer.’”

Top line: “The S8 doesn’t have any clear photographic advantage over the Pixel. Maybe it will if it ever finds a way to use Bixby for more than just shopping or AR for more than just face filters. Right now, though, the Pixel simply captures better photos more often than the rest. It produces richer detail across the entire image, and it does this regardless of lighting.

“What surprised me the most is how the iPhone now feels a generation behind. It was harder to see last year when we pit the iPhone 7 against the Pixel and the less capable S7. But the S8, along with the Pixel and the G6, illuminates the extent to which Apple has fallen behind”

5. MIT built a robot that can 3D print a building—CNET, Michelle Starr

Top line: “The system comprises a tracked vehicle mounted with a large robotic arm. At the end of this robotic arm is a smaller, precision-motion robotic arm, used to extrude concrete or spray insulation material. It’s free moving, can be customised to print on any suitable surface and is intended to be self-sufficient.

“The team tested the system by printing the basic structure of the walls of a dome 15 metres (50 feet) in diameter and 3.65 metres (12 feet) in height out of insulation foam. The structure took 14 hours to print in total, creating a mould into which concrete is poured.”

6. A “driver-friendly” Uber competitor is nickel-and-diming its drivers after its $200 million acquisition—Quartz, Alison Griswold

Top line: “It took a little more than a year for Marco to convert that pitch into a sale. Juno said today that it had been acquired by Gett, another ride-hailing company in New York, in a deal priced at $200 million. Under the terms of the deal, Marco and his three co-founders, as well as the rest of Juno’s employees, will join Gett to run its New York team. The services will merge and rebrand as ‘Juno by Gett.’”

“And in an email to drivers, ‘Juno & Gett Are Joining Forces,’ Juno said its stock program had been terminated, ‘effective immediately.’”

Top line: “Nintendo expects the success of its new console to reverse eight consecutive years of sales decline, putting an end to a long and painful period for the Japanese icon.

“The video games giant said it expects to sell 10m Nintendo Switch consoles by the end of March 2018 in addition to the 2.7m sold in its first month.”

8. Machine intelligence is the future of monetization for Facebook—TechCrunch, John Mannes

Top line: “One in four engineers at Facebook are active users of its internal artificial intelligence platform. In that sense, the same technology that allows you to take a selfie with a virtual flower-crown at Coachella also allows the company to identify objects within public photos and videos on your News Feed.

“As it becomes more difficult to cram ads onto Facebook without sacrificing the user experience, targeting, engagement and connectivity become the next natural priorities. This explains why Facebook’s ten-year roadmap highlights exactly that — connectivity to get more users on the platform and AI to boost engagement and targeting. In other words, machine intelligence is the future of monetization for Facebook.”

Top line: “Microsoft will build computers even more sleek and beautiful than Apple’s. Robots will 3-D-print cool shoes that are personalized just for you. (And you’ll get them in just a few short days.) Neural networks will take over medical diagnostics, and Snapchat will try to take over the entire world. The women and men in these pages are the technical, creative, idealistic visionaries who are bringing the future to your doorstep. You might not recognize their names—they’re too busy working to court the spotlight—but you’ll soon hear about them a lot. They represent the best of what’s next.”

10. Google Is Killing Gchat For Good and We Have Feelings—Motherboard, Sarah Emerson

Top line: “Almost immediately after its debut, a faction of OG ‘chatters protested the service, and rightly so. Hangouts was slow, heavy, and intrusive. It was, and still is, an aggressively worse form of Google+, the company’s failed social platform. In place of simple emoticons came, as John Brownlee put it, ‘a library of the ugliest ones you’ve ever seen, designed by Google’s resident Fentanyl addict.’ Even Hangouts’ prime offering, the ability to video conference with other Gmail users—which, face it, only your employers make you use—was clunky and tedious, often freezing up in the middle of calls.”