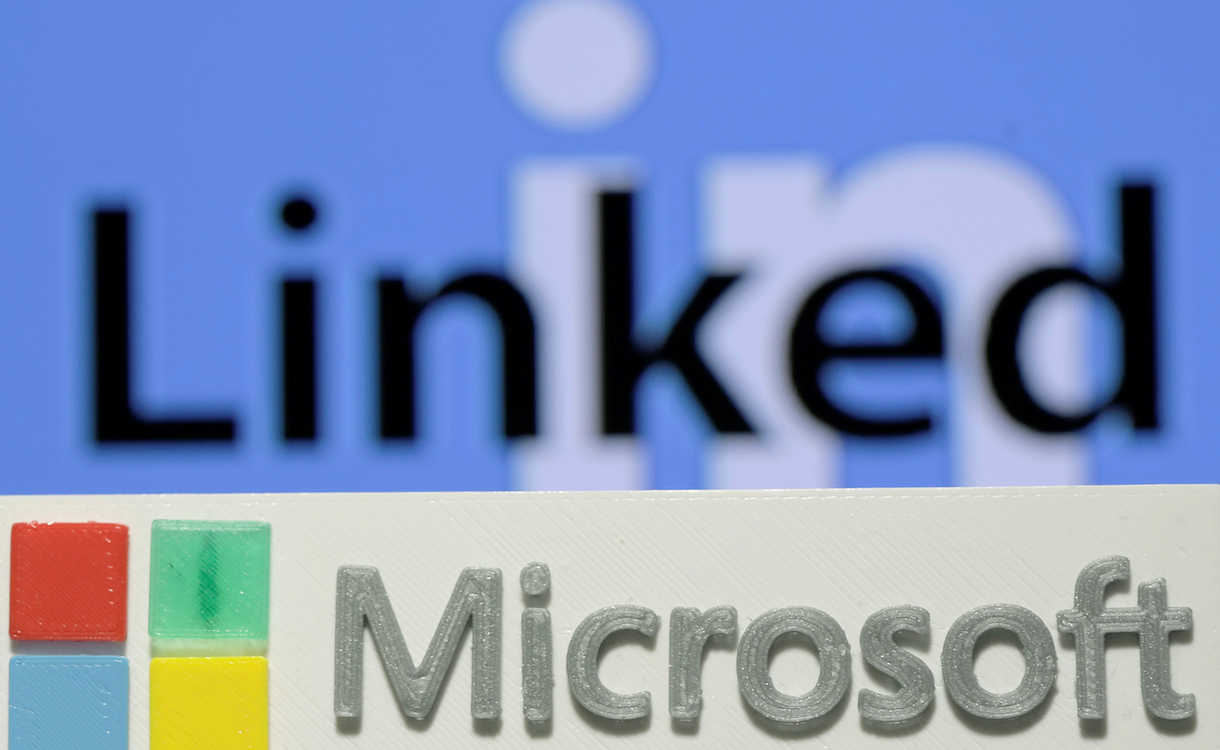 MICROSOFT’S BATTLE TO BUY LINKEDIN:  The $26-billion bid, Microsoft’s biggest deal yet, will allow the company to add a suite of sales, marketing and recruiting services to its core business products as it gears up for next-generation computing. REUTERS/Dado Ruvic/Illustration

1. Microsoft officially closes its $26.2B acquisition of LinkedIn—TechCrunch, Ingrid Lunden

Top line: “Our members still come first. Our commitment to privacy and security will not change. And our partners are still core to our business. We’ll continue to remain focused on growing LinkedIn and creating value for our members and customers.”

Top line: “From today, the four tech giants will each contribute to a shared database populated with media that has been assigned a hash, something akin to a digital fingerprint. This media will include ‘violent terrorist imagery or terrorist recruitment videos and images we have removed from our services.’”

Top line: “Amazon has created a small grocery store in Seattle that will allow customers to pluck drinks, prepared meals and other items off shelves and walk out without having to wait in a checkout line, the company said.”

Top line: “‘The company is investing heavily in the study of machine learning and automation, and is excited about the potential of automated systems in many areas, including transportation,’ said the letter from Steve Kenner, Apple’s director of product integrity, to the head of the National Highway Traffic Safety Administration (NHTSA).”

Top line: “A review conducted by EU Justice Commissioner Vera Jourova found that Facebook, Twitter, Google and Microsoft failed to flag and remove offensive content within 24 hours, with less than half of cases being responded to in that timeframe.”

6. Google says it will reach 100% renewable energy for its global operations in 2017—VentureBeat, Paul Sawers

Top line: “The internet giant has been purchasing renewable energy for a number of years and has many clean energy initiatives in play, including a wind farm in Kenya and a handful of wind farms in California, Texas, and elsewhere. In December last year, the company made its largest purchase of renewable energy ever to power data centers across three countries.”

7. Facebook ranks as the top tech company to work for in 2017—Mashable, Kerry Flynn

Top line: “It ranked as the best tech company to work for in 2017 and came in second among U.S. companies overall, according to a new report from Glassdoor. The ninth annual list is based on employee reviews posted on the job site from Nov. 2, 2015 to Oct. 30, 2016.”

Top line: “That number represents growth of 15 percent since the company announced in September it had accumulated 17 million paying customers since it launched in June 2015.”

Top line: “You can expect up to four times the range, twice the speed and eight times the amount of data in broadcast messages. Those will be particularly helpful for smart appliances and the Internet of Things, where the existing Bluetooth 4.2 standard might not be powerful enough to connect an entire home.”

10. Uber’s new guidelines explain how to get kicked off the service—VentureBeat, Ken Yeung

Top line: “Under the revised community guidelines, Uber is stressing a few main points: Riders and drivers must respect each other, including not shouting, slamming the car door, or swearing. Riders must pick up after themselves and leave the vehicle in the same condition as when the ride began.”

~JessE is reading Google: The Giant