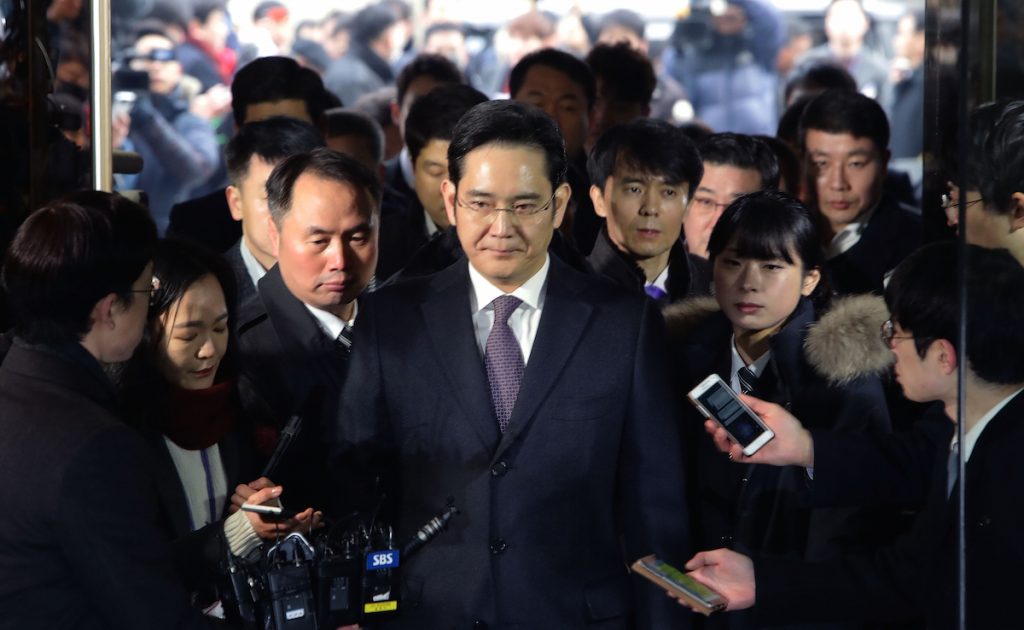 Top line: “A court in South Korea has refused to issue a warrant for the arrest of the acting head of Samsung, Jay Y Lee, over his alleged role in a corruption and influence-peddling scandal that threatens to bring down the country’s impeached president, Park Geun-hye.”

Top line: “While there is no evidence to suggest WhatsApp has used the flaw to surreptitiously intercept messages, Boelter says he reported the vulnerability to Facebook back in April 2016 but was informed that it was ‘expected behavior.’ According to The Guardian the security flaw, which still exists in the latest version of the service’s encryption, is exasperated by WhatsApp’s habit of automatically resending undelivered messages without authorization by the user.”

Top line: “Their fourth quarter report topped analysts’ estimates at the end of their first year as an international streaming service. Netflix added 1.93 million domestic subscribers which beat estimates of 1.38 million. The real growth came abroad though as Netflix added 5.12 million international subscribers, again above the 3.78 million estimate. Shares gained nearly 10% to an all-time high of $146 per share and finished up 0.3% following the announcement.”

Top line: “The Nintendo Switch will launch in Japan, the US, Canada, ‘major European countries’ and Hong Kong on March 3, Nintendo announced in a Japanese presentation late Thursday night. The system will cost $299 in the Unites States, 29,980 yen in Japan, and cost will vary by retailer and country throughout Europe.”

Top line: “Typically, a handful of Facebook employees manage communications just for him, helping write his posts and speeches, while an additional dozen or so delete harassing comments and spam on his page, say two people familiar with the matter. Facebook also has professional photographers snap Zuckerberg, say, taking a run in Beijing or reading to his daughter. Among them is Charles Ommanney, known most recently for his work covering the refugee crisis for the Washington Post. Company spokeswoman Vanessa Chan says Facebook is an easy way for executives to connect with various audiences.”

Top line: “Marlinspike wants to make encryption uncoolly mainstream, in the way Facebook became uncool when everyone’s parents got an account. That’s because Marlinspike said people will find that the classic dismissal of encryption — ‘I have nothing to hide’ — isn’t actually true if the government or nefarious hackers target them. Who doesn’t have an email sitting in their inbox that would embarrass them to death should it be revealed? And Marlinspike wrote that with 27,000 pages of federal statutes and 10,000 administrative regulations, ‘You probably do have something to hide, you just don’t know it yet.’”

8. Vine is back as a 6-second camera app, and users are furious—BGR, Mike Wehner

Top line: “Twitter’s micro video app Vine died an untimely death — or, if you never used it, a totally logical and appropriate death — late last year, much to the chagrin of the dozen or so ‘Vine stars’ who rose to fame with their goofy 6-second videos. Shortly after the announcement of its demise, Twitter seemed to have second thoughts and revealed that it would bring Vine back, but as a camera app that creates similarly short clips and then saves them locally so you can share them wherever you want. Well, Vine Camera is finally here, and apparently it ‘just isn’t the same.’”

Top line: “The move is likely an attempt on Twitter’s part to slim down in troubling times. The good thing is that none of Fabric’s useful services – including Crashlytics for reporting crashes, Digits for user authentication, Answers app analytics and Nuance for speech recognition – are going away, as Google will continue to offer them to developers as they are.”

Top line: “The updated rules include ‘specific approval requirements’ for any data that can’t be evaluated right away, and limit data collection to the smallest the CIA needs to achieve its goals. Agents can’t just scoop up as much as they can and hoard it for later, in other words. The agency will also limit access to unevaluated data, insist on training for handling that data and require the deletion of that data no more than 5 years after it’s available.”