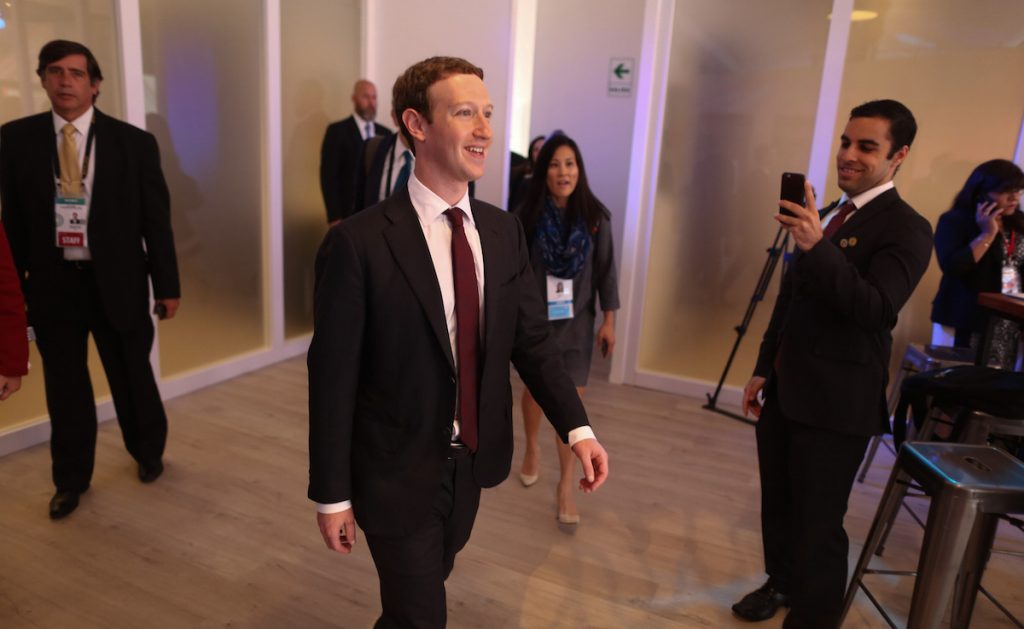 Despite previous reports to the contrary, Mark Zuckerberg confirmed he is not running for president. However the man who is president, Donald Trump, is still using an unsecured Android phone. Overseas, China made it illegal to use a VPN without government approval and trendy Chinese app Meitu demanded more permissions and personal data. Google’s “Pearl” became the first virtual reality film (as well Google’s first) to be nominated for an Oscar. (It was also Amazon’s first year to be nominated for an Oscar–for Manchester by the Sea.)

Top line: “‘No,’ Zuckerberg wrote in response to a question asking if he had any plans to run for president. ‘I’m focused on building our community at Facebook and working on the Chan Zuckerberg Initiative,’ referring to the limited-liability corporation he and his wife, Priscilla Chan, founded in 2015 to advance human potential and promote equality through major bets in education and science research. Zuckerberg did not immediately respond to follow-up questions about whether he’d explicitly ruled out a run.”

Top line: “In a profile of the president’s time so far in the White House, the Times reports that Trump has held on to his ‘old, unsecured Android phone’— previously reported to be a Samsung device — despite some protests by his aides. According to the Times, he used it to tweet just last night, suggesting he would ‘send in the Feds’ to Chicago. (The tweet was apparently sent in response to a Bill O’Reilly segment.)”

Top line: “The nation’s ministry of industry and information technology announced a 14-month ‘cleanup’ of internet access services, including making it illegal to operate a local VPN service without government approval.”

Top line: “It was, in other words, a protest as sprawling, diverse, and ubiquitous as the platform that spawned it: Facebook. The social media platform of more than a billion people is stunning in both its scale and specificity. It’s the world’s town square, a venue far-reaching enough to connect people of all races, religions, and nationalities and targeted enough to elevate the petty squabbles of the local PTA meeting. All of it was there at the Women’s March and at marches around the world: a massive outpouring of highly distributed opposition to the new most powerful person in the world, all under an umbrella that felt wide enough to shelter the divergent passions of millions.”

Top line: “Almost as soon as infosec bods became aware of it, they found numerous serious privacy flaws and avenues for potential leaks of personal data. One eagle-eyed researcher found the Android version of the app asked users for dozens of intrusive permissions, and sends the data to multiple servers in China—including a user’s calendar, contacts, SMS messages, external storage, and IMEI number.”

Top line: “With the new search bar, Snapchat aims to make it easier for its users to find friends, groups, Discover publishers and Our Stories. By tapping into the Search box, a new overlay appears, letting you quickly access friends’ messages or stories through its ‘Quick Chat’ suggestions, connect with your group chats, flip through a list of new friends, add others, or find friends in your contacts.”

7. Facebook’s “Trending Topics” Will Now Be The Same For Everyone Nearby, List Story’s Publisher—Consumerist, Mary Beth Quirk

Top line: “Previously, topics might have trended due to high engagement on a single post or article, but with the update, Facebook will look at the number of publishers that are posting articles about the same topic, and the engagement around those articles.”

Top line: “Zuckerberg says that he and Barra share the belief that the next great step in computing is VR and AR, a sentiment that appears to be shared with most of the tech community. Although Oculus produces a high-end VR environment that requires much more horsepower to power than what our mobile devices are capable of, Google has also been working on getting consumers interested in these platforms with Cardboard, Daydream, and Tango.”

9. Google’s virtual reality film has been nominated for an Oscar—Business Insider, Hannah Roberts

Top line: “Google’s virtual reality film ‘Pearl’ has been nominated for an Oscar in the best animated short film category, according to Mashable. It’s the first time a VR film, as well as Google, has been nominated.”

Top line: “The Federal Communications Commission has a new chairman, Ajit Pai, and, like President Trump who named him Monday as the agency’s head, he’s not a fan of unnecessary regulation — which in his view, includes Net neutrality.”