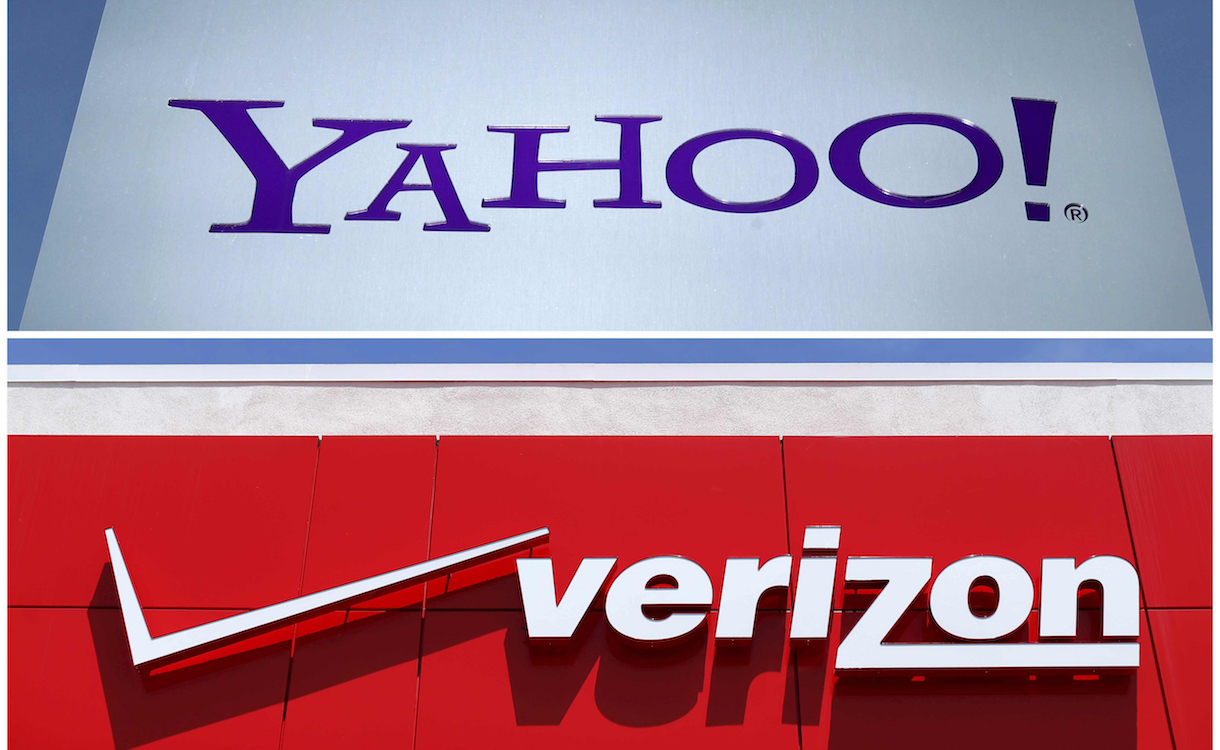 A combination photo shows Yahoo logo in Rolle, Switzerland (top) in 2012 and a Verizon sign at a retail store in San Diego, California, U.S. In 2016. REUTERS/File Photos

After months of rumours, Verizon officially announced on Monday that it will buy Yahoo‘s core internet operations. PayPal cofounder and Facebook board member Peter Thiel gave a speech at the Republican National Convention, offering his support for Donald Trump and becoming the first openly gay speaker at the RNC to speak about his sexuality. Aqulia, Facebook’s solar-powered unmanned plane, took its maiden flight, and Tinder announced Social—a new dating tool for groups.

1. Verizon to buy Yahoo for $4.83 billion, merge it with AOL—CNET, Richard Nieva

Top line: “Verizon has said it will pay $4.83 billion in cash for Yahoo’s core internet business, which includes iconic web brands like Yahoo Mail, Fantasy Sports, the photo storage site Flickr and search, as well as the company’s advertising technology.”

Top line: “Thiel, one of the most influential figures in tech, took the stage at the Republican National Convention on Thursday night and implied that Silicon Valley is out of touch.”

Top line: “Pokémon Go, the augmented reality game that might as well be everyone’s second job, has become the most downloaded mobile app in its first week of release in the history of the App Store.”

Top line: “With the release of Tinder Social, the IAC-owned company is looking to replicate the same behavior that seems to create genuine relationships in the real world — meeting people through mutual friends.”

6. iPhone 7 to be released during the week of September 12 –Evleaks—9to5Mac, Jeff Benjamin

Top line: “Evan Blass, prominent leaker and VentureBeat reporter, has revealed what he believes to be the release window for the next iPhone. If his hunch is correct, then we should expect the iPhone 7 and its various iterations to be released during the week of September 12th, 2016.”

Top line: “The administration reiterated that the US is the first to free up spectrum above 24 GHz for the high-speed networks that are said to be 100 times faster than the 4G we use today.”

Top line: “SoftBank Chief Executive Masayoshi Son said the acquisition marks a “paradigm shift” at the company to invest in the Internet of Things, as he bets on demand for internet connectivity across everyday devices as diverse as automobiles and refrigerators.”

~JessE is reading All Things Technology