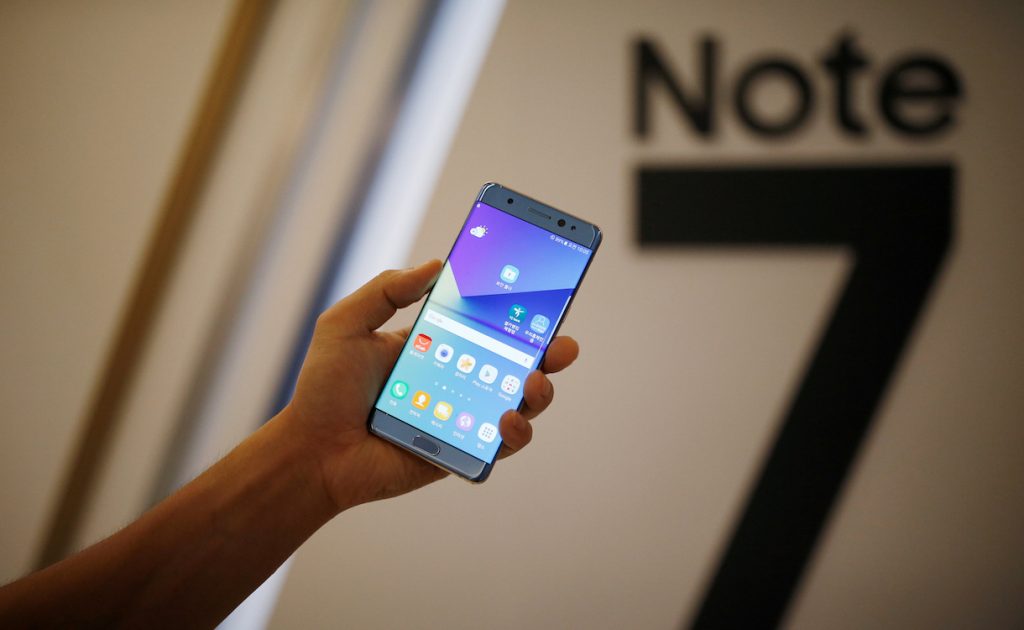 A model poses for photographs with a Galaxy Note 7 new smartphone during its launching ceremony in Seoul, South Korea, August 11, 2016. REUTERS/Kim Hong-Ji/File Photo

Samsung was forced to recall its Galaxy Note 7 devices this week after issuing a statement confirming a fault. Sixty-eight million users were impacted by a Dropbox hack and the European Commission ruled that Apple should repay Ireland $14. billion.

Top line: “Samsung is recalling all Galaxy Note 7 units it has shipped so far due to the risk of malfunction and fire.”

Top line: “A Dropbox security breach in 2012 has affected more than 68 million account holders, according to security experts.”

Top line: “The event’s official details won’t be unveiled until the Apple bosses take to the stage, but a number of rumours and leaks give a hint at what is likely to be made available.”

Top line: “An Israeli satellite operator’s deal to sell itself to a Chinese company is imperiled. Planned launches of communications satellites that support international mobile phone service and digital television are delayed and put in doubt. NASA’s cargo deliveries to the International Space Station will probably be disrupted.”

5. Irish government caught in a trap between Apple, the EU, and its own citizens—VentureBeat, Chris O’Brien

Top line: “Following a European Commission ruling that Ireland must recover $14.5 billion in taxes from Apple, the country’s government finds itself confronting a politically agonizing decision about whether to appeal.”

Top line: “While science fiction has focused on the existential threat of A.I. to humans, researchers at Google’s parent company, Alphabet, and those fromAmazon, Facebook, IBM and Microsoft have been meeting to discuss more tangible issues, such as the impact of A.I. on jobs, transportation and even warfare.”

Top line: “It’s one of the last two years’ biggest success stories, but Musical.ly’s triumph was rooted in the failure of a struggling startup called Cicada, an educational app featuring short explainer videos, that simply didn’t take off.”

8. Instagram will FINALLY let you zoom in on photos—The Next Web, Napier Lopez

Top line: “It uses a simple pinch gesture, as you would expect (although you have to hold the gesture or it snaps back). It works with video as well, and covers content on your feed, profiles and in Explore.”

Top line: “Smart iron? Check. Smart toothbrush? Check. Smart fridge that takes photos of its contents with three cameras and then sends it to your phone every hour so you always know what’s inside? Check.”

10. Intel/Microsoft deal will finally push VR out to the masses—VentureBeat, Jack Gold