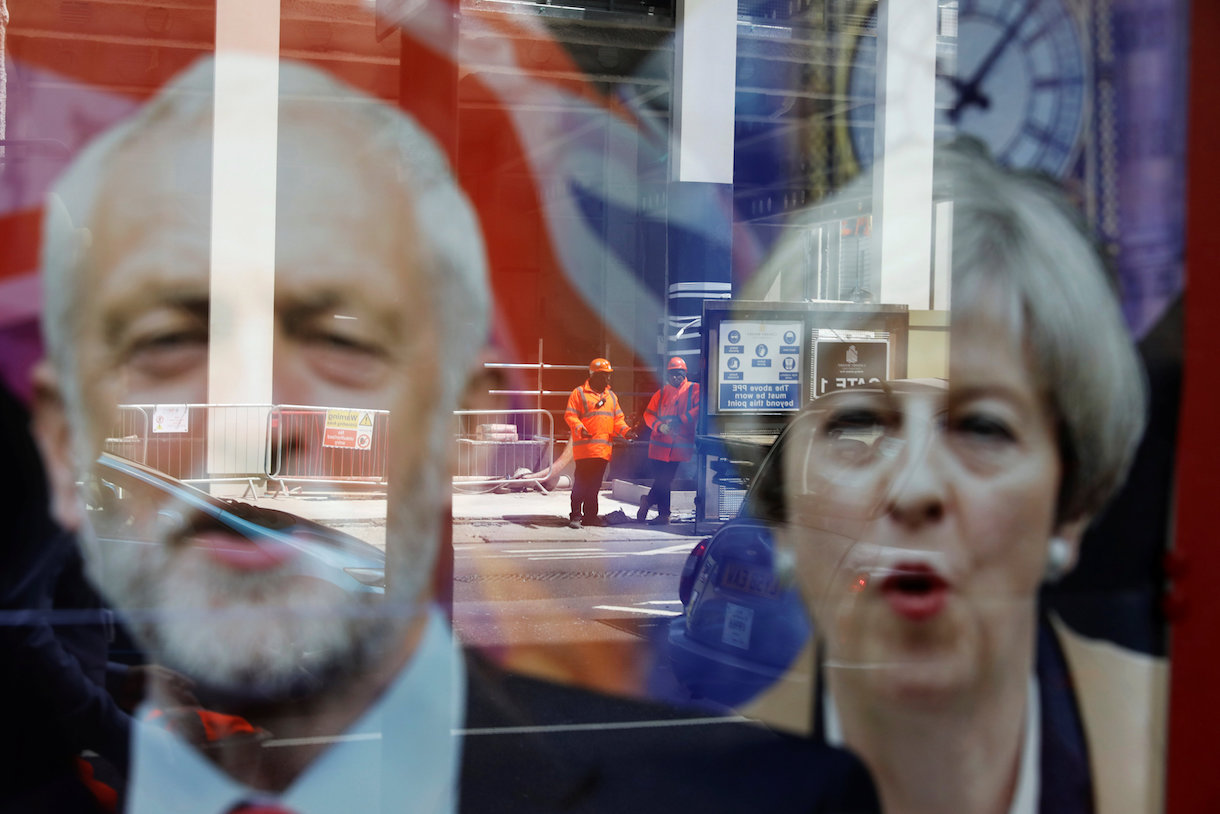 Workers in protective equipment are reflected in the window of a betting shop with a display inviting customers to place bets on tbe result of the general election with images of Britain’s Prime Minister Theresa May and opposition Labour Party leader Jeremy Corbyn, in London, June 7, 2017. REUTERS/Marko Djurica TPX IMAGES OF THE DAY

The British general election Thursday resulted in a hung parliament, after no party was able to gain enough votes to win an outright majority. This surprising outcome rippled across the U.K. and the world.

Brits cast votes for their chosen Member of Parliament (MP) with the highest turnout in 25 years at 68.7 percent. The votes cast counted toward the corresponding political party. Despite smaller parties taking part, it was seen as a two horse race between current Prime Minister Theresa May’s Conservative Party and the Labour Party headed up by Jeremy Corbyn. Polls throughout campaigning suggested the Conservatives would win by a large margin and May began the campaign with the highest approval rating of any Prime Minister since the 1970s.

May called the election in April, with only seven weeks notice. She was looking to seek an increase in the Conservative majority in parliament. May has not previously been voted into the leadership role, having taken over from former leader David Cameron following his resignation in the wake of the E.U. Referendum.

Dubbed the “Brexit election,” May’s aim was to create a “strong and stable” Britain ahead of negotiations, as well as creating a mandate to take into Brexit talks. The Conservatives used the campaign trail to discuss their plans for foreign aid and fox hunting plus plans to lower immigration and raise the tax-free personal allowance.

Labour’s manifesto included raising the national minimum wage, scrapping tuition fees and de-privatisation of railways. Their slogan, “For the many, not the few” urged voters to think of everyone in society and not just their own needs.

Both party leaders faced criticism ahead of voting day. May came under fire for refusing to participate in television debates with any fellow candidates and her back-tracking on care costs for the elderly. Corbyn was regularly questioned over his alleged IRA links and comments on foreign policy.

Although all parties had their own election aims, following the terror attacks in Manchester and London, the focus of the campaign shifted in recent weeks to security, the economy and the country’s free NHS system.

Final polls before voting began said it was still looking like a Conservative landslide. But as voting booths closed Thursday evening the exit poll, commissioned by the BBC, ITV and Sky News, provided a shock result as it predicted a hung parliament.

In order to take power, British political parties must gain a majority of 326 MP seats from 650 constituencies across the country. A hung parliament is declared when no party wins enough votes to make up that amount alone.

By Friday the Conservatives had 318 seats and were declared the party with the highest number but not enough to gain a majority win. The total is 13 less than they achieved during the 2015 general election when David Cameron led the Conservatives to a win. A blow to the party who had expected to keep all of its current seats and take over SNP and UKIP positions.

Although Labour didn’t win the most votes, the result was seen as a huge success—much better than the earlier poll predictions and an increase of 30 seats from their 2015 figures. Their effort to engage young voters paid off, with 66.4 percent of 18 to 24-year-olds heading to the polls.

While Corbyn and May both retained their local area seats, a host of high-profile names missed out. Liberal Democrat candidate and former deputy prime minister Nick Clegg lost his place to a Labour competitor after 12 years of holding the position. UKIP leader Paul Nuttall stepped down with immediate effect Friday after the party won no seats. Alex Salmond, former leader of the Scottish National Party (SNP), lost his seat to Conservatives. It was a bad night for SNP in general as Nicola Sturgeon’s party dropped a third of the seats they won in 2015 with voters moving towards Conservative candidates.

May faced criticism over the disastrous results for the Conservatives. Despite calls to step down from both Corbyn and members of her own party, May plans to stay in power and work with Northern Ireland’s Democratic Unionist Party (DUP) who won ten seats. Together the two parties will make up enough MPs to remain in charge.

On Friday, May visited the Queen at Buckingham Palace to ask for permission to form a new government, before addressing the nation in front of 10 Downing Street and announcing her plan.

“What the country needs more than ever is certainty, and having secured the largest number of votes and the greatest number of seats in the General Election, it is clear that only the Conservative & Unionist Party has the legitimacy and ability to provide that certainty by commanding a majority in the House of Commons,” she said.

By Saturday her top two advisors had resigned from their positions following the Conservative losses but May continued to work on her new allegiance with DUP.

With a week to go until Brexit negotiations begin, all eyes are on the proposed new coalition and how it will work within both the U.K. and wider European political field.

General Election 2017: All the news, analysis and opinion in the election aftermath, curated by Flipboard UK

Brexit Fallout: Delve into the connections between the latest vote and the U.K.’s referendum result

Theresa May: What is May’s plan going forward? Find out more here

Jeremy Corbyn: After his shock success, discover more about the Labour Party leader

U.K. Economy: The pound tumbled after the election result, learn more about how UK politics impact the economy

Democratic Unionist Party: An in depth look at the party going into partnership with the Conservatives