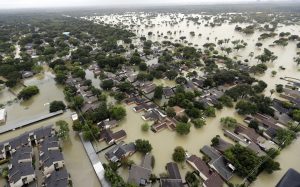 Hurricane Harvey ravaged southeast Texas this week, after it made landfall as a category 4 storm late Friday, leaving massive destruction in its wake and wreaking havoc on life and property.

In less than a week, the disaster brought catastrophic flooding and howling winds to Houston and the surrounding areas, managing to dump about 27 trillion gallons or 51 inches of rain.

Over a million people have been displaced and around 33 counties in Texas have been added to the federal disaster declaration according to reports by CNN and ABC News. About 364,000 people have registered for assistance with the Federal Emergency Management Agency (FEMA) and another 450,000 victims are expected to ask FEMA for disaster assistance. Currently, there are over 33,800 people in shelters across Texas.

On Thursday, the Energy Department estimated around 200,000 customers were without power and about 120,000 residents were without water in Beaumont, Texas. Seventy-two thousand people were rescued by federal forces and other groups. According to the Texas Division of Emergency Management, about 93,942 homes have been damaged or destroyed. On Friday, FEMA distributed over 1,900,000 meals and over 1,960,000 liters of water.

At this stage, it is difficult to confirm the total number of fatalities caused by the disaster, but some estimates put the number of lives lost at 46. The death toll is expected to rise.

An analysis by the University of Wisconsin’s Space Science and Engineering Center concluded that Harvey was a one-in-a-thousand year event, the scale of which was unprecedented.

“In looking at many of these events [in the United States], I’ve never seen anything of this magnitude or size. This is something that hasn’t happened in our modern era of observations,” said Shane Hubbard, a post doctoral researcher at Wisconsin.

On Sunday, FEMA Administrator William “Brock” Long said, “This will be a devastating disaster, probably the worst disaster the state’s seen. The recovery to this event is going to last many years to be able to help Texas and the people impacted by this event achieve a new normal.”

On Tuesday, President Trump and first lady Melania Trump visited Austin and Corpus Christi, Texas, to meet with local, state and federal officials and to survey the damage caused by the hurricane.

Talking about the relief efforts, Trump said in Corpus Christi, “We want to do it better than ever before. We want to be looked at five years, 10 years from now, as this is the way to do it.”

In Austin, Trump added, “The sad thing is that this is long-term. Nobody’s ever seen anything this long. Nobody’s seen this kind of water. Probably, there’s never been something so expensive in our country’s history.”

Vice President Mike Pence also traveled to Texas, two days after Trump’s visit, where he met with the victims of the disaster. In his remarks, Pence thanked first responders and local officials and added that the “full resources of the national government are being brought to bear in a consistent way.”

On Thursday, Trump pledged $1 million of his personal fortune to help victims in Texas and Louisiana. The White House and the Congress are in talks to authorize about $6 billion in emergency assistance, where $5.5 billion will be added to the Disaster Relief Fund and another $450 million could be approved for the Small Business Administration’s Disaster Loan Program.

Calling Houston’s recovery from the disaster a “multi-year project,” Texas Governor Greg Abbott said, “This is going to be a massive, massive clean-up process.”

Hurricane Harvey continued to pummel Texas throughout the week, making three landfalls during that period. The storm first struck between Port Aransas and Port O’Connor around 9:45 p.m. with 130-mile-per-hour winds, however, the eye of the storm soon changed course to Victoria and other inland cities. Later, the storm made a second landfall as category 3 on the Northeastern Shore of Copano Bay. And finally, Harvey made the third landfall as a tropical storm about 5 miles west of Cameron, Louisiana on Wednesday.

Panic and chaos were the order of the week as the Addicks Reservoir over-flooded in northwest Houston, a chemical fire broke out at the Arkema plant in Crosby, Texas and 118,000 people were without drinking water in Beaumont.

On the economic front, Hurricane Harvey has been the most expensive natural disaster in the history of the U.S. Moody’s estimates put the total losses at $75 billion as a result of property damage, lost wages and disrupted businesses.

Many oil refineries, including the largest oil refinery in the country, shut down following the disaster, thereby adding to bullish market sentiment for oil and gas prices. Gas shortages were also reported in San Antonio, Dallas, Austin and other cities. As a result, gas prices soared nationwide, reaching two-year highs of $2.52 a gallon on Friday.

According to a report by the Associated Press, there were far fewer homes and properties with flood insurance than just five years ago. “The sharp, 9 percent drop in coverage means many residents fleeing Harvey’s floodwaters have no financial backup to fix up their homes and will have to draw on savings or go into debt — or perhaps be forced to sell.”

Another piece by USAToday cited a report by the Congressional Budget Office (CBO) that said, “The debt-ridden National Flood Insurance Program, which is bracing for a potentially unprecedented number of claims from Hurricane Harvey, takes in in about $1.4 billion less than it needs annually to pay projected costs.”

Three nations – Mexico, Venezuela and Taiwan, have offered aid and assistance to the U.S., a stark contrast from Hurricane Katrina in 2005, when at least 25 nations stepped up to offer aid, emergency and medical supplies, pledged donations and a range of other assistance to Katrina victims.

The water is now receding and as Texas struggles to get back up on its feet, there’s another storm brewing in the Atlantic. The path of Hurricane Irma, which elevated to category 3 on Thursday, is still unclear but people in the Caribbean and the southeast U.S. coast have been forewarned.

As recovery efforts continue in Texas, follow the aftermath of the disaster via these magazines and topics on Flipboard.

Hurricane Harvey: Track the latest news coming out of Texas.

Hurricanes: Find everything you wanted to know about hurricanes here.

Weather: A primer on the weather.

FEMA: Check out all that the Federal Emergency Management Agency is doing in Texas.

Congress: Keep on top of the policy discussions and statements from lawmakers.