What Would Steve Jobs Do?

The magic in the Internet of Things.

The first time I met Steve Jobs, he was impatiently sitting, marker in hand, in a conference room at Apple, next to a whiteboard.

It was the end of 2001, just after 9/11 and our world was in ashes. Everything felt hopeless, wrecked and over. But Jobs was optimistic. “We’re going to innovate our way out of this,” he said—the “we” referring, I supposed, to both the United States and Apple, which was still teetering perilously close to being bankrupt.

I was there because Jobs had tapped TIME Magazine, where I worked, to get the exclusive on Apple’s innovative, flat-panel iMac. But first, Jobs wanted to explain the context for his new device. He quickly sketched out his vision on the whiteboard: A desktop computer,  surrounded by a music player, a TV, a camera and a few other unlabeled gizmos. The idea, he said, was that the intelligence of the personal computer was transitioning to the gadgets at its edges,. The personal computer, though, was still the hub—the thing that info-powered and effortlessly connected everything. 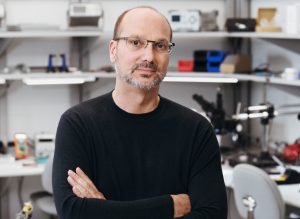 Jobs and his future-vision came to mind last week when Andy Rubin, Android’s architect, at last unveiled his top-secret company, Essential, and its  new products, “Phone,” a titanium cellphone; and “Home,” a voice-powered speaker. On the company website, Rubin looks very Jobsian in his black T shirt and six-day beard, and he sounds very Jobsian, too. (“Premium materials and true craftsmanship shouldn’t be just for the few,” he advises. “Simple is always better.”) The minutely coordinated media launch of his new company and products also took a page from Jobs—Rubin gave the exclusive inside (print) look to Wired (The Father of Android is Back, and He’s Built the Anti-iPhone) and digital sneak peek to The Verge (Exclusive: This is the Essential Phone.) And the first on-stage interview went to Walt Mossberg & Co. at the Code Conference.

For all the good Android has done to help bring technology to nearly everyone it has also helped create this weird new world where people are forced to fight with the very technology that was supposed to simplify their lives.  —Andy Rubin

It’s no coincidence that Rubin chose the past week—one week before Apple’s annual WWDC—to launch his company, and its first products. Reading all the Essential coverage, one can’t help but wonder whether, were Jobs alive today, he’d be standing up next week and doing one of his famous reveals, explaining that the core has shifted from the computer, to the iPhone—and now we believe to this insanely cool device, right here. And then with a magician’s flourish, the thing is unveiled—the centerpiece of the connected home, the magic hub of the Internet of Things, the iWhatever! Which is, come to think of it, the context that Rubin pretty much gave last week, albeit without the flourishes.

As usual, the pre-WWDC rumor mill is running faster than a Tesla driven by a VC on the verge of a liquidity event. Many of the pundits expect that Apple will be announcing its own  Siri-powered home device to compete with the Home, Amazon’s Alexa-controlled Echo and Google’s Assistant-powered Home. (Notably, John Gruber, the Apple pundit, has been thus far noncommittal.) Just as interesting is that Rubin is competing with the big dogs by not competing—he says he’d like the Home to be compatible with Siri, Alexa and Assistant. On that front, at least, he’s unlike Jobs.

“All of these [companies] have ecosystem envy and want to create their own ecosystem,” Rubin said. “But consumers don’t want just Samsung stuff in their house. They want diversity.”—Recode

Apple could use a new hit product, the nifty AirPods notwithstanding. While plenty of people have purchased its smartwatch, I’ve met few who are ecstatic about it—the feeling that Apple products typically engender. We might get some insight Monday into how much that has to do with the man, versus the company he left behind. And so will the aspiring magicians, waiting in the wings. 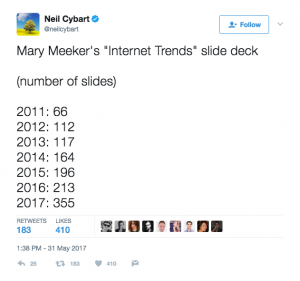 WATCH: I’m trying to stay away from politics in this email, but seriously? The interview at Code with Hilary Clinton freaked me out. The argument that this was the first campaign in which we saw data and social media weaponized is chilling. Tap here if you dare.

See you next week—