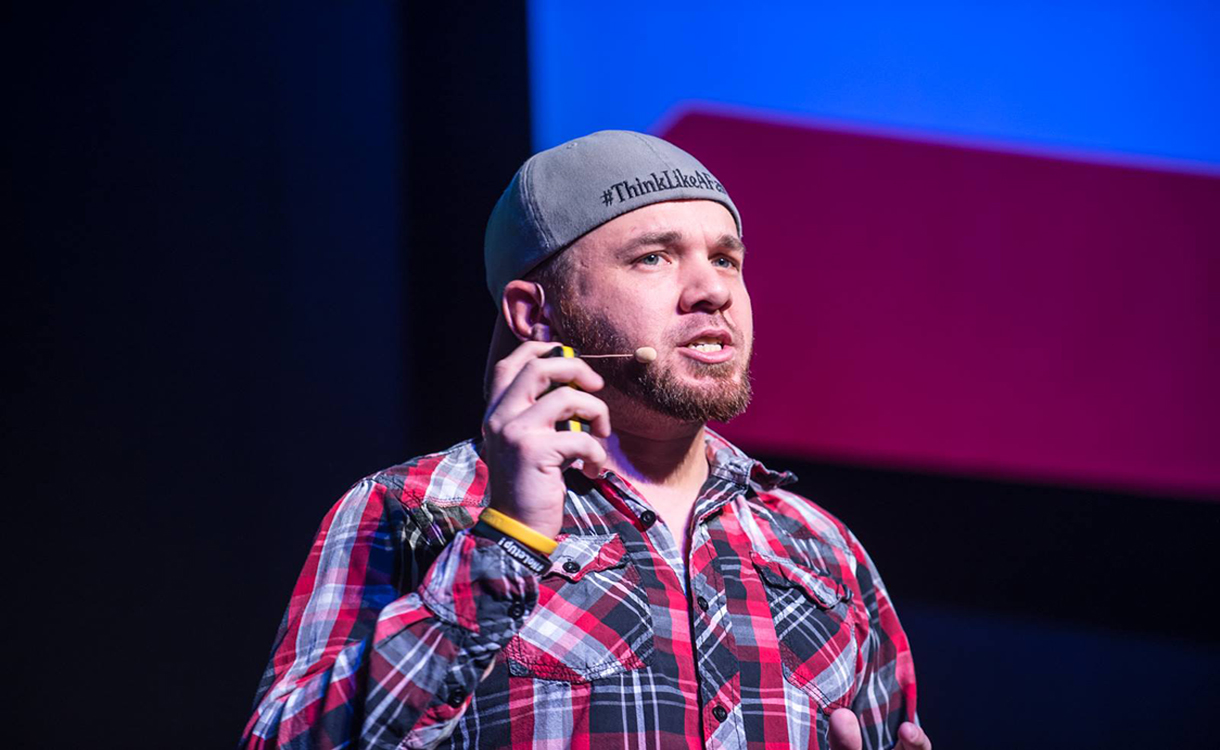 Marketer and solopreneur Brian Fanzo calls himself a “change evangelist,” a term that characterizes his passion for encouraging people to do new things—especially with social media. Fanzo uses platforms like Twitter, Snapchat and Flipboard to “connect great people with great people to do great things” and make personal connections. As a social media consultant, Fanzo sees networking, connectivity and consumer research as something to be taken seriously.

To understand how Fanzo does this while managing his own business, responding to everyone on Twitter and giving keynotes at the Pentagon, read on…

I’m curious about your background. Did you always know what you wanted to do?
Part of the reason that I introduce myself as a “change evangelist” has to do with my background. I went to school for sports broadcasting and journalism, and realized that I wasn’t great with grammar.

So I switched to computer science because I was always good with computers. Out of college I couldn’t get a job in tech, so I took a job at UPS as a seasonal driver, then went to work at a help desk in cybersecurity, which I never took a course in.

I ended up working for the Department of Defense doing tool implementation as well as social business implementation for nine years and grew a team of 32 employees all focused on deploying cyber-security software and helping different branches of the U.S. military work together.

At the height of my career, I decided to leave and go to a data center startup in Arizona focused on training and employee advocacy programs. I figured my passion was more in the teaching of collaboration and change than it was in the technology. We went from 250 to 615 employees in two years, and I became the “technology evangelist.” I was trying to create a synchronous conversation between our customers, employees and leadership.

The CEO eventually encouraged me to go out on my own, having done everything I could for them. It’s been three years since I started working for myself. As a millennial, I’ve already had four careers.

Speaking of millennials, cybersecurity and data centers aren’t exactly attracting people our age. What got your attention?
What I liked to do was debunk myths. The further the bar was lowered in those industries, the more I realized they needed help. I can credit a lot of my speaking career today because of those jobs. I spoke at the Pentagon to the Joint Chiefs of Staff [partly] because I was one of the only non-white haired people in cybersecurity who could talk to them [laughs].

If I was going into an internet startup, there would be a lot of people working toward the same thing. One of the things I love to do is help digital dinosaurs do what digital natives are doing, and I was able to there.

Public speaking and connecting big organizations are two difficult tasks. How did you become comfortable dealing with people?
My mom will say that I was born talking. In college I was good at computers and coding, but it wasn’t something I loved. I was also on the hockey team and in a fraternity, and I was one of the only people living in those different worlds. I was able to do all of these things as the youngest president of the fraternity because I was able to connect these people and these worlds together: one of my passions is connecting great people with great people to do great things. That’s one of my mantras.

My dad owned a successful candy company, and he always instilled the importance of a handshake and never burning bridges. It took me a long while to realize how to monetize that. In my first year as an entrepreneur I did a lot of “connecting” without making any money.

What’s one piece of advice you would have given yourself during that time?
I’m a disciple of Gary Vaynerchuk and his “jab, jab, jab, right hook” model about giving away free content and doing free shows and building relationships—but what I wish I would have known was that you have to give people something to buy into. Otherwise you build up an expectation of everything being free.

It took me an extra eight months to reset the boundaries between myself and my clients, and to say, “I’ve been jabbing for eight months and now I need to cash in.” Since then I’ve learned how to build a sales funnel.

Marketing experts like Vaynerchuk define value in specific ways. How do you define value? What are people getting from you that they can’t get elsewhere?
Oh, that’s a great one. I think it’s determined by your audience, not by the content creator. If you create a video no one sees and try to say it’s viral—well, it’s not.

At one point I had eight Twitter handles for each thing I liked—tech, sports fans, poker, social media, etc.—and I shrunk it down to four. I realized that maybe I wasn’t going to have the following of some of these other marketing/social media masters, but one thing I could do was out-engage all of them. I responded to every single @reply—anything more than a retweet is a message from me personally. That’s where I wanted to create value.

People constantly asked me things like, “How do I get on Gary Vaynerchuk’s radar?” So I created the hashtag #SoYouCare to say that “look, anyone can @reply or favorite or whatever. I want to go above and beyond.” If someone said they appreciated my content, I would go to their website or profile and reshare something from them directly so they could see I was going a couple steps beyond everyone else.

That sounds overwhelming. How do you avoid getting digital hangovers?
[laughs] It is! But I love it. I absolutely love the engagement aspect. It’s about finding balance. I’m always connected on my mobile device. Rather than read an article or play a game, I look at my @mentions. I don’t think it’s for everybody, and I do worry about scale.

What’s the importance of personalization in social media?
Technology has changed. We’ve started to forget the basic pieces—especially in the social media space—of basic communication. Nobody wakes up thinking about what their favorite brand is tweeting. We get mad when our organic reach doesn’t get anywhere.

And that’s because we forgot that the reason content was king was because people wanted us to answer their questions and service them. We started thinking that “content is king” means you have to post content all the time. I go to brands or companies and ask, “How often do you post on your blog?” and they’ll say, “Seven days a week.” And I’m thinking, do you really have such great information that needs to be seen at that rate? Doubtful.

I tweak my Buffer schedule every two weeks. There’s a place for automation not just for scale, but timing. My audience has grown internationally, and I use tools to share content that are optimal for, say, Australia.

One of the biggest lessons we’ll learn is that the more tech we have, the more we need to understand why and how it impacts us. If you’re automating and you have no sense of the type of content you’re sharing because you’re doing it so often, then…what are you doing?

So how does Flipboard play into your content marketing efforts?
Because I wasn’t in marketing at first, I struggled with figuring out what to share. I eventually realized that people wanted whatever resonated with me.

I was an early adopter of Zite because I didn’t like blogs, but I valued curation. I found that, thanks to Zite and Flipboard, I didn’t need to reinvent the wheel and write blogs. I could add my own comments or context to an existing article and “bucket” content for my readers in a helpful way.

Flipboard has allowed me to embrace the hodgepodge of my interests, be OK with posting an article about being a dad next to entrepreneurship next to social media next to the internet of things, and place them into specific magazines around that particular topic. It allows all the things I love to have a home. I haven’t needed to visit specific websites or blogs in years.

What advice would you give to anyone interested in replicating your career path?
Find your story. We all have an idea of what we want to do. But nobody gives a crap about what you do, we care why you do it and how it impacts all of us. Tell your story and be consistent.

The Medium Writer’s Guide to Flipboard

How Publishers Can Use Group Magazines to Engage Their Communities

Flipboard On The Web For Power Users: Notes, Comments, @Mentions and Notifications