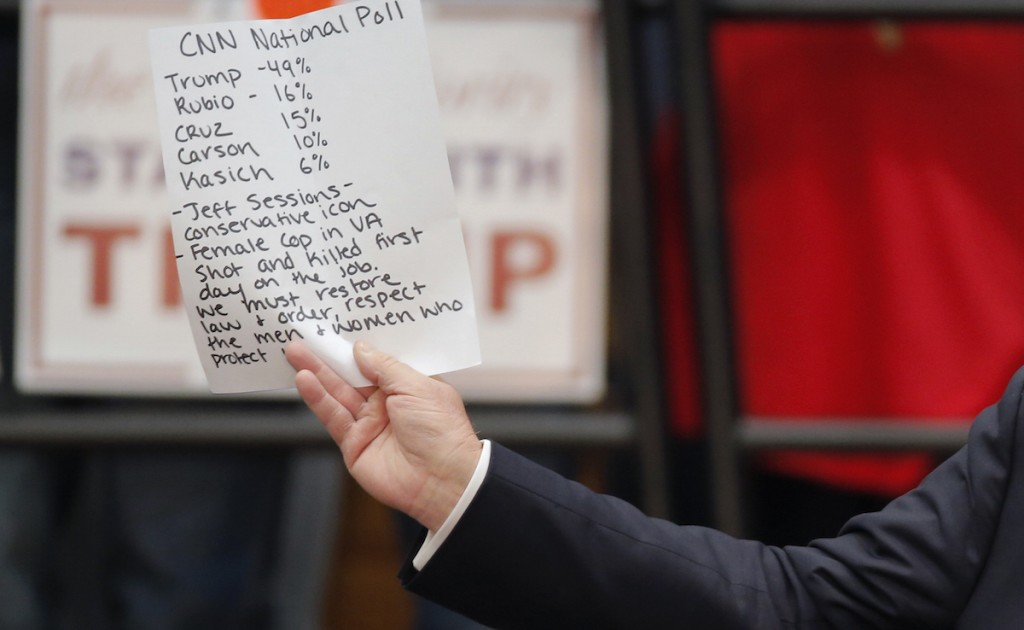 Donald Trump holds up handwritten notes as he speaks during a campaign event in Radford, Virginia February 29, 2016. REUTERS/Chris Keane

Super Tuesday is the biggest Election Day of the 2016 cycle thus far.

Voters in a dozen states (and one territory) will make their picks for the nominee of both parties, on a day that historically swings the election. Six hundred sixty one Republican and 865 Democratic delegates will be allocated. None of the states are winner-take-all, which means the delegates will be divided up depending on how much of the vote is won.

Frontrunner Donald Trump is leading significantly in the polls nationally and in most of the states set to vote this week. Former Secretary of State Hillary Clinton is in a similar position on the other side of the aisle.

Follow the night the 2016 race for the White House goes national through these Flipboard topics.

Donald Trump: Trump remains at the top of the GOP pack despite the controversy that seems to follow him. See if the most recent issue surrounding former Klu Klux Klan leader David Duke hurts him at the polls.

Marco Rubio: The Florida senator has upped his rhetoric and Trump attacks on the trail in an attempt to eclipse the businessman. Find out who comes out ahead after Tuesday.

Ted Cruz: Texas, the state Cruz represents, is one of the states voting this week. Will Cruz lead in his must-win home state?

Hillary Clinton: Clinton claimed a decisive win in South Carolina over the weekend. Follow her topic to see if her winning streak continues.

Bernie Sanders: Sanders has energized young voters and received large crowds across the coutnry. Can the Vermont senator translate that enthusiasm into wins?

Political Advertising: Ads are coming fast and often in early voting states. See what they’re doing to the ad business and industry.

Leadership: Who will lead best in the Oval Office is always a big topic of debate on the camapgin trail. Read more of the arguments.

International Relations: How the president will interact with world powers and leaders is key to the success of a presidency. Learn more about the dynamics our next president will face.

Satire: This year’s election has been at the center of comedy and late night shows of late. See who’s targeted most.

Dig deep on each of the candidates in Flipboard Magazines from The Washington Post and keep up with Tuesday’s votes in 2016 Election Central, our politics hub.