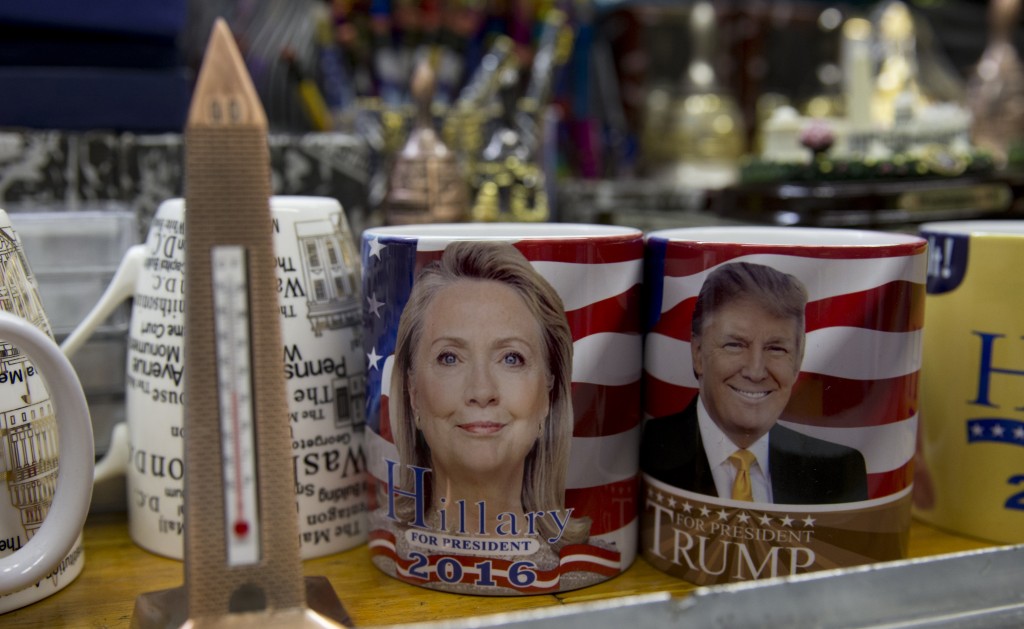 Coffee mugs for sale with the images of Hillary Clinton and Donald Trump sit side by side on a shelf of a souvenir stand at the corner of Constitution Avenue NW and 17th Street NW in Washington, Tuesday, Feb. 16, 2016. (AP Photo/Carolyn Kaster)

This unusual election season rolls into South Carolina and Nevada over the next week and a half, where the campaigns of two Democrats and six Republicans face their next tests on the road to the White House. The upcoming contests come on the heels of Supreme Court Justice Antonin Scalia’s death, which caused increased scrutiny over the types of judges the candidates would appoint, and polls showing a close Democratic race in Nevada and a strong Trump lead among Republicans in both states. We spoke with Washington Post political reporter and author of The Fix, Chris Cillizza, for his breakdown of what’s happening on the trail now and what’s to come.

How will the death of Justice Antonin Scalia and the impending fight over the Supreme Court appointment impact the White House race and the conversation on the campaign trail?
There’s two differing ways to think about it.

What is Donald Trump‘s path to the Republican nomination and his path to the White House?
It’s actually remarkably straightforward. If he wins South Carolina, as I expect he will, on Saturday, then he will move into the March 1 “SEC” primary as the favorite. The truth is that polling in virtually every state that votes between now and, well, the end of the nomination calendar shows Trump way ahead. Until he starts losing primaries and caucuses where he’s expected to win, I don’t see that changing.

As for getting to the White House, that’s harder to see. Trump claims he can bring lots and lots of new voters to the process. Maybe. (I am not in the habit of ruling anything out as it relates to Trump these days.) But, if he can’t fundamentally alter the electorate, it’s hard to see his positions getting him to 270 electoral votes. Of course, I never thought he would get as far as he has.

Who poses the greatest threat to Trump’s dominance in the field?
Probably Ted Cruz since they are both swimming in similar waters. Cruz and Trump played nice for months, but that “friendship” has faded as it’s become increasingly clear to both of them that they share too much voter space to simply ignore one another. In the runup to the South Carolina primary, Cruz is trying to paint Trump as a phony conservative who is a great entertainer but doesn’t really have any deeply-held beliefs. Trump, in turn, insists Cruz has no friends and is a “liar.”

What are the similarities and difference between the challenge Clinton faced by Obama in 2008 and the challenge she faces this cycle from Sanders?
In both races, she was cast as the status quo, a cautious standard-bearer of the way things are. And, in both races, she has been forced to occupy the center—or at least closer to the center—of the party, ideologically speaking, while her opponent has been able to cast himself as the hero to the liberal left.

That said, Bernie isn’t Barack. Sanders lacks—at least according to all the polling I’ve seen to date—the appeal among black and, to a lesser extent, Hispanic voters that was at the core of Obama’s winning formula. If African-American voters doomed Clinton’s chances in 2008, they may well save her in this race.

What policy issues will most impact presidential voting among Republicans and Democrats this year?
One of the great myths is that policy plays a major role in presidential elections. It can—particularly for single issue voters—but for loose partisans and the truly unaffiliated policy stuff takes a back seat to personalities. Usually people make up their minds about who to vote for on the general sense of who they like/who is looking out for them/who understands them. That can be informed by policy but it’s usually more of a heart than a head choice.

Are we headed toward a brokered convention on either or both sides of the aisle?
I think Republicans are more likely to go into their convention in Cleveland in mid-July without anyone having enough delegates to be the nominee than are Democrats. I see no reason why Donald Trump would get out of the race before the convention if he a) had a decent number of delegates and b) no one else had crested the magic number to be the nominee. Ditto Ted Cruz. And, if those two are pushing the race to a convention you can be damn sure that the establishment will make sure one of their candidates—most likely Marco Rubio—is in that mix, too.

Does the voter anger this year mirror the mood of the electorate in any previous cycle? What year is this most like and why?
Well, the discontent with everything and everyone—both domestically and in terms of foreign policy—feels most like 1992, although I think the frustration/anger is worse today than it was back then. Remember that before he strangely ended his candidacy (and then got back into the race) Ross Perot, as a third party candidate, was leading in the polls.

Does that mean Michael Bloomberg is going to be president? I don’t think so. But it does mean there is a big opening for candidates who can effectively channel the anger of the electorate. That explains, kind of, why Donald Trump and Bernie Sanders are where they are.

What has most surprised you during this election cycle?
Donald J. Trump. His transformation from being totally known and broadly disliked within the GOP to being totally known and generally liked within the party is one of the most remarkable things I have ever seen. It goes against everything I ever thought I knew about politics. And yet, here we are.

What five adjectives would you use to describe the state of the race now?
Unpredictable. Exciting. Bizarre. Unique. Did I already say “unpredictable”?

Keep up with all of the presidential candidates through The Washington Posts’s Flipboard Magazines and stay up with the ever-interesting race for the White House in our political hub, Election Central.

~GabyS is reading 2016 Election: The Ads