5 Topics for Presidential Debate No. 2 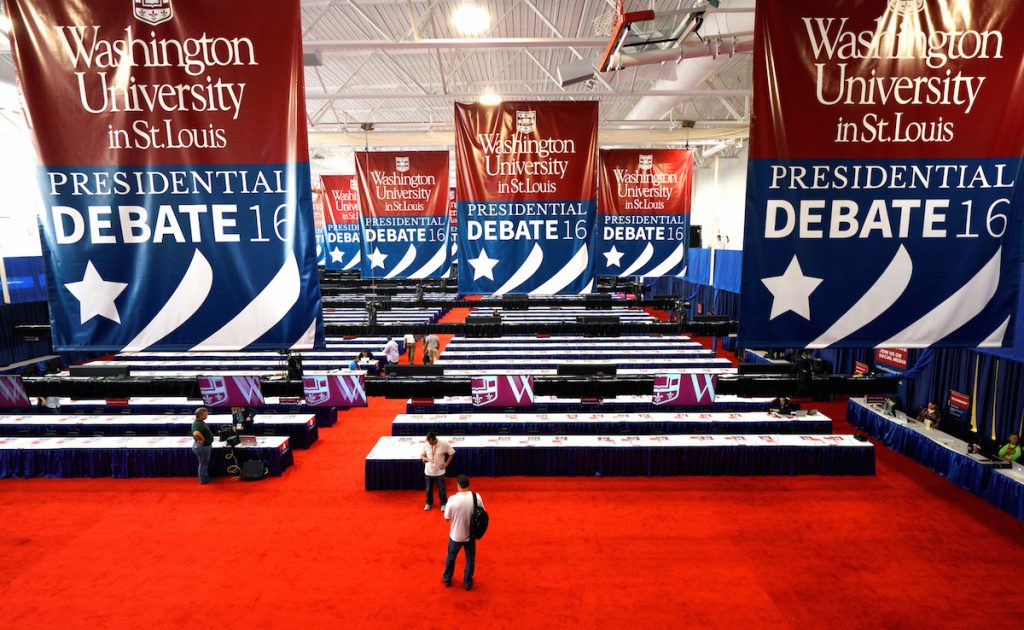 Debate No. 2 will pit Democratic presidential nominee Hillary Clinton against Republican presidential nominee Donald Trump for the second time this election cycle. The event Sunday at Washington University in St. Louis will be in a town hall format, with half of the questions coming from audience members and the other half from ABC’s Martha Raddatz and CNN’s Anderson Cooper.

Clinton enters this event looking to continue the bump she received after her first debate and perhaps do a bit of cleanup after her vice presidential nominee, Tim Kaine, delivered a widely criticized performance at the VP debate.

Clinton has largely been off the campaign trail this week while focusing on prep with close aides. She has defended her decision to concentrate on the event, saying “You know what else I prepared for?…I prepared to be president.”

Trump will likely aim to improve on his performance in the first debate, which contributed to a dip in his poll numbers. It will also be the first time he faces questions about a Friday report with audio of him describing women in lewd terms in 2005. He since apologized for the remarks that received criticism from Republican officials, leaders and politicians.

Trump kept up a heavy campaign schedule for much of the week, including a town hall event Thursday night in New Hampshire. The atypical event for him appeared to be a rehearsal for Sunday night, though he insisted he didn’t need “prep.”

Get ready for Sunday’s 90-minute event with our 2016 Presidential Debates magazine and check out the following five topics for more on the players and topics.

Hillary Clinton: Clinton has left most of the campaigning this week to her high profile surrogates, including Bill Clinton and Michelle Obama. Barack Obama and Al Gore will also stump for her in the coming days. But on Sunday, all eyes will be on the former first lady, senator and secretary of state.

Donald Trump: Trump will walk on stage with pressure from Republicans across the country in tight races, many of whom have called for him to step aside. How will his answers Sunday impact his campaign going forward?

Real Estate: Trump made a name for himself in New York real estate, but his business reputation has been called into question through consistent stories about his practices. Follow the latest on his dealings, which may come up in their second debate.

Hurricanes: The debate will follow days of extreme weather caused by Hurricane Matthew. See if or how climate and infrastructure issues are raised Sunday.

Foreign Policy: Co-moderator Raddatz specializes in international affairs. Read about the biggest issues on the world stage before the candidates are likely questioned by her on their policies and readiness to be commander in chief.

Follow Election Central for all of your 2016 campaign news.