5 Topics for Presidential Debate No. 3 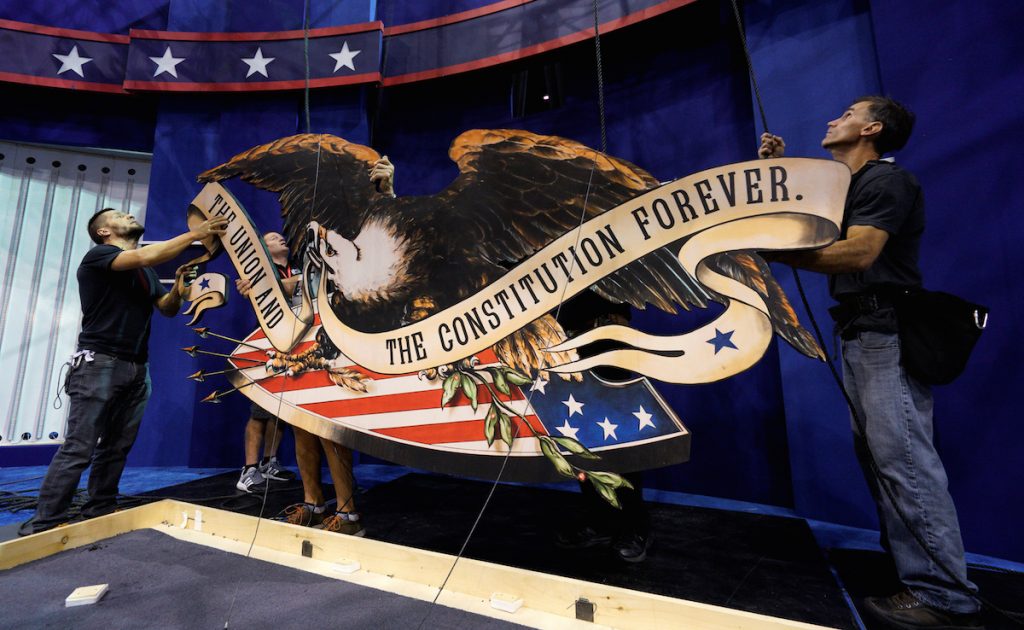 Workers install the eagle above the set for the last 2016 U.S. presidential debate in Las Vegas October 17, 2016. REUTERS/Rick Wilking

Democratic presidential nominee Hillary Clinton and Republican presidential nominee Donald Trump will meet on stage for the third and final time Wednesday night. The debate comes amid heightened rhetoric on the campaign trail and follows a bruising week for both candidates.

On the Democratic side, WikiLeaks has steadily released emails from within the Clinton campaign exposing controversial correspondence. And documents released Monday also showed a top State Department official tried to have the FBI back down on classifying the contents of an email from Clinton’s private server. On the Republican side, multiple women came forward to accuse Trump of unwanted sexaul advances. During campaign appearances, he continued to warn of a “rigged election” and voter fraud, unsubstantiated claims that Republicans and the Clinton campaign spoke out against.

The language used at recent Trump rallies in particular has encouraged violence, with his supporters often loudly and angrily criticizing the media. The Washington Post‘s Jenna Johnson has covered the Trump campaign for over a year. She said his public tone changed after the last debate when he vowed to throw everything he could at Clinton. She described the current state of the race as “nasty” and “polarized.”

“So many Americans feel like they have been left behind by the government. They are tired of politicians and feel like others are getting ahead while they are stuck,” Johnson told us. “Trump saw this anger and played to it.”

Clinton has pulled ahead in national polls—especially among women—but the candidates remain close in some battleground state polling. With early and absentee voting already underway, Wednesday’s event is expected to be the most high-profile meeting before Election Day.

The 90-minute Chris Wallace-moderated event at the University of Nevada in Las Vegas will focus on six topics: immigration, entitlements and debt, the Supreme Court, the economy, foreign policy and each candidate’s readiness to serve as commander in chief.

Follow the biggest moments with our debate coverage in 2016 Election Central and continue reading with these five topics.

Foreign Policy: On Monday, Iraqi forces and their allies began the fight to retake Mosul, Iraq, from ISIS control. The developments in Iraq followed ongoing developments in Yemen. See how these issues are raised with the candidates and how they could respond to the global threats.

Women’s Rights: It is likely women’s rights are addressed Wednesday in light of the recent Trump accusations and the renewed spotlight on the accusations made about Bill Clinton. Follow the biggest issues facing women around the world.

Melania Trump: For the first time since the release of the leaked tape, Mrs. Trump spoke out in support of her husband Monday night and said her husband’s accusers were lying. Read and watch her latest comments before she appears at the next debate.

Bill Clinton: The former president is considered an asset on the trail and with Democratic voters, despite the recent attention on his controversial past. Will the 42nd president become a topic this week?

2016 Election: The Ads: Less than one month until Election Day, the ad wars are heating up. See the latest spots from both candidates that are airing throughout the country.

~GabyS is following races across the country