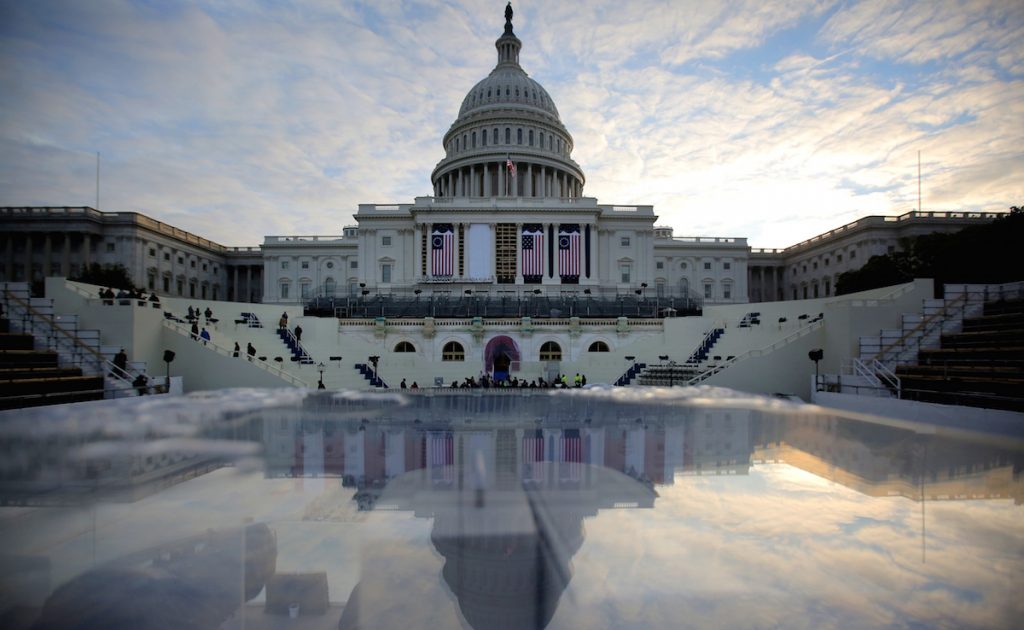 The U.S. Capitol is seen during a rehearsal for the inauguration ceremony of President-elect Donald Trump in Washington. REUTERS/Carlos Barria

Donald Trump will become the 45th president of the United States Friday, when he takes the oath of office administered by Chief Justice John Roberts overlooking thousands on the National Mall in Washington, D.C.

The presidential oath of office is a constitutionally required 35 words that Trump will say while raising his right hand. He will use his family Bible and the Bible used during Lincoln’s first inaugural. The vice presidential oath of office, taken by Mike Pence, will be administered by Associate Justice Clarence Thomas with a Bible previously used by former President Ronald Reagan.

Trump will then deliver his inaugural address, followed by readings and the national anthem. A parade will ensue along Pennsylvania Avenue between the Capitol and the White House. The parade lineup includes high school bands, police troops, civic groups and representation from different military branches. Performances by Three Doors Down, Toby Keith, some of the Rockettes, the Mormon Tabernacle Choir, and “America’s Got Talent” runner-up Jackie Evancho are also expected throughout the inaugural festivities.

The day of pomp, performances and speeches officially ends the eight-year presidency of Barack Obama and ushers in the White House of Donald Trump. Peaceful transfer of power is a hallmark of American democracy, exemplified by the former officials expected to attend Friday’s events. The Obamas, former President Jimmy Carter, former President George W. Bush, former Vice President Dick Cheney, former President Bill Clinton, and former 2016 presidential nominee Hillary Clinton will be in attendance. However, some Democratic elected officials have decided not to attend as a statement against the incoming commander in chief.

Peaceful protest is also a hallmark of American democracy. The Women’s March on Washington, scheduled for Saturday, is predicted to draw 200,000 people. Additional rallies are planned across the country and around the world. An estimated 1 million people plan to demonstrate in all 50 states and abroad in 32 countries.

Inauguration day will end with the inaugural balls, three of which Trump is expected to attend, fewer than previous incoming presidents.

Track all of the inaugural activities and the confirmation hearings, legislation and news that will follow as the Trump administration assumes control in Washington.

Transition, Inauguration & The First 100 Days: Your one-stop destination for news throughout all of the inaugural events, from the swearing-ins and rallies to the parties, curated by the Flipboard Newsdesk.

Donald Trump: Stay informed about the man who will soon become commander in chief.

Mike Pence: The former congressman and governor has led the transition efforts and will now himself transition into the White House to help usher Trump’s policies. Track his involvement.

U.S. Congress: Capitol Hill will remain in the news as cabinet confirmation hearings and votes continue, and then with the legislation expected to be debated over the next many months. Follow the players and policies.

Health Care: Repealing and replacing Obamacare is high on the priority list for the Trump administration and the Republican-controlled Congress. See how those efforts progress and what that means for your health coverage.

~GabyS is reading about the Trump family, including Ivanka Trump and Jared Kushner