Behind the Story: Behind the Scenes at the NFL Draft with Rolling Stone 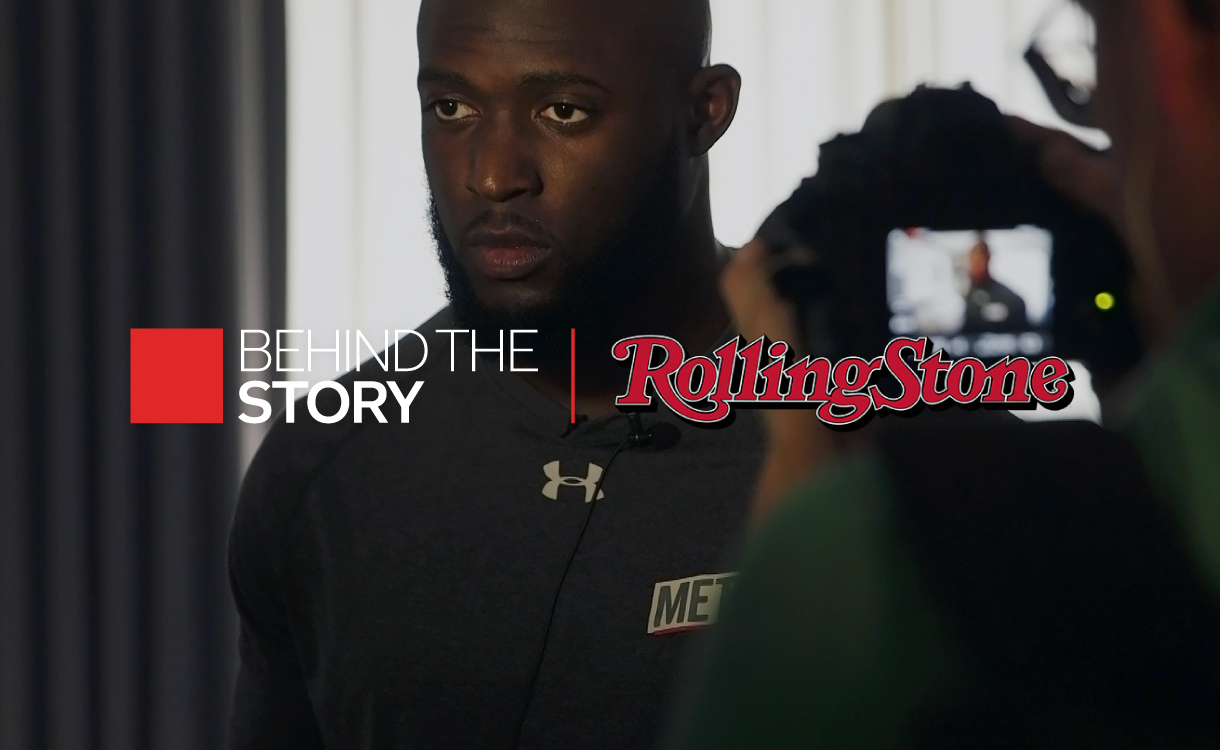 The NFL draft, that heavily-anticipated lottery of college football players who starred on Saturdays and will now be playing on Sundays, has become one of the most discussed events of the spring. Beginning the day after the bowl games in January, sports columnists rate, review and revile the next wave of football stars about to enter the NFL. Rolling Stone magazine dove into this night of hopes and dreams by gaining access to the best running back in the draft, Leonard Fournette of Louisiana State University (LSU).

Sports Editor Jason Diamond spent several days with Fournette leading up to, and on the day of, the draft in Philadelphia last month.

We sat down with Diamond and got a sense of the frantic and unpredictable nature of the draft, and learned that Fournette has a bright future with the Jacksonville Jaguars.

How does writing about sports at Rolling Stone differ from traditional sports writing?

I come at it as a sports fan first because I’ve been obsessed with sports my entire life. I try to find the kind of stories that obsessive fans might be into that aren’t your typical Bleacher Report or ESPN stories, like trades or whatnot.

I try to look at sports from a cultural angle whether it be basketball or motocross, tennis or hockey. What’s the bigger story here, what’s the cultural angle here. Sports tells us so much more than just a couple guys on a field, on a court, on a rink, passing a puck or ball around.  There is so much more to it. There’s the bigger business story to race to class to gender. There’s also how sports interacts with other forms of entertainment, which is obviously a big thing for Rolling Stone because we deal with a lot of pop culture, music, etc. So I look at those kinds of factors to help decide whether the story ends up on the site.

What made you choose Leonard Fournette as the player to hang with during the NFL draft? How many other players turned you down?

Actually, he was my first choice. I’m lucky that I know people who know people. I asked the right person who said Leonard wasn’t doing a lot of press leading up to the draft, but he was really into the idea. People always say that Rolling Stone isn’t a traditional sports outlet, and that’s what makes it really attractive to people. We are looking to talk about these teams, athletes and sports and what they mean in the bigger picture. I told the person who got me to Leonard that I wanted to observe his day. It got back to Leonard and he loved the idea.

I grew up a Chicago Bears fan; as a kid, defense was, like, religion. You wanted to watch defensive, smashmouth football. When you have this terrifying legacy of the Monsters of the Midway defense, the only really fun competition growing up was when there was a smashmouth, hard-nosed running back going up against that. It was that one guy trying to break through this defense. I saw Leonard run a bunch of times at LSU, and I thought, “That’s old school, that’s Bo Jackson, that’s Herschel Walker, the kind of guy you don’t see all that often.” I was immediately interested in him.

Leonard is from Louisiana and played at LSU. Was he hoping the Saints, who needed a running back before signing all-pro Adrian Peterson, would select him?

That’s what I found interesting. That was one of the first questions I asked his people; did he grow up a Saints fan? LSU was probably his first team [to root for] growing up. In the South, a lot of times, the college teams are way more popular than the professional teams. They said no, he wanted to go to LSU, and they couldn’t find any pictures of him wearing Saints gear in the 90s.

Was there another team he preferred as he walked into the draft?

I didn’t get that from him. I said in the piece, he has always been ‘The Guy.’ I think when you are that kind of athlete, you go where you go. You are of the mind that you are going to succeed wherever you go. I really think he could have cared less. Sure there could have been a bigger market; he could have gone to the Jets or the Niners or the Bears, but in his mind he was going to succeed wherever he was going to go. And that’s the kind of player you want on any team.

So there was no disappointment about being drafted by the lowly Jaguars?

That’s the other thing about Leonard; he’s a very mature guy, he’s got two kids, he’s got a good head on his shoulders. I asked his friends, “Are you going to go party after the draft?” One of his guys said, “No, Leonard’s not really into that. He wants to hang out with his family.” I said, “Wow, that’s cool.”

Can you talk about the frantic nature of draft day?

Leonard was keeping cool about the entire thing. They were rushing him around, one thing after another, talking with one of the ESPN guys, another guy here, another person there. I’ve seen the draft in New York; it’s New York—everything is fast and rushed even if it isn’t the NFL draft. Philly is still a big city but you’re not expecting this huge mass of people, like all over the place. You’re seeing hundreds of different jerseys at any moment. There’s this feeling in the air, first from the fans, all about the anticipation, you can totally get that. You’re watching fans talking about whom they are going to get. Then there’s being in the hotel rooms; it’s rushing around, seeing all these people with the lanyards around their neck (media credentials) just scurrying from one room to another, cell phones in hand. It’s a pretty funny scene. It’s kind of a shit show. I’m sure data on the phones is being chomped up. It’s hectic. You’re leading up to hundreds of guys going into the NFL, trying to make endorsement deals, trying to figure out who’s going to go where and how they should plan accordingly. Then you have someone like Mitch Trubisky, drafted by the Bears and throwing everything out of order. I couldn’t even imagine all the preparations going into a day and then having something like that happening and then it’s like, oh shoot, the whole landscape is thrown off. That’s what you have to prepare for, that’s what that whole day is.

As a Bears fan, did the drafting of Trubisky shake you up?

It absolutely blew my mind. Bear fans were stunned. As for the story, I didn’t think the Bears had any interest in Leonard so it didn’t change much. I still just don’t know why the Bears did it. If you are going to get a guy to teach, why don’t you just stay with Jay Cutler at that point? Now they have three quarterbacks. I don’t understand why they did any of it. It’s going to be a weird season there.

After the Trubisky surprise, was there any trepidation in Leonard’s head that he might slip down the board or get traded?

I wasn’t around him at that point but I was talking to his publicist and his publicist was still feeling pretty good that Leonard was going fourth. Everyone knew which teams needed Leonard going in. I think if he had fallen down in the draft, he would have still been the best running back picked. It’s a confidence thing. I keep going back to that. You can’t teach that. It’s something they have or they don’t.

We read about young stars coming out of college and receiving massive contracts only to hear later that they squandered much, if not all, of their fortune on friends and family who came out of the woodwork. Did you guys discuss this?

He had his whole family there and what I find interesting is that he has his two or three good friends, whom he’s known since he was a kid, and they sort of act as his trustees. And I see that as a new, emerging thing in sports; Lebron has made that a more attractive option than signing some big name finance guy in New York City to take care of your money, some guy you don’t trust or know. I mentioned that to him, and his reaction was, you trust family and you trust the people you’ve known your whole life before anybody else.

When you’re walking around and seeing guys who are going in the second round surrounded by all these people, like rock stars, and Leonard has this sparse team of a couple of people that are close to him, you kind of realize that this guy is going to work slowly with what he’s got.

What was your approach going into the piece and did you accomplish what you set out to do?

Given that he went to the team everyone expected, did you find a lack of drama that night?

I don’t know how I would have handled it (being skipped and falling down the board). That would have been pretty intense. But sports is all about drama. Sure, that would have been a little bit sexier. But I really like the idea that he’s this guy who looks like he has a good head on his shoulders. He’s a family man, wants to stay close to home, and throughout the day I was thinking I really hope things work out for this guy. And for now they are and that’s nice.

Do you think you might revisit Leonard for a future story, or at least keep track of him during the season?

That would be fun, for sure. Speaking as a football fan, he’s the kind of guy I would like to see play. I want to see something good come out of his career. I’ve never been a fan of the Jaguars. I like college football, and they are like the fourth team in Florida, but now I’m going to watch them for this one guy. That’s the funny thing about sports. I would have never thought in a million years I’d care about the Jacksonville Jaguars. But now I’m going to pay attention on Sundays.

Follow The Sports Desk on Flipboard to read Rolling Stone’s coverage of players and games.

~SteveF is curating @thesportsdesk and spends way too much time watching games.