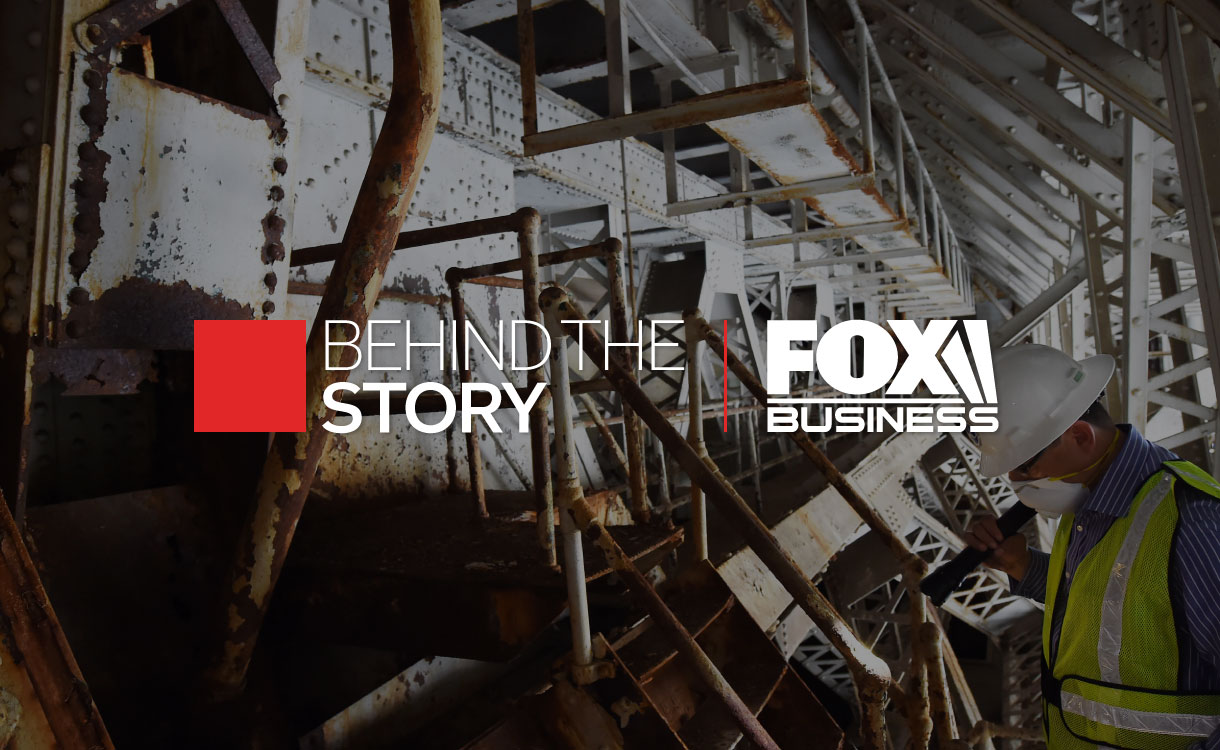 Watch your step—America is crumbling. From highways to runways, many of the country’s public infrastructures badly need repairs. In 2013, the American Society of Civil Engineers assessed the situation and issued a disappointing grade: D+.

Throwing money at the problem might help—lots and lots of money in a very short amount of time, that is. According to the same report by the ASCE, it would take $3.6 trillion over the next four years to fix thousands of roads, railways, public facilities (including schools), waterways, and bridges, many of which are over one hundred years old and definitely not designed to handle the demands of the 21st century.

How did we get into this mess? Is there hope for the future? Looking for answers, Fox Business investigated the nation’s failing public works projects in its new series, Upgrading America. For the back story, we talked to the writer, Jade Scipioni.

What are the biggest challenges facing America’s infrastructure? How did we get to this point?
Late last year, Congress passed the first transportation bill in about a decade. So basically, federal funding for improvements had been stagnant. There has been very little upgrading, which is the main reason we did this series. We need to improve all areas of infrastructure from our roads, subways and airports.

What’s the future of transportation? What’s the country doing to improve public transportation and reduce widespread traffic problems?
I ride the subway in NYC every day so I know how badly we’re behind. Our subways are over 112 years old and are more congested than ever. The most alarming fact that I found out is that in 2050, nearly two-thirds of world’s population will be in urban areas—so it’s go-time to improve our subways.

The MTA and New York Governor Andrew Cuomo are trying to act quickly because they know they have a lot of catching up to do. While my repeated requests to speak with the President of the MTA, Tom Prendergast, were not answered, I got a lot of my information from a press conference held in January at the New York Transit Museum. This is where Prendergast and Cuomo outlined their $140 billion budget to get NYC’s subways into the 21st century. And they want to act quickly. By 2018, you will start to see some of these changes, like using your smartphone to pay for your ride instead of buying metro cards.

What’s the aviation industry and government doing to improve airports?
The primary source of funding for airport upgrades is the passenger facility charge, a charge levied by the FAA and applied to consumers via ticket prices. However, that charge has not been adjusted for inflation since it was set 15-20 years ago. In 2015, the airports battled with airlines on raising the passenger facility charge. Airports said a higher fee would allow them to raise more money for infrastructure expenditures, while the airlines said that passengers already pay enough fees.

Airlines often participate in airport upgrades by providing funding and design input to improve the passenger experience. For example, JetBlue partnered with JFK in the airport’s latest renovations to create a state-of-the-art terminal.

But it can’t be all doom and gloom, right? What are some success stories?
Where there is some progress, the MTA and NYC Gov. Cuomo have invested $140 billion for improvements which should kick in by 2018 and will hopefully finish by 2020.

Also with Amtrak, the U.S. commuter rail, the government has mandated the usage of PTC, or Positive Train Control, which is a technology that can prevent a train from going too fast and potentially derailing. Amtrak’s CEO talked at great length about PTC while testifying before congress following the deadly crash last year outside of Philadelphia. Unfortunately, PTC is behind schedule—the deadline to have it implemented was the end of 2015—and that has been extended.

Also, do you ever take the Tappan Zee Bridge? Well, Cuomo got funding to re-do that, too. It’s a $4 billion project that will allow the bridge to carry more trips than it was originally built for. Plus, it will create many jobs for New York state.

Who’s leading the infrastructure battle in the political arena?
Still lots of uncertainty here—that’s why we did the series. Last year Congress passed a five-year, $305 billion transportation bill, the first in about a decade. But that was less than the White House was pushing for. As for the candidates on the campaign trail, Hillary Clinton has a fairly detailed plan, and GOP-ers like Chris Christie have talked about the need to improve infrastructure. But at this early stage, these are merely “ideas,” not plans that can be enacted.

In what ways is technology either helping or hurting such infrastructure?
I only see technology helping infrastructure in regards to subway upgrades. Wi-fi abilities will help us get a better sense of train delays and help with security issues. The ability to use your mobile device instead of a MetroCard will be huge in tracking who’s riding and at exactly what time.