Behind the Story: Lucky Peach on the History of Pho 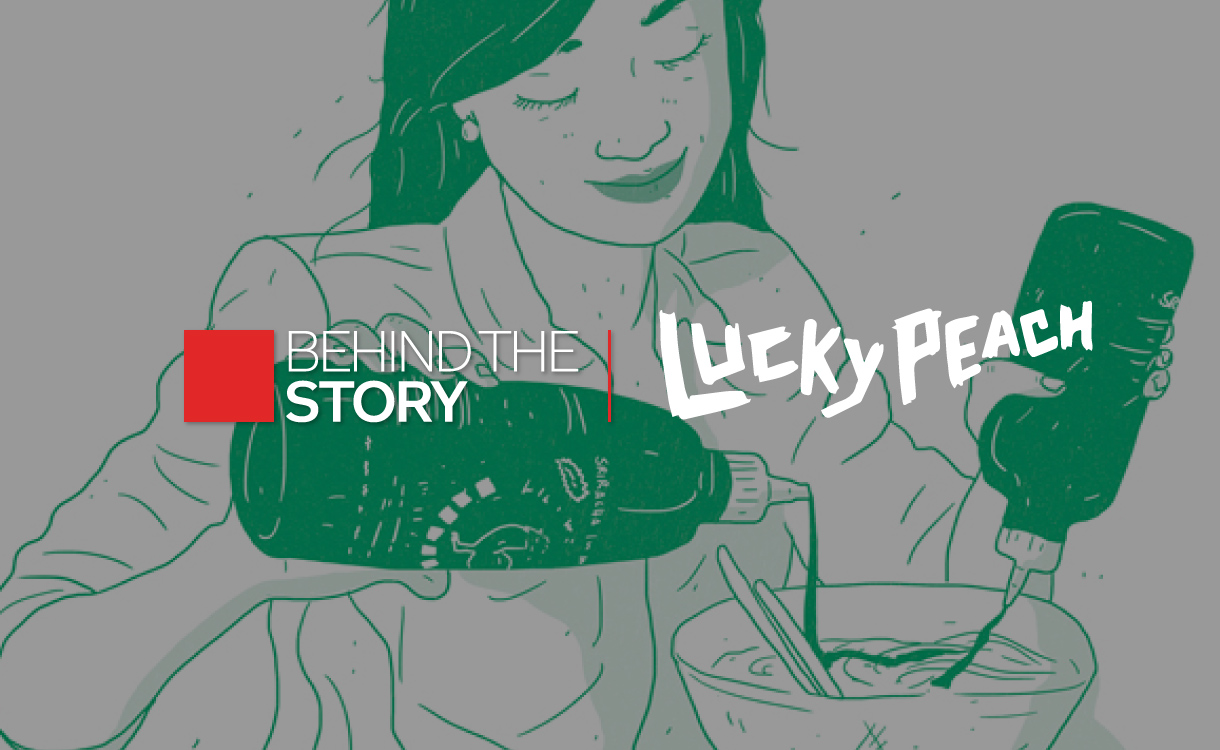 At first sniff it’s a deceptively simple dish: noodles, broth, protein—some people might be excused for confusing it with soup. Though its ingredients are few—seasoned beef or chicken broth, rice noodles, a combination of tenderized meats and accompanying accoutrements like lime, bean sprouts, basil leaves and sliced jalapeños—pho is rich, complex and, for the likes of Anthony Bourdain, even a sensuous meal which evokes the politics and history of 20th-century Vietnam.

Walking us through pho’s wonderfully complicated story is Lucky Peach’s Andrea Nguyen, a James Beard-award nominated food writer whose piece, “The History of Pho,” appears in the June 2016 issue of Lucky Peach. Read it and eat:

Besides being tasty, pho has manifold significance for Vietnamese people. Can you touch on some of what pho represents?
When you’re slurping pho, you’re eating Vietnam’s complicated history. The noodle soup was likely influenced by Chinese foodways, made from beef scraps that the French colonials didn’t want, and concocted by industrious Vietnamese and Chinese street hawkers. No one can claim pho but the Vietnamese. It happened on Viet soil under a unique set of circumstances. For that reason, it’s become a symbol of national pride and self-determination. It’s been part of protest poems, communist economic reform policies and espionage. It’s a comfort food that nourishes Vietnam in many ways.

What makes for a really delicious bowl of pho?
Pho is different for each person. For me, a good bowl of beef pho has a nuanced broth that’s savory-sweet and spice notes that delicately dance. The noodles are springy and the beef is slightly chewy with some fat and lean (I love brisket pho!). When the bowl is set at the table, I like to smell a slight rawness that comes from the garnish of sliced onion, green onion and cilantro. After I empty the bowl, a little fatty broth savor lingers on my lips.

How did mass immigration from Vietnam to America change the dish?
With all the refugees fleeing Saigon in the initial waves of the 1960s, southern Vietnamese “Saigon-style” pho prevailed in expat communities abroad. That is, most of the restaurant pho broths leaned toward the sweet-savory side. With America’s wealth of ingredients and people’s generous appetites, bowls got bigger (a small or regular bowl in the U.S. is a medium-large bowl in the Motherland). And, things got fancied up with all the meat cut options. It can be dizzying. In Vietnam, you usually don’t get a bunch of meat cut options when ordering beef pho. Menus are simple to figure out.

You mention the distinction between northern and southern versions of pho, which reminds me of similarly pronounced regional culinary variations in countries like Italy, India or Thailand. In those places there’s something faintly political about the distinction. Is that true in Vietnam? What are some regional characteristics of pho in Vietnam?
Totally. Like in other parts of the world, there’s a north versus south tension in Vietnam. Pho was birthed in the northern region around Hanoi, the capital of the country. Northern Viet culture tends to be more conservative and traditional. The food emphasizes a purity and simplicity of flavors. The south—we’re talking the area centered around Saigon (also known as Ho Chi Minh City)—is where people love to live large. It’s agriculturally and economically richer, politically and socially more progressive.

The fact that southern, Saigon-style pho is served with bean sprouts and a bunch of herbs disturbs hardcore northerners. One Hanoian I interviewed for the book said that he couldn’t stand all the vegetables and ‘foreign’ herbs that southerners put into their sweet-flavored broth. Southerners love to say that northern pho is bland and portions are scrawny.

One of your parents remarked that pho isn’t something you can eat every day. Why not?
My mom said that. She’s turning 82 this month. She said you would get bored if you ate pho daily but with rice, there are countless ways to prepare it so you would never get bored. She’s a woman who served rice even if we were having spaghetti for dinner. (Spaghetti was an exotic rarity for our family so she likely wanted a familiar backup food.)

What do you make of the popularity of Asian food? How do you feel about culinary appropriation?
Asian food has been trendy in the past but the difference today is this: there are more Asian people at the table and in the kitchen who can articulate what their food is about. They do not need an interpreter or interlocutor to help translate their food for a broad audience. They can speak for themselves and may choose to give nods to their ancestors as well as their hyphenated, global food identities.

I was born in Vietnam but that does not give me a pass in the eyes of Viet people. I’ve lived most of my life in America so I’m a Viet Kieu, overseas Vietnamese. In Vietnam, I’m not perceived as being fully Vietnamese. Given that, when my work is about Vietnamese food, such as an iconic classic like pho, I need to do it justice, particularly when I’m doing research in-country.

I have to earn local people’s respect, which means I do lots of advance homework and brush up on my Vietnamese. If I had interviewed my cousins and others in Vietnam about pho in an uninformed, half-assed manner, I wouldn’t have been taken seriously and would have risked being seen as shallow and inept. They may have dismissed me as someone who returns to the Motherland to cherry-pick information and repackage it for foreigners. If I had done that, that may be taken as cultural appropriation on an intra-ethnic level.

The easiest and most political position to take on culinary appropriation is to say that someone like chef/author/Thai food connoisseur Andy Ricker is guilty of it by virtue of his non-Thai heritage. But he speaks Thai and is faithful to the cuisine in ways that many Thai restaurants are not. He’s not kitschy in his approach to conveying the spirit of Thai foodways. Andy is not a cultural appropriator.

What I’m wary of are non-Vietnamese people who drop in for a quick tour of the country, and as if by divine intervention, they return home with the ability to present ‘authentic’ Vietnamese food. If their endeavor involves Mandarin collars and conical hats, it would be a extra red flag.

On the other hand, just because you’re Viet does not mean you can make Viet food well. If a non-Viet person tackles and masters pho, that’s not culinary appropriation. It’s just diversifying the pho kitchen and table.

In the piece you spoke a bit about how pho is evolving. Describe some of the newer, more nontraditional forms.
I’ve tried fancied up pho like lobster pho, filet mignon pho and sous vide beef pho. The lobster one was about $35 dollars and boiled down to a lobster cooked in beef pho broth. It arrived in a casserole dish so the lobster could be arranged in a glorious manner. I was not impressed. There was little synergy and it didn’t say, “I am pho” or “I am lobster.”

Filet mignon is relatively inexpensive at Viet markets and a number of pho shops offer it as an upscale add-on. Sometimes they pound on the meat with the back of a cleaver like cooks would in Vietnam but the beef here is very tender so that’s unnecessary. I don’t care for filet mignon pho because it doesn’t have beefy taste to compliment the broth well. Sous vide filet mignon pho was overly refined for me. It was novel but lacked the verve that makes pho what it is. I try these nontraditional versions because I’m eternally curious and optimistic. You never know when something will hit just right and I always learn something.

What does pho mean to you personally?
Pho started out as a favorite childhood food. I was chubby in a developing country. After my family fled Vietnam and resettled in America, it was among our efforts to maintain our identity. My family left with two small suitcases and were lucky to leave by plane before things fell apart in April 1975.

It was nevertheless challenging. My parents were both in their 40s with five kids and had to build a new life in California. There were many cultural adjustments and for stability, they relied upon food and language. We spoke Vietnamese at home and ate rice every night with our traditional Viet meal of a quick soup, meat dish and vegetable dish. On the weekends, my mom made more complicated things like pho. We formed an assembly line to make the bowls. As a family, we gently critiqued the pho. Was the broth too sweet that day? Did the noodles get overcooked?

My mom shared pho intel with other Viet expats and put that communal knowledge into her pot. Similarly, I practice that approach nowadays and encourage others to do the same. Along with symbolizing heritage, pho has also become about good cooking and sharing.

People expect “ethnic” food to be cheap. How do you feel about that?
It’s awful. With regard to Vietnamese food, part of the problem is Viet people have come to expect their food to be cheap. I remember the 1980s banh mi price wars in Orange County, California’s Little Saigon: 2 for 1, buy 4 get 2 free, $1 banh mi! We bought grocery bags full of banh mi and I quickly realized the Vietnamese phrase, “tien nao cua nay,” which means you get what you pay for.

It’s great to find a value meal deal but that can’t be the sole motivator. Traditional cuisines take a lot of labor to prepare, just as much as modern cuisines do. When customers expect low prices for “ethnic” food, there are costs involved, such as: low wages, low-quality ingredients and poor working conditions.

Little Saigon business owners are traditionally hyper-competitive so they drive down prices or feel pressure to keep them low. That kind of Darwinian business approach exploits low-skilled laborers and keeps the whole community down. I was once told that a Viet restaurant worker had to bring her own plastic gloves to work because the employer was not willing to pay for them.

Then when a Viet restaurant opens outside of the enclave, incorporates sustainable business practices and charges higher prices, customers often complain. They’re not considering factors such as higher rents, decor and maintenance, fair wages, insurance and good ingredients. Those customers are merely looking at the bill and comparing it to what they may pay in Little Saigon. But slowly, things are changing. Prices at Little Saigon restaurants are creeping up. I recently paid $8 for good beef pho in San Jose’s Little Saigon area. Imagine that bowl if people were willing to pay ramen prices!

In Vietnam, you can eat out inexpensively but if you pay more, you get more craftsmanship and ambiance, and the cooks are happier, too. It is not a cheap country.

The notion that certain “ethnic” cuisines have to be cheap to be good robs those cuisines of dignity and worth. And categorizing certain cuisines as “ethnic” means that they are the Other, exotic and mysterious. I hope we get beyond that soon.

And for more fascinating stories on food, culture and culinary magic, read Lucky Peach on Flipboard.