Behind the Story: Racked Gets the Full Report on Fast Fashion 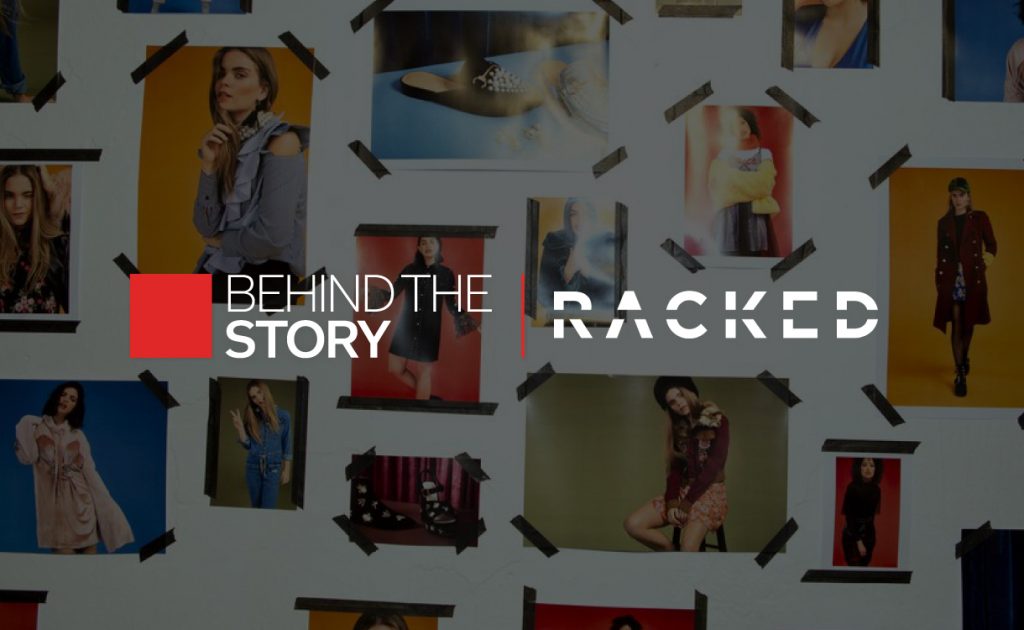 Fast fashion is transforming the shopping landscape. New items are made quickly and adapted to fit user wants in real time, and brands are impacting local and international economies, not to mention the environment. The prevalence of this growing industry is uniquely evident in the U.K., where Racked‘s Chavie Lieber spent time immersing herself in this rapid culture.

In her story, Lieber focused on Boohoo and ASOS, brands that lead the movement as strictly e-commerce experiences. Boohoo’s revenue more than doubled in 2016 to $378 million, up from $180 million in 2015, while ASOS’ revenue went from $716 million in 2012 to $1.8 billion in 2016. The result, according to Lieber, is fashion that is “completely democratized,” a generation of on-trend shoppers, and a reenergized sector of the British economy.

We talked to Lieber about what the fast fashion culture is like on the ground, if there is a downside to furious growth, and how the U.S. measures up.

Why did you focus on the U.K.?
I cover retail and American retail has been in a really difficult year or two. When you follow the money, where shoppers are going, who’s having success versus failure, it’s either been Amazon or fast fashion. And when I researched fast fashion, the big three all come from different countries. Inditex, which owns Zara, is based in Spain. H&M is in Sweden and UNIQLO is in Japan. There’s Forever21, which is American-based but the owners are Korean. But then if you look at the rest of the fast fashion brands, they all come from the U.K. Boohoo, ASOS, Missguided, Topshop, New Look, River Island, Matalan and Primark, which is Irish but has a really strong presence in the U.K. So that sort of got my wheels turning about why England. Why does England have such a strong shopping culture? And why are so many of these brands coming out of the U.K.? That’s how the story began.

In the piece you talk about shopping being the national sport. Why is that?
This isn’t necessarily unique to England, but from the research I did, the culture happens to be really obsessed with celebrities and the royals. One of the research analysts I interviewed said during the ’90s and early 2000s, people were obsessed with tabloids and celebrity magazines—the weekly mags that were covering the Spice Girls and all the early “It Girls.” America definitely also has that type of culture, but it’s stronger in the U.K. because it’s so small. If somebody is popular in London, they’re probably also popular in Manchester and Exeter. Because the geography is so concentrated, the trends, looks and the “It Girls” really touch all corners of the U.K. In return, I think people are really entrenched in the celebrity culture and try to imitate them, not unlike the U.S.

In the piece you also talk about the creation of 700 styles a week from Boohoo alone, which is staggering. What’s the upside and the downside to producing clothes that quickly?
For the last year, as I’m sure you know, retail has just been a devastating category to cover, as someone who covers the business angle here. I feel like every two weeks there’s another company that’s closing 300 stores or the CEO is being laid off. At Macy’s 10,000 jobs were cut. Companies are filing for bankruptcy. It’s just getting worse and worse. Stores are losing foot traffic and people are shopping online. But the important factor here is that a lot of the reason why people aren’t shopping at these classic American retailers is because they’re turning to fast fashion. So brands like Zara, H&M, Forever21—they’ve provided a cheaper, faster alternative place for shoppers to turn to.

When I was researching this, there was an upside and there was a downside. The upside of course is that fashion is now completely democratized. You don’t have the runway necessarily dictating the styles, and people can afford trendy clothes and they can afford to look good. They don’t have to pay a luxury price, especially when a brand like Zara is completely knocking off. Anything you’ll see at Balenciaga, Zara’s going to make a week later. That’s the upside.

The downside, of course, are the effects that it has on a) the environment, and b) humanitarian issues. That category of fast fashion reporting is a story unto itself. It was something I couldn’t ignore and was thinking about a lot when I was walking around the Boohoo headquarters and seeing how fast and how eager they are to pump out trends and how cheap the clothing is.

Do you think it just keeps getting faster and faster? Is there a breaking point, and did you see any signs of that?
Boohoo and ASOS are the examples of fast fashion getting faster. They’re the epitome of next generation fast fashion. When I was doing research about other brands to include while I was in the U.K., I was thinking about Topshop or River Island or New Look, but the nugget that made me really want to focus the story on ASOS and Boohoo was that they are what they call “pure players,” or e-commerce only. Because they’re only online, they don’t have stores to fill, so they don’t have to make 10,000 copies of one shirt. Boohoo has screens in their office where they’re watching sales every 20 minutes. So if something sells out right away, they can just hop on it and make the same product in maybe a new color. That’s really how they’re jumping on the trends.

This was definitely fast fashion in hyper drive, fast fashion on steroids. And it’s definitely getting faster. I saw reports from a brand like H&M, which a few months ago said they need to reassess their supply chain because H&M and Zara typically work on a six-week turnaround and that’s considered slow today, which is so crazy. I just saw a report that Ralph Lauren is also reconsidering the fast fashion method and they want to do a turnaround of nine months. Ten years ago that would have been like, “Oh OK that’s pretty fast.” But today, you snooze, you lose.

The most interesting part was I spent a day walking around Oxford Street in London. I was just popping into all the stores. A lot of the shoppers were teenagers and I was asking them if they care about the environment, if they care about humanitarian causes, and of course everybody says yes. But then when it comes to buying the latest trendy shirt for £8, they don’t necessarily care. They don’t necessarily equate the two. And it has just become such a part of the shopping culture now. Of course you’re going to go to Zara every season and buy new clothes. If you see something trendy, of course you’re just going to turn to ASOS and type the style in.

I went into this thinking maybe this was a bubble. But I’m just not sure if it is.
At Flipboard, we think a lot about the power we put into the reader’s hands to choose the kind of content they want. And in fast fashion, it seems like these companies are doing that with clothes—the shopper has the power.

Absolutely. Boohoo, for example, has active and reactive ways of designing. They have a design team that is looking at bloggers. When I was there they had whole runway looks that they were sitting down and dissecting. They were talking about color palettes and fabric and silhouettes.

On the other hand, their team is reactive if they see something. A lot of people in the U.K. refer to Kim Kardashian as “Kimmy K.” They were like, “If Kimmy K. is wearing something really trendy, we can react to it.” It can be on the Boohoo website in two weeks, and if shoppers like it they’re just going to keep making more.

In that way fast fashion has definitely democratized the way we shop today and democratized the fashion industry. But who are the leaders? Are the influencers these teens on Instagram that are just copying someone else?

Or are the influencers the fashion houses since that’s who’s providing the celebrities with the clothes?
Exactly. I interviewed this professor from the London School of Economics named Ben Voyer. He said he thinks that the category is really fickle and that while we see fast fashion as being so important and so powerful today, who knows it’s going to be in five or 10 years because a lot of the shoppers are going to grow up and make more money. Maybe then they won’t want those Gucci slipper knockoffs from ASOS; they’re probably going to want the actual Gucci slipper.

The flip side of the argument is what the people at Boohoo said to me, which is: there will always be teens and 20-somethings who are going to want to buy cheap options. But the thing is fashion and shopping are always changing, especially with technology today. You look at all of the renting services that are happening now and who knows, maybe that’s the next big thing.

You didn’t get the sense that these brands were worried about growing with their buyer? They just expect to get new ones?
That’s what it seemed like. When I pressed some of the executives from these companies, they said Boohoo shoppers do skew older, in their late 30s. But it seemed like everyone’s really focused on the millennial customer. They aren’t necessarily thinking about the older customer. It’s just going to be interesting to see 10 years from now what the Gen Z shopping habits are going to be. It doesn’t seem like they’re necessarily interested in aging with their customer.

A lot of these companies have big U.S. presences and want to grow here. Do you see American companies competing? What’s the landscape like here?
I think abroad Gap, Abercrombie & Fitch and American Eagle still have a cool reputation. But I think it’s really hard for those brands to compete with these fast fashion companies because of the really fast supply chain, because these brands are trend first. A lot of American companies make their clothes in the exact same factories; it just seems like they [the American brands] are a few steps behind.

The proof is in the pudding. Sales are down for American brands, while Boohoo grew 145 percent in the last year and ASOS’ sales continue to climb. Even though H&M said that they’re slowing down on their store expansion, they’re pumping out new brands left and right…So it just seems like these fast fashion companies are just getting stronger, while the classic American retailers are struggling.

What about the impact these companies are having on industrialized cities in the U.K. Does this lead to a revival of those cities or does it help the economy more broadly?
I know that is definitely something that Boohoo talks about. I don’t know if it’s accurate to say they’re having a textile boom, but there are four up and coming fashion retailers based in Manchester: Boohoo, PrettyLittleThing, Missguided and SilkFred. A lot of the product especially for Boohoo is made in the U.K. So these brands claim that they’re bringing jobs to England, and I guess reclaiming the roots of what Manchester once had in the industrial revolution.

Read Racked on Flipboard for the latest styles and unique takes on the business of fashion.

~GabyS is reading Royal Family News, curated by Flipboard U.K., because she can’t get enough of the House of Windsor

Posted in: Behind the Story fashion Racked style