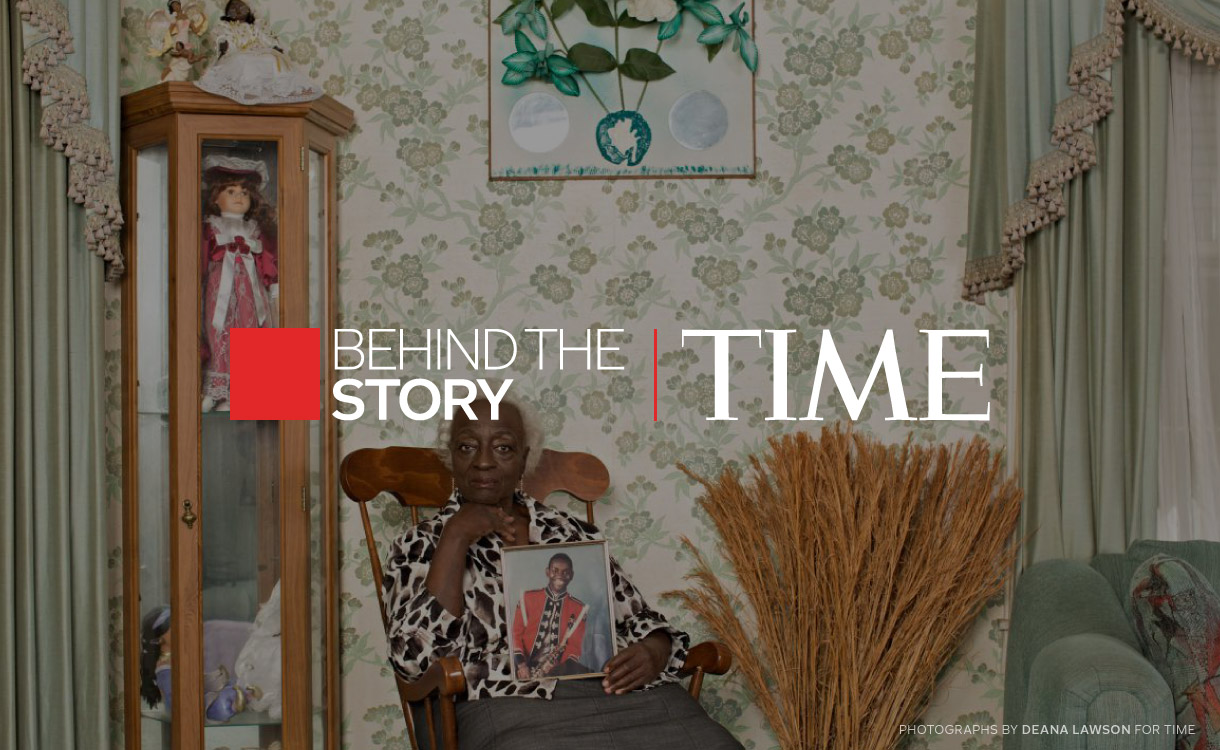 Story: “How Do You Forgive a Murder?”

On July 17, 2015, a gunman opened fire at the Emanuel African Methodist Episcopal Church in Charleston, South Carolina, killing nine people. In the aftermath of the tragedy, TIME magazine moved two journalists to Charleston, where they lived for nearly two months. Jay Newton-Small and Maya Rhodan attended church and Bible study and conducted over 150 interviews, some of which were eight hours long. TIME Editor-at-Large David Von Drehle then crafted the over 200,000 words into a cover story for the magazine, released last week, which tells the story of the families, city and country affected by the events of that day. Von Drehle spoke to us about the piece that powerfully weaves text, images and audio together.

Did previous stories or assignments help prepare you for this story? Or is there no way to mentally or emotionally prepare?
No, I don’t think there is. Maya and Jay, I know, shared a lot of tears with folks in and around Charleston. And I have to say that as I was writing the last sections of the story, I found myself breaking down. It’s a tremendous amount of pain and loss and suffering for no good reason at all. It’s such a waste of such good people, and there’s no way to prepare yourself for it. I’ve unfortunately had to cover a lot of murder in a 35-year career as a reporter and writer, and it doesn’t get any easier.

As a viewer from afar it was heartbreaking to watch Nadine Collier offer her forgiveness. What did you learn during this process about grief and the capacity humans have for forgiveness?
It’s remarkable. But it’s important to know and honor the fact that not all of the survivors are at that same place as Nadine, not even everyone in Nadine’s own family feels like they are at that point of being able to say that or even that it was the right thing to say at the time. It’s very complicated. Who is allowed to forgive? Who is forgiveness for? Is the forgiveness for the offender, the person who’s committed the crime? Are you forgiving the murder itself? Because really it’s hard to talk about forgiving murder because the person who’s been victimized is dead.

What I think was going on with Nadine and some of the others was in a way, kind of a declaration of independence on their part to say they aren’t going to allow this individual to come into their lives and change the kind of person they want to be.

What role did you see religion playing in the grief felt by the victims?
This story is all about religion. The folks were killed in a Wednesday night Bible study. There’s an expression in some churches, they talk about “Wednesday people.” They’re the ones for whom Sunday’s not enough church—they’re going to be back in the middle of the week for more. And these were all Wednesday people. They were very serious about their faith, and it was absolutely central to their lives…It’s a little unusual in a mainstream magazine, as mainstream as Time, to have an article of this length in which Christian faith plays such a central role. But that’s the way to be true to this story, to put that front and center because it was front and center in their lives.

You include other teachings, about Buddhism and Judaism, and made comparisons to the concentration camps. What was it about the stories that caused you to draw those lines of comparison throughout the piece?
Because it’s a question of dealing with loss. Loss is universal; everyone goes through it. It’s part of life that we lose people that are important to us, hopefully not in this kind of way. Figuring out how to deal with it and how to deal with these questions of forgiveness—they cut across all faiths and people of no religious faith have to figure out philosophically how to live through these issues as well.

Do you think the #BlackLivesMatter and/or the racial discussions in the country impacted the reaction to the shooting, or vice versa?
It’s obviously a subject that the whole country is confronting right now. I think the fact that Charleston did not erupt in violence or violent protest after the Emanuel shootings, or after the shooting of Walter Scott by a police officer in North Charleston earlier this year, is an important piece of that national confrontation. People are approaching the same issues in different ways, emphasizing different parts of their responses. But I think it’s important to say that they’re all valid responses. The anger is just as valid, as the talk about forgiveness.

There was a quote that struck me from Ina Jackson, who lost her grandmother in the shooting, about strength, that it’s harder to be peaceful than destructive. What did you learn about strength?
How to project strength in the face of violence and oppression has been a debate within the African-American community for many many decades. One of my colleagues suggested that it has connections to the old Malcolm X and Martin Luther King discussions of the 1960s. What’s the right way to respond to violence and oppression? And that continues to be a live discussion. We’ve seen it playing out again this year all over the country. They’re both ways of projecting strength and resistance.

How would you describe the city of Charleston and the people of Charleston now? How has it and how have they changed?
I’ve been going to Charleston off and on for different stories for 25+ years. Charleston is a very different place than it was a generation ago—much more honest about its past. And I think what we’ve seen over the past five months has accelerated that process even more. It’s for the people of Charleston to decide if they should be going even faster in their progress—it’s not for me to tell them. But that’s a city with a lot of ugly history that it ignored for a very long time, and I think now they’re coming to grips with it in an accelerating process.

Read TIME’s full cover story, “How Do You Forgive a Murder?” here.

Posted in: Behind the Story Charleston shooting news time inc