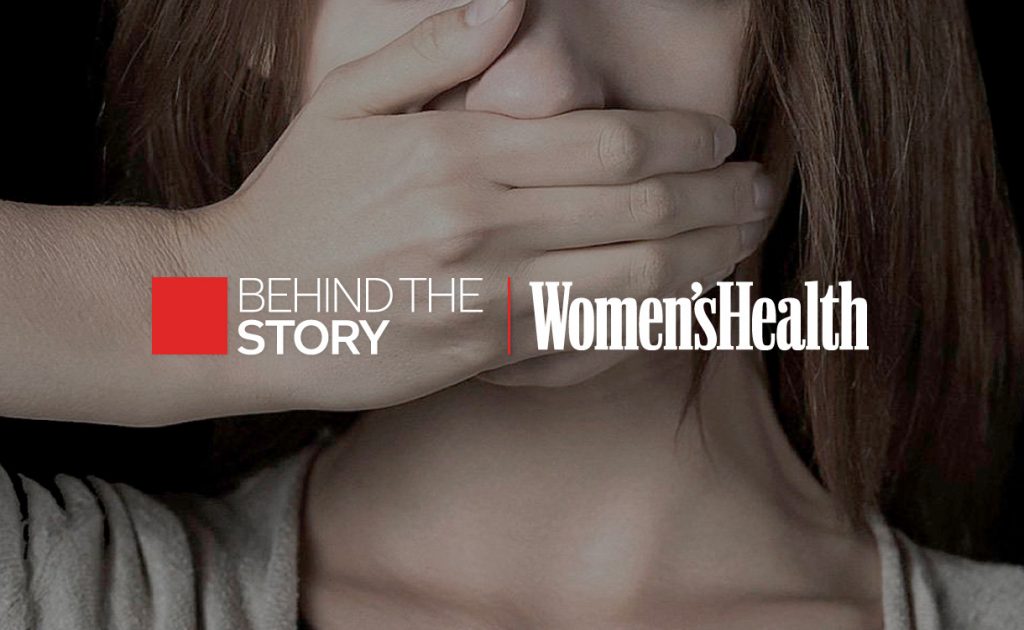 Story 1: Life After Rape: The Sexual Assault Issue No One’s Talking About

Seventy percent of sexual assault victims experience moderate to severe post traumatic stress disorder (PTSD). Seventy-five percent of victims are attacked by someone they know. More than 3,100 doctors across the country were found guilty of sexual misconduct, according to a recent Atlanta Journal-Constitution (AJC) investigation.

Women’s Health, in a new series, sought to put a human face on these figures. The reporters in two pieces spoke to victims, experts and advocates with the goal of increasing awareness and improving education around these at times difficult topics.

“Hopefully the role we can play in that is removing some of that barrier to shame by having these women speaking publicly, by using their own voices,” editor Tracy Middleton told us.

We spoke to Middleton about the origins of the series, how the reporting of these offenses has changed and what her message is to victimized women.

How did this series come to be?
The first story that we did on the long-term effects of sexual assault was an idea that had been brought to us by the writer, Carrie Arnold, who is amazing and has written for us quite a few times. It just seemed so timely to do it now. There has been so much going on, even before what’s been happening in the last few weeks with the election. There’s a lot going on talking about rape culture, talking about how to prevent assault on campus, certainly after everything that happened at Stanford.

The conversation around prevention is obviously so important, and if prevention happens then we never end up with the long-term effects. But there are these women who have been assaulted and are still feeling the effects of that years, and in some cases, decades later. And there really isn’t any attention brought to this, nor are there a lot of resources for these women.

So we really started off from there, and we wanted to do that story. And then when we read the reports from the Atlanta Journal Constitution about the prevalence of sexual misconduct by physicians, it just seemed like such a natural fit for us to cover. We thought this was a great opportunity to do a series we’ve been wanting to bring attention to for a while.

What was the process like in finding the women to speak to these issues?
It was not as difficult as we thought it might be. I think for the second story it was a little bit more difficult, just because they are people who might be in the midst of a legal battle or have a court case still going on and need to be a little bit careful about what they can and can’t say publicly.

But one of the things I thought was really kind of heartening…was these were women who wanted to talk. And they wanted to talk using their own name—all of their own details, they wanted to stand up and say, “We’re not ashamed of this.” Sometimes in stories we’ll use pseudonyms for women who don’t want to be publicly associated with that, and that just wasn’t the case here. It was really the opposite. I thought it was so brave of them and really also demonstrates how we’re getting to that point culturally where this isn’t something to be embarrassed about. Even though during the Stanford trial the woman was asked those kind of horrible questions—like “What were you wearing?” and “How much did you drink?”—that tried to kind of shift the blame onto her, women are getting to the point where they are refusing that blame. They are wanting to publicly say that this isn’t something they should be ashamed of, nor should any woman be ashamed of it if it happens to her.

The constant theme in the stories was the feeling of shame experienced by the victims. Where do you think that shame comes from?
I think it comes from so many places and certainly we’ve tried to explore that in the piece. When sexual assault happens usually it’s by someone the woman knows…sometimes a person they’ve known for a long time. In the case of the physicians, it’s someone you’re already going to. You’ve chosen them; you’re paying them to address your body. One of the experts said that among people who aren’t the victims, there’s this idea of not wanting to believe it could happen to you. The psychology in our own minds of this is that we place some of the blame and onus on the victim. It’s almost self-protecting of us. It couldn’t have happened to us because I would have done something differently to prevent that. And the reality is that’s just not the case.

I was struck by the survey in the second story that showed a high percentage of women now avoid doctors and skip pelvic exams. What did you learn about the lasting impact of this victimization?
We did a reader survey around this story, and one of the things I was really struck by is the sheer amount of women who responded to our survey who said this had happened to them. Twenty seven percent said they had definitely experienced sexual misconduct by a doctor. Another 25 percent said they weren’t sure, which is something I think is super common. When you’re in that situation, especially in something like a gynecological exam, he’s supposed to be touching your genitals and examining you, so it’s a little like, “Oh, did that just happen?” or maybe I imagined that? Maybe that was supposed to be part of the exam?

I think when women are in that position when they’re so vulnerable anyway—you’re there naked except maybe for this little paper gown—the doctor is just culturally someone we put on a high standing of power. This is someone who’s supposed to have taken an oath to protect patients. When that trust is violated, it cuts so much deeper in some cases than any other kind of sexual assault…Not only did women say they had skipped pelvic exams and things like that, they now kind of don’t have lots of screening tests—cancer screenings, skin cancer screenings, breast exams. They don’t go to a doctor even when they’re sick for something else. They just really have that distrust of the profession, which is a shame because the vast majority of doctors do not abuse their patients. It really is those bad actors that are rare, but when it happens it’s just so damaging to women.

Have you seen a change in the reporting of these crimes and how we handle them as a society?
Unfortunately, the reporting still seems to be very low. The one thing that I think is a little bit heartening is there’s a lot that’s being done with a lot of the untested rape kits. There’s legislation going forward, and we’re seeing different communities across the country trying to work through this backlog and bring some of these cases to justice—or even bring just a little bit of closure to women. The part that I would like to see more happening there is dealing with the psychological downfall, potentially, of a woman who was assaulted 10 years ago or longer and gets this phone call out of the blue that now they’ve tested her rape kit that has been sitting in a warehouse somewhere for years. What is she meant to do with that information? What are her legal options? Is it a civil suit or a criminal suit? Really just having some kind of counseling there for them, even if she decides not to take any kind of action, which is absolutely fine too.

But how do you deal with someone dredging up these feelings you may have thought you put behind you? We’re doing a lot of things; it just seems like there still so much to be done.

The second story compared the actions of these doctors to those of priests. How do they compare and what can be learned from the fallout from the priest controversy?
I think they are so, so similar because you have this person who’s in a trusted position that you are taught from a young age to really put your trust in; trust them with your secrets. The one thing the expert said to me that just struck me as a woman and as a mother was, “When you’re a child and we’re talking about your body, we’re like: ‘Nobody should see you naked except for mom, dad and the doctor.'” So there’s this kind of implicit training to trust these people, and then on the backend of that is the institution that is really protecting and hiding the offenders.

There were just so many cases that were spelled out in the Atlanta Journal Constitution investigation. I want to give them so much credit because they spent so much time and effort combing through 100,000 documents to find these numbers. Doctors by and large, when these stories and actions are brought to disciplinary boards, so often they’re just kind of brushed under the carpet or they aren’t reported to the police. They’re not reported to the state licensing boards in a lot of instances. And even when they are a lot of times, the doctors get a little bit of a slap on the wrist or they might lose their license in one state. But there’s nothing to prevent them then from being relicensed in another state and moving their practice.

Our message to women is to keep talking about these things. Talk about them without shame. I was so shocked that this had happened to so many of our readers, so I think there are a lot of women who are still staying silent about it. Don’t be afraid to report it to someone.

Follow Women’s Health on Flipboard for news, tips and stories that encourage wellness and confidence.

~GabyS is reading about health care

Posted in: Behind the Story health Women's Health