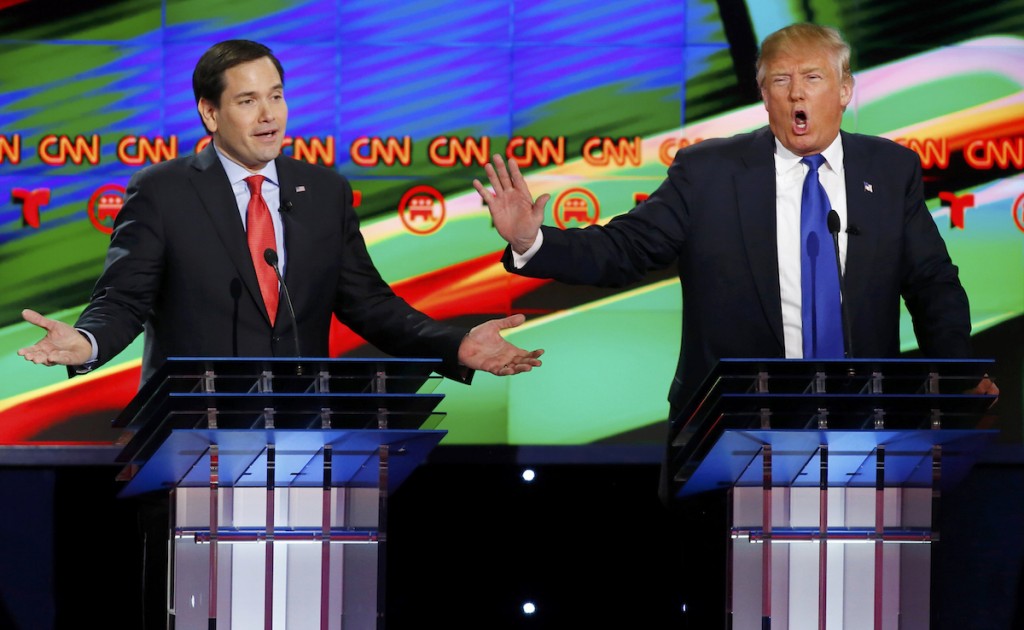 Thursday’s debate was a brawl between Donald Trump and those attempting to eclipse him for the Republican nomination. Marco Rubio and Ted Cruz faced off with the frontrunner over health care, immigration and conservatism in the final debate before Super Tuesday, when Republican voters in eleven states will vote. We spoke to CNN Politics Managing Editor Z. Byron Wolf to break down the night’s most important moments and preview the biggest storylines ahead.

Was permanent damage done to Trump’s candidacy tonight?
Who the heck knows! Donald Trump has been confounding expectations and rewriting political rules for nine months. I’m not going to predict it now. Yes, he was hit–and hit hard–by Marco Rubio and, to a lesser extent, by Ted Cruz. They raised questions about his conservative cred, called him a flip-flopper on immigration and abortion. Rubio went after his now-defunct Trump University and foreign workers he reportedly employs. It wasn’t pretty. But Super Tuesday is March 1–days away. Will these attacks stick? Is there time for them to do damage? We shall see.

What were the strongest attacks against Trump?
Marco Rubio asked people to google Donald Trump’s settlement many years ago over Polish workers. But according to Google search data, it was actually his broadsides about Trump University that led to the largest real-time Internet interest. That’s a complicated tale. Rubio called the university–really a series of classes on real estate–a “fake” school. Trump is set to potentially take the stand in a federal case accusing him of fraud stemming from it.

The other attack that landed had to do with Trump’s taxes. The tax issue was set up by an innuendo campaign from Mitt Romney earlier this week. Romney, without any evidence, said Trump should release his taxes because there might be a “bombshell” in there. Romney continued to troll Trump on Twitter during the debate, by the way. Trump said tonight he won’t release anything because he’s under audit—yes, he’s apparently being audited by the IRS—right now. That was news to most reporters. Trump said he’s periodically audited, but he argued he’d be crazy to release his tax returns in the midst of an audit. Might be crazy not to release his tax returns during the middle of an election.

How will tonight’s debate impact Rubio’s candidacy and Cruz’s candidacy going forward?
Marco Rubio took up the anti-Trump mantle tonight. His campaign suffered a setback after a disastrous performance ahead of New Hampshire. Nothing disastrous tonight. Rubio, without a doubt, was a changed candidate on the stage. He handled Trump in a way that no other candidate has and he appeared to enjoy doing it. The big question is why he waited so long. He needs a win. It’s not clear from recent polling where he’ll get one. He outlasted most of the other “establishment” candidates by laying low.

But—and this is a big but—the campaign so far is littered with the political corpses of candidates who tangled with Trump. Ask Jeb Bush, the latest casualty, who dropped out last week. He had tried repeatedly to take on Trump. But now he will get the full weight of Trump’s ire.

Cruz also performed well. He rides in a different lane than Rubio, however. Cruz’s main appeal is to religious and social conservatives. He wants to wrest them away from Trump and he landed solid blows against Trump on the issue of abortion and the Supreme Court tonight. He makes the point that he’s the only candidate so far to beat Trump. That’s true. But his own state is on the ballot on Tuesday. He needs to win at home—and he’s implied this, too—if he wants to challenge Trump to be credible.

Given where the polls are now, is Trump’s nomination inevitable?
No. Most of the delegates are won or lost in March. He leads in polls in Super Tuesday states. But there aren’t many polls in any of those states. Five days can be a long time. Let’s see how the coverage and the reaction progress after tonight’s pile on Trump. That said, he’s by far the likeliest GOP nominee. He has the most delegates and the lead in just about every state that’s been polled. There will have to be a communal changing of Republican minds for him to lose.

What are the biggest storylines to watch in the final week before Super Tuesday?
There are three: Can Cruz win his own state? Can Rubio catch on? Is Trump wounded?

How likely is that anyone drops out before Super Tuesday?
I can’t imagine anyone dropping out before Super Tuesday. John Kasich, after a strong showing in New Hampshire, has been a blip. He barely factored tonight. But he’s the governor of Ohio and that state—which is large and purple—has its nominating contest later this month. He’ll wait for that. Ben Carson shows no signs of slowing even though his support has bottomed out. Ted Cruz and Marco Rubio both want to be the foil to Trump. They’ll battle for that right.

How likely is a brokered convention?
Ask me next Wednesday after Super Tuesday. But it is interesting, as we learned today, that Rubio is actively planning for one.

Follow CNN’s debate and polling Flipboard Magazine and Election Central for all the news on the upcoming elections.