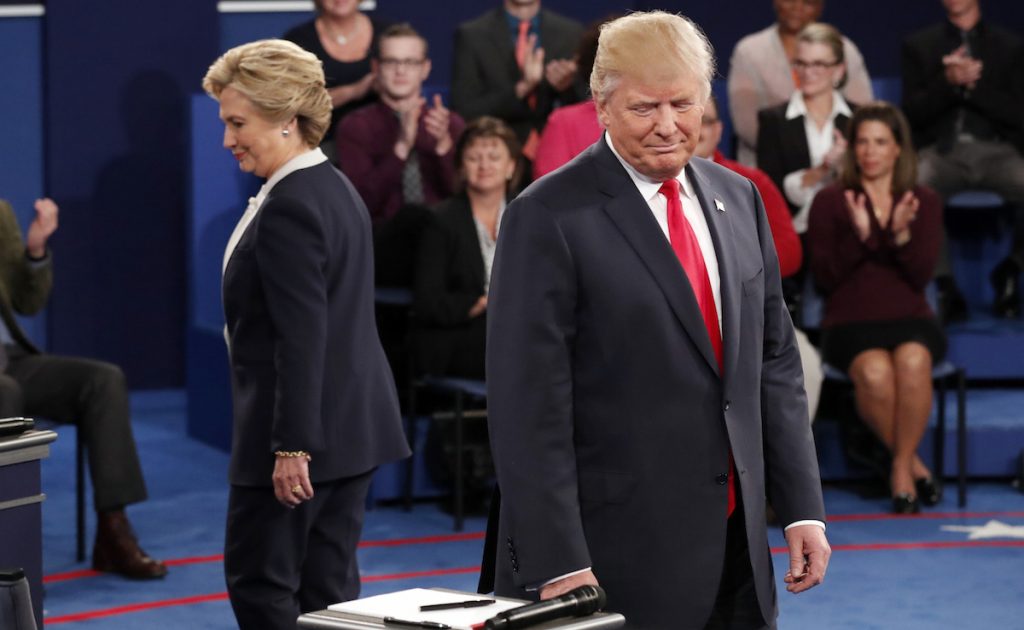 Democratic presidential nominee Hillary Clinton and Republican presidential nominee Donald Trump squared off Sunday night in a 90-minute debate filled with harsh critiques and uncomfortable allegations. The event came two days after a lewd tape of Trump surfaced from 2005 that caused a slew of Republicans to disavow the businessman and less than two hours after Trump appeared with women who previously accused Bill Clinton of sexual assault. The stakes were high for both candidates heading into town hall-style debate, but even greater for Trump who was under fire from all sides in the lead-up.

Clinton attacked Trump over his treatment of women and minority groups, his fitness to serve as commander in chief and his claims about her record. Trump attacked Clinton over her emails, her effectiveness in elected office and the state of U.S. foreign policy. Polling after the event suggested Clinton “won” the debate, but it also showed little movement among Trump’s base of supporters, who remain in his corner.

We spoke to CNN Politics Managing Editor Z. Byron Wolf to assess whether Trump was able to stop the bleeding within the GOP, what jabs were most effective and what the face-off means for the race going forward.

Did Donald Trump halt the fallout from Friday’s leaked video?
No. But he might have stopped the bleeding a bit. He definitely hit hard at Hillary Clinton just before the debate when he appeared in person with women who have accused Bill Clinton of sexual assault. He also invited the three women into the debate hall and then made a very direct mention about the former president, calling him “abusive to women.” The debate went scorched-earth and there’s no denying that. To the specific question of the tape, Trump was asked directly by Anderson Cooper if he knew that what he described in the tape—feeling able to grope women because he’s a star—was sexual assault. Trump deflected and repeatedly called it just “locker room talk,” before pivoting to an answer on ISIS, which was a bit weird. After the debate, we aren’t talking so much about the tape. That could change in a heartbeat.

As a secondary thought on this, he basically said he never acted out the kind of aggressive things he said. It was braggadocio that wasn’t based on real actions, he said. It will be interesting to see if he has a similar response to his pledge to put Hillary Clinton in jail. That’s the incredible promise that has emerged from the night and drawn comparisons to people like Vladimir Putin.

Will Trump’s appearance with the Bill Clinton accusers impact the race?
Not directly. These allegations against Bill Clinton are all decades old, so I don’t think it will shock the race. But it certainly won’t endear anyone to Bill Clinton, and by extension, perhaps, his wife who is running for president. I’d say those allegations might keep some people who don’t like the Clintons, who might have voted for them anyway, from switching over. But it’s probably not going to turn the race.

Did Trump more effectively attack Clinton during this debate?
Yes. He was more controlled and effective and clearly prepared. He had frustrations with the moderators for interrupting him, but he had some interesting moments, particularly calling her on her emails, pointing out problems with Obamacare, foreign policy and more.

What were Clinton’s strongest attacks?
She was very good at the beginning, calling him out over the now-infamous tape where he talked about being sexually aggressive with women. That’s not who we are as a country, she said. It was effective. She did a good job countering him on Muslims, too. When he attacked Bill Clinton, she kept her cool. She did a good job going after him again on his failure to pay income tax. And—NEWSFLASH—he admitted he didn’t pay federal income tax for years because of that nearly billion dollar loss he incurred in the 90s. He said he still pays lots of taxes.

On what policy issues were the candidates the strongest?
You know, I’m having trouble recalling the policy from this debate. Trump broke with Mike Pence, his running mate, over Syria. They talked a lot about each other and why the other person is bad. This has never been a policy election. It certainly wasn’t last night. But it felt even worse. With Trump’s stunt with the Clinton accusers before the debate and the tenor of the discussion during it, it felt somehow like the country has turned some kind of corner into a new era of politics. Not a lot (maybe nothing) to be inspired by tonight.

Who connected better on emotional level, especially with the undecided voters who questioned the candidates?
Our CNN/ORC post-debate poll showed Clinton won among debate watchers 57 percent to 34 percent. Sounds like a big win, but it tracks very closely to the debate watchers pre-debate preferences, which were 58 percent for Clinton. Trump certainly outperformed expectations, but I don’t know who is going to change their mind because of tonight.

How will this debate impact the Republican Party going forward?
Turmoil does not begin to describe what’s going on in the Republican Party right now. They’re facing a very beatable candidate in Hillary Clinton, but less than two months before Election Day, there are important members of the party abandoning their running mate because of that lewd tape that leaked. Trump was trying to halt a free fall of confidence tonight. He might have solidified his base and helped himself with Republicans. But the GOP’s problems are much bigger than the debate. Stay tuned in the coming days.

What were the most memorable one-liners of the night?
There was one line I can’t get out of my head: “You’d be in jail.” It was something Trump threw out, interrupting Clinton as she said she hopes we’re never in a situation where he’s in charge of enforcing laws. That line has taken over the post-debate chatter. It’s striking to think, even if he was joking, that one candidate could put the other behind bars after an American election. That’s the stuff of dictators and strongmen. If I had to guess, that’ll be the one that lives beyond tonight.

Follow Election Central for all the campaign news in the final month of the race.