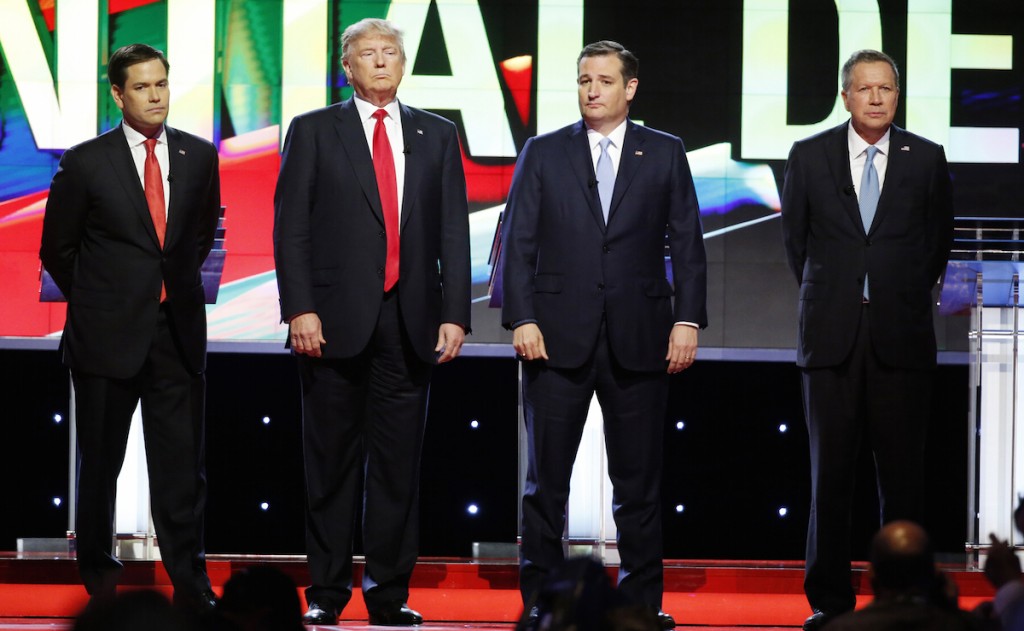 The four Republican presidential candidates civilly debated policy issues Thursday night, in stark contrast to the contentious tone of the previous 11 GOP debates of this cycle. In the final face off before Tuesday’s crucial primaries, Donald Trump, Ted Cruz, Marco Rubio and John Kasich discussed trade, jobs and foreign policy before a crowd of Florida voters. We spoke to CNN Politics Managing Editor Z. Byron Wolf to measure the impact of the CNN-hosted debate and assess the state of the race before voting day.

What were last night’s top moments?
Unlike the last GOP debate, which found its way into the gutter, this one stayed very policy focused. It’s not that policy isn’t exciting—it is, people!—but the debate lacked the kind of definitive moment to change things.

Trump had a few awkward moments, particularly the aforementioned Cuba exchange. Trump’s position that the U.S. should rethink the embargo is probably more in line with most of America. But this debate was in South Florida. There was also a moment where talked about Vladimir Putin and described him as a strong leader. It may be true, but was strange to hear coming out of the Republican candidate’s mouth.

Trump had a better time when he interrupted Ted Cruz’s answer on whether he would take his candidacy to a contested convention. Trump said the answer was just to make him president. There were hoots from the audience.

Trump was hit repeatedly on policy issues. Over what issue(s) was Trump most hurt?
Trump’s argument that Social Security can be left, essentially alone, breaks with Republican principles and ideology for the past 20 years. Rubio is ready to raise the retirement age for future retirees. That’s a pretty commonly accepted requirement among Republicans.

There were also several moments on foreign policy that could haunt Trump. His supporters don’t seem to mind his stance on Muslims and Islam, for instance. But Cruz, Kasich and Rubio all fought back hard against him on it. And in a general election, his indictment of the entire religion could be a liability.

Did Cruz make a strong enough case last night to be the leading anti-Trump contender?
I’m not sure. Cruz had some solid moments. But I don’t think he was as strong as Rubio last night. Not that it matters. Trump pointed out his delegate lead is nearly insurmountable. If Trump is to be beat, it might have to be at the convention.

Will Rubio’s performance help or hurt his standing in the race?
I’m sure it will help. But will it help enough? Floridians vote on Tuesday. Rubio has had strong debate performances before. He’s only won Minnesota and Puerto Rico. I’m not sure this one will change the direction of things where the others did not. Florida is must-win for Rubio. Recent polls have had him down by more than 10 points to Trump in his home state. That’s a lot of ground to make up in less than a week.

Will Trump’s statement that “Islam hates us” and his discussion of it last night appeal to a certain voting group or hurt him among voters?
It will appeal to Trump voters. It might hurt him among everyone else. The enduring question of this primary is who are these Trump voters. Are they new to the process? Are they Republicans? Have they voted before? Are they Independents? The answer is all of the above. The larger point on Trump’s “Islam hates us” line is that it can have a real impact on U.S. foreign policy and, as Kasich, Cruz and Rubio pointed out last night, the coalition with which the U.S. is fighting ISIS.

There was a much more subdued tone last night. Does that shift in tone help or hurt Kasich, who’s had that tone throughout the race?
I think it hurts Kasich. He did well when he could say, essentially, “look at those guys in the gutter; I’m keeping clean.” He couldn’t do that last night. But his momentum has already been in the right direction. I don’t think Kasich was necessarily hurt last night. But he didn’t have a breakout moment.

Kasich’s moderate views could arguably works best in a general election and against a potential nominee Hillary Clinton. Does he have a path to the nomination?
We’ll see. It’ll be hard. He’s got the fewest delegates of the remaining candidates. He must win Ohio. Then he must use that momentum to start destroying the competition. He might win Ohio, but destroying the competition after that seems at the moment like a tall order.

Follow all of the debates in CNN Politics’ Flipboard Magazine and get the latest political news in 2016 Election Central.