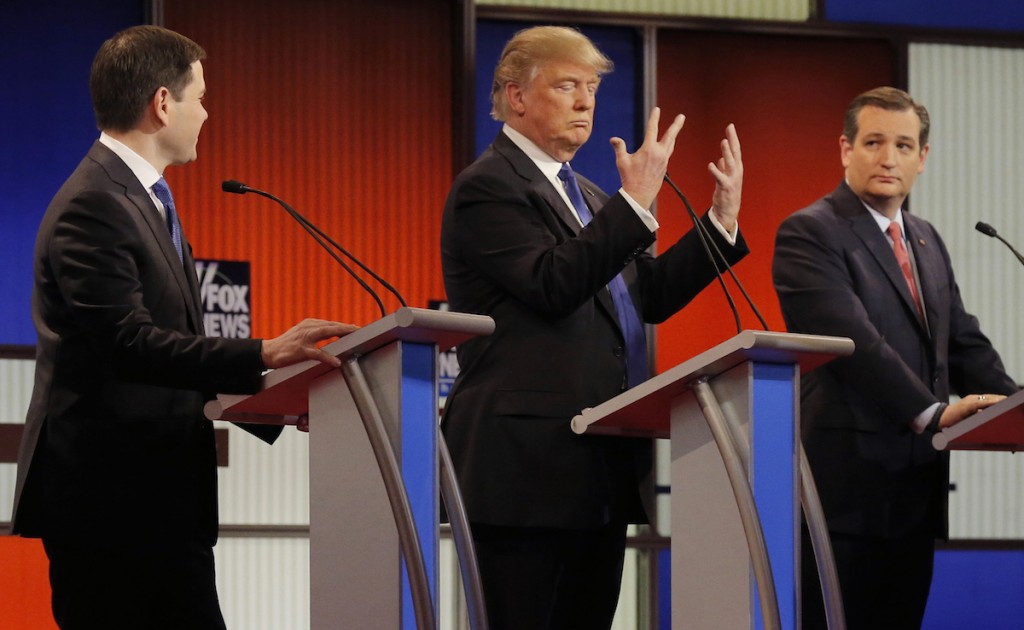 Donald Trump shows off the size of his hands as rivals Marco Rubio and Ted Cruz look on at the start of the Republican presidential candidates debate in Detroit, Michigan, March 3, 2016. REUTERS/Jim Young

The remaining Republican presidential candidates took the stage Thursday night following a speech by former Republican presidential nominee Mitt Romney that threw the election into greater disarray. Romney called on the field to stay in the race until the convention in order to stop Donald Trump, who he attacked repeatedly. Many of those attacks were leveled once again at the front-runner during the Fox News debate, where Trump received much of the ire from Marco Rubio and Ted Cruz. John Kasich stayed on his positive message. We spoke to CNN Politics Managing Editor Z. Byron Wolf to analyze Romney’s impact on the race, the biggest moments of the night and preview the path forward for each candidate.

What were the biggest moments of the night?
There were three for me.

How did Romney’s speech today impact the debate and will it have a lasting impact on the race?
Romney’s speech will certainly have a lasting impact on the race. I don’t think it will be the one thing that turns the tide against Trump. He’s become too powerful and he’s got too much momentum for that. But it did open up the oppo book on the GOP front-runner in a way that none of the candidates have been able to do. And this is the problem for the GOP establishment. They don’t have the respected elder statesmen types who could get in the way of Trump early on. But most of the hits on Trump last night, especially by Rubio and to some extent by Cruz, were teed up by Romney. With his knocks on Trump’s business career, the specific examples of Trump branded companies that failed, and his takedown of Trump University, Romney sought to change the Trump narrative and Trump’s rivals seized upon that.

Did Trump satisfy his doubters on policy last night?
No. His answers on policy are lacking in specifics or clarity. They rely on declarative statements he makes one day and disavows the next. He described it today as “flexibility.” That’s a good word for it. He’s quite flexible, particularly on foreign policy. He’s suggested he’ll be flexible on immigration—his signature issue—too. The seizing last night on his refusal to release a tape of his off the record interview with the New York Times where he is rumored to outline that flexibility on immigration, is going to be an ongoing issue for him.

How will Trump’s changing positions sit with the Republican electorate?
I’ve said this before—who knows! Trump has the very special and unique ability to say whatever he wants and not pay a price with his supporters. He’s like the Obi Wan Kenobi of this race. When they strike him down he becomes more powerful. Logically it seems like the criticisms last night—about his business record, his lack of policy specifics and his flexibility—should hurt him. But normal political logic does not hold in the case of Donald Trump.

Who came out strongest against Trump last night? Will this debate change his standing in the race?
Marco Rubio again tangled with Trump in the best exchanges of the night. Ted Cruz also had some memorable exchanges, but he clearly chose not to tangle in the same way as Rubio. Kasich wasn’t having any of it. He continues to promise to stay above the fray. He gave an eloquent and convincing answer on how Republicans should get along. But getting along isn’t going to get Kasich featured on TV and in the newspaper any more. The race has moved to a stage where multiple states vote at a time and retail politicking takes a back seat to getting in front of the most eyeballs. I’ll give the edge last night to Rubio, barely, simply because his exchanges with Trump are more likely to be seen after this debate.

What is the path to the nomination at this point for Rubio, Cruz and Kasich?
In a word, perilous. Rubio must win his home state of Florida. And he needs to turn that into serious momentum. Kasich must win his home state of Ohio and gain his own momentum. Romney’s argument today, however, was that they should all stay in the race and get as many delegates as possible and then figure out the nominee at the convention. For anybody but Trump to outright win, Trump would have to suffer a remarkable turnaround in support.

Is there an appetite for Kasich’s unification message? Where is that message most likely to prevail?
Yes, I think there’s an appetite for it. It might do well in a general election. But the appetite among the GOP voters is minimal so far. Scratch that. It has done well enough to get him second in Vermont and New Hampshire, neither of which are Republican powerhouses.

To repeat – Kasich must win Ohio, where he is governor. He’d admit that.

How likely is a contested convention?
I’m not a betting man! I think it’s more likely today than it was yesterday.
Follow all of the debates in CNN Politics’ Flipboard Magazine and get the latest political news in 2016 Election Central.

Follow all of the debates in CNN Politics’ Flipboard Magazine and get the latest political news in 2016 Election Central.