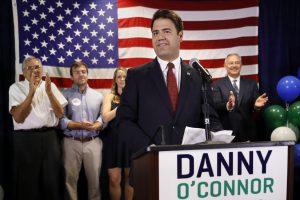 Danny O’Connor, the Franklin County recorder, speaks during an election night watch party at the Ohio Civil Service Employees Association, Tuesday, Aug. 7, 2018, in Westerville, Ohio. O’Connor ran against Republican Troy Balderson in a special election race for Ohio’s 12th District after the retirement of Pat Tiberi who served as the U.S. Representative from 2001-2018 in the reliably Republican district.(AP Photo/John Minchillo)

Primary election season continued with races in Kansas, Michigan, Missouri, and Washington, as well as a high-profile special election for a vacant Ohio House seat that remains undecided with votes still being counted. Among the takeaways: labor got a win in Missouri, while competition between Republicans and Democrats continued to narrow ahead of the November midterms.

Sanctions came into play in a big way, first with President Donald Trump reinstating sanctions against Iran, with a second phase to take effect in November — a policy made possible by the United States withdrawing from the Iran nuclear deal.

The U.S. also announced sanctions against Russia for their alleged use of a nerve agent on British soil against an ex-Russian spy and his daughter five months ago — an attack that belatedly impacted two British citizens last month, killing one.

Trade tensions continued between China and the U.S., with Trump’s proposed increase of tariffs on Chinese goods to 25 percent from the previous 10 percent, becoming reality, leading to China slapping 25 percent tariffs on $16 billion worth of U.S. goods.

In business news, Tesla’s board is conducting buyout talks with CEO Elon Musk after he tweeted about the possibility of taking Tesla private, and Pepsi CEO Indra Nooyi announced the impending end of her successful tenure at the food and beverage giant after 12 years.

Vice President Mike Pence laid out a broad outline for the creation of a Space Force — a new, sixth branch of the military first proposed earlier this year by the president — to establish American dominance in outer space, as soon as by 2020.

New York City became the first U.S. city to place a cap on the number of ride-sharing cars operated in the area by companies such as Uber and Lyft. The new law lasts for a year and also mandates a minimum wage be paid to drivers.

Tribune Media withdrew from a planned $3.9 billion merger deal with Sinclair Broadcast Group, then sued them for “breach of contract.” The proposed partnership hit roadblocks last month when the Federal Communications Commission expressed concerns about the legality of the deal.

As the first anniversary approaches of the deadly “Unite the Right” rally in Charlottesville, Virginia’s governor declared a state of emergency amidst stated plans by various white supremacist and right-wing groups to protest again, both there and in other cities around the country.

Top line: “Republicans had a brush with trouble in Ohio, where a result had still not been declared in a special election to fill a House vacancy. Elsewhere, an activist sweep on the left failed to materialize.” 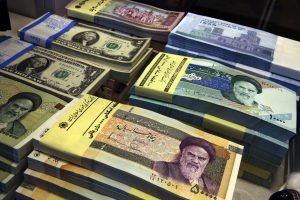 In this April 4, 2015 file photo, Iranian and U.S. banknotes are on display at a currency exchange shop in downtown Tehran, Iran. Iran’s currency is continuing its downward spiral as increased American sanctions loom, hitting a new low on the thriving black market exchange. The Iranian rial fell to 112,000 to the dollar on Sunday, July 29, 2018, from 98,000 to $1 on Saturday. (AP Photo/Vahid Salemi, File)

Top line: “President Donald Trump wrote on Twitter on Tuesday that he is seeking “world peace” by imposing “the most biting sanctions ever” against Iran, the latest example of escalating tensions between the two nations. The sanctions were softened by the Obama administration as part of a landmark 2015 nuclear agreement with Iran. Trump scrapped that deal in May, putting sanctions back into effect as of early Tuesday morning. Additional sanctions on Iran will go into effect in early November.”

3. The Reason Behind the U.S.’s Latest Sanctions on Russia – The Atlantic, Yasmeen Serhan

Top line: “Five months after a deadly nerve agent threatened the life of a former Russian spy and his daughter in Britain, Donald Trump’s administration announced Wednesday that it will be imposing new sanctions on Russia for its alleged involvement in the attack. The announcement was made after the United States formally concluded this week that Russia’s alleged use of the Novichok nerve agent in the attempted assassination of the former Russian spy Sergei Skripal and his daughter, Yulia, put Moscow in violation of international law. The sanctions, which State Department Spokeswoman Heather Nauert said are expected to go into effect later this month, will limit the export of sensitive national-security related goods to Russia. They are projected to impact hundreds of millions of dollars in trade, and have already sent the Russian ruble tumbling to a two-year low.”

Top line: “China said Wednesday it will retaliate against the latest round of U.S. tariffs on Chinese imports. The Chinese Ministry of Commerce announced a 25 percent charge on $16 billion worth of U.S. goods. The 333 goods being targeted by China include vehicles such as large passenger cars and motorcycles. Various fuels are on the list, as well as fiber optical cables. China is also going after coal, grease, Vaseline, asphalt and plastic products, and recyclables. China’s announcement comes after the U.S. Trade Representative’s office released a finalized list of $16 billion worth in Chinese goods that will be hit with tariffs. The U.S. charges will take effect on Aug. 23. The latest U.S. list brings the total worth of Chinese goods facing a 25 percent tariff to $50 billion.” 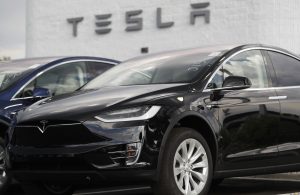 In this July 8, 2018, photo, a 2018 Model X sits on display outside a Tesla showroom in Littleton, Colo. Board members at Tesla are evaluating CEO and Chairman Elon Musk’s $72 billion proposal to take the electric car and solar panel maker private. Six of nine members say in a statement Wednesday, Aug. 8, that Musk began talking with the board about the move last week. (AP Photo/David Zalubowski)

5. Tesla board says there are buyout talks with Elon Musk – BBC News

Top line: “Tesla’s board has confirmed that it will consider the proposal by chief executive Elon Musk to take it private. A statement was issued by six members of the electric carmaker’s board after Mr Musk tweeted to say he had the funding to de-list the company. The board had “met several times over the last week” to discuss going private, the statement said. They said this “included discussion as to how being private could better serve Tesla’s long-term interests”. Mr Musk said in his tweet on Tuesday that shareholders would be offered $420 (£326) per share, valuing the business at more than $70bn. This would make it the biggest deal of its kind, surpassing the purchase of utility TXU Corp in 2007 for $44bn by a consortium.” 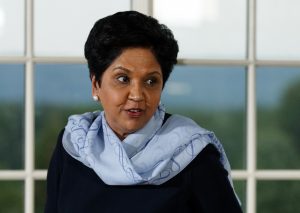 Top line: “Indra Nooyi is stepping down as chief executive officer of food and beverage giant PepsiCo Inc., handing the reins to a top lieutenant in a transition that will draw attention to the dearth of prominent female CEOs in corporate America. Nooyi, 62, will leave the role in October and remain chairman until early 2019. Ramon Laguarta, 54, who has been a candidate to take over since a promotion last year to president, will be just the sixth CEO in the 53-year history of the company. Nooyi, who is from India, is the first foreign-born CEO of PepsiCo and the first woman to lead the chips-and-soda behemoth, whose revenue topped $63 billion last year.”

7. Pence details plan for creation of Space Force in what would be the sixth branch of the military – The Washington Post, Christian Davenport, Dan Lamothe

Top line: “Vice President Pence laid out an ambitious plan Thursday that would begin creating a military command dedicated to space and establish a “Space Force” as the sixth branch of the U.S. military as soon as 2020, the first since the Air Force was formed shortly after World War II. Pence warned of the advancements that potential adversaries are making and issued what amounted to a call to arms to preserve the military’s dominance in space. But the monumental task of standing up a new military department, which would require approval by a Congress that shelved the idea last year, may require significant new spending and a reorganization of the largest bureaucracy in the world.”

Top line: “New York City Council passed regulations on ride-hail companies such as Uber and Lyft on Wednesday, capping the number of vehicles on the road for one year and requiring that drivers be paid a minimum wage. The year-long cap on new licenses for ride-hailing vehicles will take place while the Taxi and Limousine Commission (TLC) studies the effects of ride-hail services in the city. The cap will not apply to new wheelchair-accessible vehicles or new vehicles serving an area demonstrating need in a way that does not increase congestion.”

Top line: “Tribune Media Company is ending its troubled merger deal with Sinclair Broadcast Group, less than a month after federal regulators cited concerns about the plan. Tribune also filed a lawsuit accusing Sinclair with breach of contract. The media merger hit the rocks on July 16, when Federal Communications Commission Chairman Ajit Pai said he had “serious concerns” about the merger because Sinclair’s plan to divest some stations might not satisfy federal laws.”

10. What to know about the violent Charlottesville protests and anniversary rallies – ABC News, Meghan Keneally

Top line: “On Aug. 12, 2017, a “Unite the Right” rally in Charlottesville turned deadly when a 20-year-old Ohio man allegedly accelerated his car into a crowd of counter-protesters, killing 32-year-old Heather Heyer and leaving 19 others injured, five critically. Now, some of the same right-wing groups involved in those events in Charlottesville are planning another protest to coincide with the anniversary this weekend. Virginia Gov. Ralph Northam and the city of Charlottesville declared states of emergency ahead of this weekend’s anniversary. The governor said in a press conference Wednesday he will allow agencies to call in the National Guard to assist in security efforts. But larger protests are planned for Washington D.C. Here’s what you need to know.”