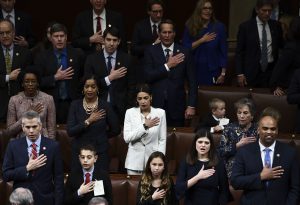 Members of Congress take the oath during the start of the 116th Congress and swearing-in ceremony on the floor of the US House of Representatives at the US Capitol on January 3, 2019 in Washington,DC. (Photo by Brendan Smialowski / AFP) (Photo credit should read BRENDAN SMIALOWSKI/AFP/Getty Images)

The 116th U.S. Congress was sworn in on January 3, with multiple historic firsts marked in the process: Rep. Nancy Pelosi was elected for a second time as speaker of the House and several new Muslim-, Latino-, Asian-, African- and Native American members joined the ranks of the Democratic Party.

On the Senate side, Senator Elizabeth Warren took the first step toward a possible 2020 presidential bid when she launched of an exploratory committee into pursuing the Democratic Party nomination.

The Democrat-led House of Representatives passed spending bills to end the government shutdown, but the legislation faces a reluctant Senate and a veto threat from President Donald Trump. The shutdown is entering its third week.

Two human-made crafts went where no man has gone before: a Chinese unmanned spacecraft became the first to successfully land on the “dark” side of the moon and began exploring the terrain. NASA’s New Horizons probe set a record for the farthest ever exploration in the solar system.

Former U.S. Marine and quadruple citizen of the U.S., U.K., Canada and Ireland Paul Whelan was formally charged with espionage by Russian authorities. North Korea’s Kim Jong Un warned of a possible nuclear “new path” if U.S. sanctions were not rolled back, Saudi Arabia began trials for 11 suspects in the murder of journalist Jamal Khashoggi, and Brazil swore in a new president, Jair Bolsonaro.

Top line: “The 116th Congress gaveled into session Thursday swathed in history, returning the first woman to the House speaker’s office and ushering in a diverse class of Democratic freshmen ready to confront President Donald Trump in a new era of divided government. The new Congress is like none other. There are more women than ever before, and a new generation of Muslims, Latinos, Native Americans and African-Americans in the House is creating what academics call a reflective democracy, more aligned with the population of the United States. The Republican side in the House is still made up mostly of white men, and in the Senate Republicans bolstered their ranks in the majority.” 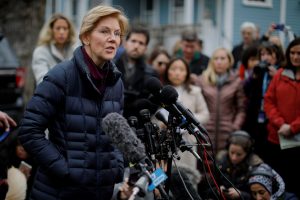 U.S. Senator Elizabeth Warren (D-MA) speaks to reporters, after announcing she has formed an exploratory committee to run for president in 2020, outside her home in Cambridge, Massachusetts, U.S., December 31, 2018. (REUTERS/Brian Snyder)

Top line: “Senator Elizabeth Warren, the Massachusetts Democrat and a sharp critic of big banks and unregulated capitalism, entered the 2020 race for president on Monday, becoming the first major candidate in what is likely to be a long and crowded primary marked by ideological and generational divisions in a Democratic Party determined to beat President Trump. Ms. Warren quickly made plans to campaign this weekend in Iowa, which holds the first-in-the-nation presidential caucuses in February 2020. The senator, who has not traveled to Iowa recently, announced Tuesday that she would visit several of the state’s major cities: Des Moines, Council Bluffs, Storm Lake and Sioux City.” 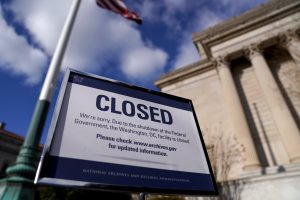 A sign declares the National Archive is closed due to a partial federal government shutdown in Washington, U.S., December 22, 2018. (REUTERS/Joshua Roberts/File Photo)

Top line: “The newly minted House Democratic majority pushed through a series of spending bills on Thursday to reopen the federal government, but congressional Republicans dismissed the effort as pointless political theater and the White House threatened a presidential veto as a partial government shutdown neared its third week. Just hours after Democratic leader Nancy Pelosi reclaimed the speaker’s gavel and Democrats returned to the power for the first time in eight years, the House sought to end the 13-day shutdown by voting 241-190 to fund eight of the nine shuttered departments. The legislation includes $1.3 billion for border security but none of the funding that President Donald Trump is demanding to build a wall along the U.S.-Mexico border. The temporary funding would enable the department to reopen and buy more time for Congress and the White House to resolve their standoff over border wall funding.” 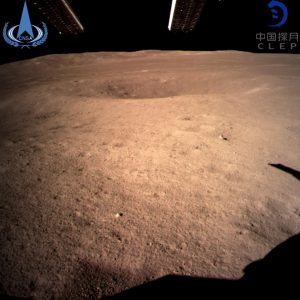 The far side of the moon taken by the Chang’e-4 lunar probe is seen in this image provided by China National Space Administration January 3, 2019. A Chinese space probe successfully touched down on the far side of the moon on January 3, China’s space agency said, hailing the event as a historic first and a major achievement for the country’s space program. The probe, which has a lander and a rover, touched down at a targeted area near the moon’s south pole in the Von Karman Crater after entering the moon’s orbit in mid-December. The tasks of the Chang’e-4 include astronomical observation, surveying the moon’s terrain, landform and mineral makeup, and measuring the neutron radiation and neutral atoms to study the environment of its far side.
(China National Space Administration/CNS via REUTERS)

4. China just landed on the far side of the moon: What comes next? – National Geographic, Michael Greshko

Top line: “On the evening of January 2, a Chinese lander named for an ancient moon goddess touched down on the lunar far side, where no human or robot has ever ventured before. China’s Chang’e-4 mission launched toward the moon on December 7 and entered orbit around our cosmic companion on December 12. Now, the spacecraft has alighted onto the lunar surface. Leading up to the historic touchdown, details on Chang’e-4’s landing were few and far between. CNSA is notoriously secretive; the last update offered was on December 30, when officials stated that the spacecraft had entered its final pre-landing orbit. Around the world, scientists and enthusiasts huddled in online forums and on Twitter before the landing, trading whispers as they read the latest from well-sourced journalists, Weibo accounts, and amateur astronomers tracking Chang’e-4’s orbit. Once confirmation came that Chang’e-4 touched down, though, uncertainty gave way to joy.”

Top line: “A lawyer for Paul Whelan, an American citizen charged in Russia with espionage, said Thursday he filed an appeal in court against Whelan’s detention because he believes the arrest was unfounded. Whelan, 48, a Michigan resident and corporate security director, was arrested December 28 in Moscow on suspicion of carrying out an act of espionage, Russia has said. His family rejects the accusation, asserting that he was in Russia only for vacation. The Russian government announced the arrest Monday; no further details about the specific allegations against him have been released.”

Top line: “The North Korean leader Kim Jong-un has said he hopes to continue denuclearisation talks with Donald Trump in 2019 but used his New Year’s address to warn that he could be forced to take a “new path” if the US persists with sanctions against his regime. Wearing a dark suit and seated on a leather armchair in front of portraits of his predecessors – his father, Kim Jong-il, and grandfather Kim Il-sung – Kim said he was willing to meet the US president “at any time” to produce an outcome that would be “welcomed by the international community”. But he added that North Korea would have “no option but to explore a new path in order to protect our sovereignty” if Washington “continues to break its promises and misjudges our patience by unilaterally demanding certain things and pushes ahead with sanctions and pressure”. He did not give details on what that “new path” might entail.”

Top line: “Saudi Arabia says it is seeking the death penalty for five of 11 suspects in the killing of Washington Post journalist Jamal Khashoggi last year, according to the country’s Public Prosecutor. The 11 suspects appeared in a Riyadh courtroom Thursday for the first hearing in the case. It is the latest development in a case that has triggered a reckoning about U.S. support of Saudi Arabia in the war in Yemen, as well as the financial influence of Saudi Arabia in Washington, D.C., Hollywood and Silicon Valley. Khashoggi was a Saudi journalist writing and living in self-imposed exile in the United States. He entered the Saudi Arabian consulate in Istanbul on Oct. 2, 2018, and never emerged.”

Top line: “The small, icy world known as Ultima Thule has finally been revealed. A new picture returned from Nasa’s New Horizons spacecraft shows it to be two objects joined together – to give a look like a “snowman”. The US probe’s images acquired as it approached Ultima hinted at the possibility of a double body, but the first detailed picture from Tuesday’s close flyby confirms it. New Horizons encountered Ultima 6.5 billion km from Earth. The event set a record for the most distant ever exploration of a Solar System object. The previous mark was also set by New Horizons when it flew past the dwarf planet Pluto in 2015. But Ultima is 1.5 billion km further out.”

Top line: “Apple lowered its Q1 guidance in a letter to investors from CEO Tim Cook Wednesday. Apple stock was halted in after-hours trading just prior to the announcement, and shares were down about 7 percent when trading resumed 20 minutes later. Apple lowered revenue guidance to $84 billion, down from the $89 billion to $93 billion it had previously projected. The company lowered gross margin to about 38 percent from between 38 percent and 38.5 percent. Apple blamed a variety of factors for the lowered guidance, including a weakening economy in China and lower-than-expected iPhone revenue. Apple said the lower-than-anticipated revenue happened “primarily in Greater China,” but also said that upgrades to new iPhone models in other countries were “not as strong as we thought they would be.””

Top line: “Jair Bolsonaro was sworn in as Brazil’s president on Tuesday after a controversial, polarizing campaign to radically change the center-left path taken by Latin America’s biggest country over the last 15 years. Bolsonaro, a provocative, far-right populist, has pledged to purge the country of corruption and crack down on crime — even if that means ignoring democratic norms. Brazil’s once-promising economy, which averaged 4% GDP growth between 2004 and 2013, has been crippled by recession and corruption scandals at the highest levels of government.”

~ HeatherC is reading New Year, New You by PureWow