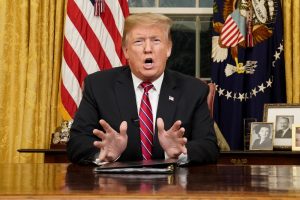 President Donald Trump speaks from the Oval Office of the White House as he gives a prime-time address about border security Tuesday, Jan. 8, 2018, in Washington. (Carlos Barria/Pool Photo via AP)

The partial government shutdown continued into its 21st day, tying the record for the longest shutdown in U.S. history. President Donald Trump and House Democrats took to the airwaves to make their cases. Negotiations remained stalled and bills to open certain government agencies failed to become law.

Some of the over 800,000 federal workers left without work or working without pay took to the streets across the country to protest.

The U.S. began the troop-withdrawal process in Syria with the removal of military cargo. Meanwhile, Secretary of State Mike Pompeo toured the Middle East and voiced commitment to fighting ISIS and Iranian influence in the region.

Amazon founder and CEO Jeff Bezos and his wife Mackenzie filed for divorce after 25 years of marriage.

In Las Vegas, the 2019 Consumer Electronics Show featured innovations from around the world, and this year’s Golden Globe Awards made history on several fronts.

Top line: “President Trump delivered a forceful and fact-challenged televised plea to the nation Tuesday night for his long-promised border wall, declaring “a growing humanitarian and security crisis” at the southern border and blaming congressional Democrats for the partial government shutdown that he helped instigate three weeks ago. Trump painted a harrowing picture of danger and death along the U.S.-Mexico border, describing undocumented immigrants as murderers, rapists and drug smugglers and arguing that a steel barrier — for which he is demanding that Congress appropriate $5.7 billion — is the only solution. Democratic leaders, who have steadfastly resisted Trump’s demand for wall funding in part because they consider such a barrier to be immoral and unnecessary, accused Trump of fearmongering in his Tuesday night address. They called on him to immediately end the government shutdown, which they said was disrupting the pay of 800,000 federal workers and depriving millions of American citizens of critical services.” 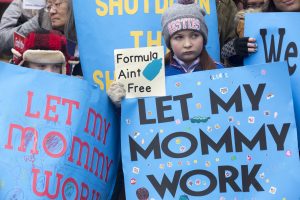 OGDEN, UT – JANUARY 10: Taylor Kirkpartick, 12, holds a sign protesting the government shutdown at the James V. Hansen Federal Building on January 10, 2019 in Ogden, Utah. As the shutdown nears the three week mark, many federal employees will not receive a paycheck tomorrow. (Photo by Natalie Behring/Getty Images)

Top line: “Hundreds of furloughed government workers and contractors descended on the White House on Thursday to plead to be allowed to return to work. Holding signs such as “Stop the war on workers” and “We want work, not walls,” the protesters assembled in the bitter cold outside of AFL-CIO union headquarters before making their way to 1600 Pennsylvania Avenue. President Donald Trump wasn’t at the White House, but many of the protesters blamed him for the shutdown, which has now stretched in to its 20th day with no end in sight. Congress and the president have been locked in a stalemate over his demand for $5.7 billion to build a border wall that he’d said Mexico would pay for. Over 800,000 workers have been affected by the partial government shutdown, which will become the longest in the country’s history by Saturday.”

Top line: “Amazon CEO Jeff Bezos and his wife, MacKenzie, are divorcing. The billionaire executive and his wife of 25 years announced the news Wednesday — three days before his 55th birthday — in a tweet signed by both of them. They have four children. The couple last year launched a charitable fund together, dubbed the Day One Fund. The statement Wednesday suggests they will continue to work together on that effort.”

Top line: “Secretary of State Mike Pompeo laid out his vision for America’s role in the Middle East on Thursday, telling a university audience in Cairo that “the age of self-inflicted American shame is over” and that the United States would pursue a more activist policy, despite President Trump’s decision to pull troops out of Syria. Mr. Pompeo’s prescription was short on specifics, beyond bolstering alliances with Arab autocrats loyal to Washington. Instead he painted a picture of a Middle East cast into chaos by President Barack Obama, and that can only be rescued by crushing Iran. He advocated a policy of containment of Iran’s power, pressing for allies in the region to isolate the country. He vowed to “expel every last Iranian boot” from Syria, but offered no plan to achieve that goal at a moment when the American force of 2,000 troops is scheduled to withdraw.”

Top line: “President Donald Trump’s former lawyer Michael Cohen will testify before the House Oversight Committee, the first major move by House Democrats to haul in a member of Trump’s team connected to special counsel Robert Mueller’s investigation, according to a schedule published by the committee. Cohen has agreed to testify publicly before the panel on February 7, according to a statement from Cohen. Cohen is coming to Capitol Hill after he pleaded guilty and was sentenced in December to three years in prison on multiple charges, including two campaign finance crimes tied to illicit payments made to silence women during the presidential campaign — crimes that prosecutors say Trump directed Cohen to commit.” 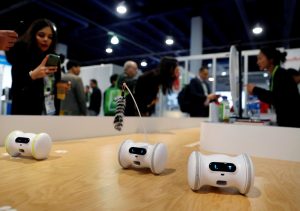 Pet fitness robots, which move automatically or are controlled with a smartphone, are displayed at the Varlam booth during the 2019 CES in Las Vegas, Nevada, U.S. January 9, 2019. (REUTERS/Steve Marcus)

Top line: “It’s January in Las Vegas and tech innovators from around the globe have gathered to showcase their wares at the Consumer Electronics Show. From walking cars to roll-up TVs, here’s New Atlas’ pick of the best new product ideas on display.” 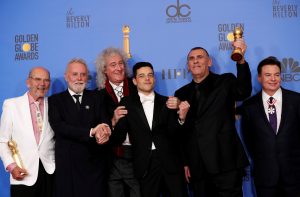 Top line: “Sandra Oh and Andy Samberg’s lighthearted opening monologue would’ve made our list anyway because it was truly a delight. But then the Killing Eve star took it to the next level while explaining why she agreed to cohost the Globes and acknowledge “this moment of change.” “I’m not fooling myself,” she said. “Next year could be different. It probably will be. But this moment, it is real. Trust me, it is real because I see you…all of these faces of change, and now so will everyone else.””

Top line: “Brown was sentenced to life in prison in 2006 after she fatally shot a man in the back of the head while he was lying in bed beside her. But in a remarkable announcement Monday, Gov. Bill Haslam said her rehabilitation behind bars, combined with her youth at the time of the crime, warranted mercy. Haslam granted Brown a full commutation to parole on Monday. She will stay on parole for 10 years. Brown will be required to participate in regular counseling sessions and to perform at least 50 hours of community service, including working with at-risk youth. She also will be required to get a job.”

Top line: “Sears Holdings Corp (SHLDQ.PK) Chairman Eddie Lampert confirmed on Thursday he has made a new takeover bid of more than $5 billion for the company, an offer that may significantly increase the likelihood the U.S. department store will be able to stay in business. Lampert’s revised offer, whose details were first reported by Reuters on Wednesday, will be assessed by Sears during a Jan. 14 bankruptcy auction. The company will consider whether the bid offers more value to creditors than a liquidation.”

Top line: “A Saudi woman who fled alleged abuse by her family left Bangkok on Friday night to fly to Canada to take up an offer of asylum, Thailand’s immigration police chief said. Rahaf Mohammed Alqunun, 18, took a flight to Seoul, South Korea, with a final destination of Toronto, said Police Chief Surachate Hakparn. Several countries, including Canada and Australia, had been in talks with the U.N.’s refugee agency to accept Alqunun, he said earlier in the day. Canada’s ambassador had seen her off at the airport, Surachate said, adding that she looked happy and healthy.”