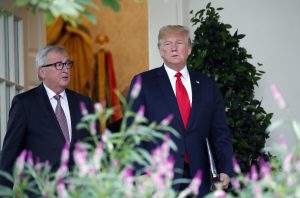 President Donald Trump and European Commission President Jean-Claude Juncker announced that tariffs will be put on hold and negotiations would begin immediately between the United States and European Union. The agreement to work towards “zero tariffs” marked a turning point in what has been rapidly escalating tensions between the two major world economies.

News of the negotiations come too late for many U.S. farmers, who are losing income, business and jobs as a result of retaliatory tariffs imposed by other countries against American agricultural products. As a result, President Trump proposed $12 billion in aid for affected farmers, who responded by demanding “trade, not aid.”

Ivanka Trump decided to shutter her namesake fashion company, describing the decision as spurred by her desire to focus on a career in public policy. However, the company had also been the subject of ethical concerns due to the fact that she remained a financial beneficiary while representing her father’s administration.

A court deadline to reunite the thousands of separated immigrant children with their parents and families came and went with mixed results: 1,442 children reported reunited, but 711 still detained, and 431 parents already deported by the U.S. government without their children.

In business news, Facebook’s stock value dropped by over $100 billion in the biggest one-day loss ever. The change follows months of controversies ranging from data and privacy breaches to the company’s struggle to monitor and bar hate speech on the social media platform.

Automaker Fiat Chrysler also mourned the loss of their game-changing leader, former CEO Sergio Marchionne, who died at the age of 66 just days after leaving the company.

Arson is suspected of having sparked a devastating wildfire that engulfed portions of Greece and killed nearly 90 people.

Congress also made political headlines with the confirmation of Robert Wilkie as secretary of the Department of Veterans Affairs, and Speaker of the House Paul Ryan rejecting an effort by 11 House Republicans to file articles of impeachment against Deputy Attorney General Rod Rosenstein, allegedly for not giving them access to documents related to the special counsel investigation into Russian interference in the 2016 presidential election.

In science news, water was found on Mars in the form of a stable, salty, underground lake.

Top line: “President Donald Trump on Wednesday said the United States and the European Union had launched a “new phase” in their relationship, saying that the two major economies would start negotiations immediately on a number of areas that include working toward “zero tariffs” on industrial goods, and further cooperation on energy issues. Juncker said the two leaders also agreed that as long as negotiations were ongoing, “we’ll hold off further tariffs and reassess existing tariffs on steel and aluminum” put in place by the Trump administration. “This was a good, constructive meeting,” he added.”

Top line: “The Trump administration announced on Tuesday that it would provide up to $12 billion in emergency relief for farmers hurt by the president’s trade war, moving to blunt the financial damage to American agriculture and the political fallout for Republicans as the consequences of President Trump’s protectionist policies roll through the economy. Unveiled two days before the president is scheduled to visit Iowa, a politically important state that is the nation’s top soybean producer, the farm aid appeared calculated to show that Mr. Trump cares about farmers and is working to protect them from the worst consequences of his trade war. But the relief money, announced by the Department of Agriculture, was also an indication that Mr. Trump — ignoring the concerns of farmers, their representatives in Congress and even some of his own aides — plans to extend his tit-for-tat tariff wars.”

Top line: “Ivanka Trump has decided to shut down her company after deciding to pursue a career in public policy instead of returning to her fashion company. Trump’s clothing and accessory business has been operating with limitations to reduce potential violations of ethics laws and the perceptions she’s profiteering off her White House role. Given those restrictions, Ivanka, who serves as a senior adviser to President Donald Trump, decided it didn’t make sense to keep the company running if she’s not returning after her father’s presidency, two people with knowledge of her decision-making process told CNN.”

Top line: “At the expiration of a court deadline to reunite migrant families separated during its “zero tolerance” border crackdown, the Trump administration said Thursday that it has delivered 1,442 children to parents detained in immigration custody, and is on track to return all of those deemed eligible for reunification. But 711 children remain in government shelters because their parents have criminal records, their cases remain under review or the parents are no longer in the United States, officials said. They added that 431 parents of those children have been deported.” 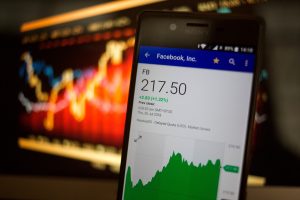 A smartphone displays the Facebook, Inc. market value on the stock exchange via the Yahoo Finance app. (Photo by Guillaume Payen/SOPA Images/LightRocket via Getty Images)

Top line: “Facebook shares dove 19 percent Thursday, shedding about $100 billion in market value, for the biggest one-day wipeout of stock market value for any U.S. company. The decline, fueled by the social network’s slowing growth, marked Facebook’s largest market drop ever, eclipsing a 12 percent drop on July 27, 2012. Another 7 percent drop on March 19, the Monday after news of the Cambridge Analytica crisis broke, caused a $36.4 billion decline in Facebook’s market value. Facebook’s one-day swoon surpassed Intel’s $91 billion loss in September 2000, the previous largest loss of value in one day, according to Bloomberg. The drop was based on all shares outstanding, Bloomberg said. Other tech stocks sold off Thursday, too. Facebook competitor Twitter was down 3 percent.”

Top line: “Sergio Marchionne, the former chief executive officer of Fiat Chrysler and architect of the automaker’s dramatic turnaround, has died. He was 66. Marchionne died on Wednesday at a Zurich hospital, just days after he had been replaced as CEO, according to Exor NV, the holding company of Fiat’s founding Agnelli family. His health had declined suddenly following complications from shoulder surgery, according to people familiar with the situation.” 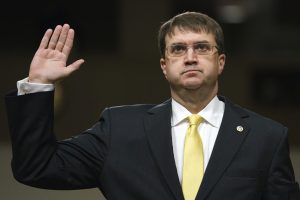 In a Wednesday, June 27, 2018 file photo, Veterans Affairs Secretary nominee Robert Wilkie is sworn in at the start of a Senate Veterans Affairs Committee nominations hearing on Capitol Hill in Washington. Wilkie is expected to become secretary of Veterans Affairs when the Senate votes Monday, July 23 to confirm him. (AP Photo/Carolyn Kaster, File)

Top line: “President Trump’s second VA secretary, Robert Wilkie, was confirmed 86-9 by the Senate on Monday. He takes the helm of the second largest department in the U.S. government, with more than 350,000 employees, a nearly $200 billion budget and almost 20 million American veterans depending on it for care and benefits. That may sound like a herculean task. Now add that the department has been in turmoil since Trump sacked his first VA secretary, David Shulkin, with dozens of senior staff, subject matter experts and career officials quitting or being pushed out. Wilkie was seen as a safe pick, and VA secretaries have traditionally gotten unanimous approval in the Senate as a sign of bipartisan cooperation on veterans issues. For the first time though, eight Democrats and one Independent — Bernie Sanders — voted no. Sanders said he wasn’t opposed to Wilkie in particular, but is against what he says are Trump administration moves to turn VA healthcare over to the private sector.”

Top line: “House Speaker Paul Ryan spoke out against an effort by a small group of conservatives to impeach Deputy Attorney General Rod Rosenstein on Thursday, dooming the endeavor for now and easing a months-long standoff between House Republicans and the Justice Department. Ryan said the tussle over document requests between House Republicans and Rosenstein, who oversees the federal Trump-Russia investigation, doesn’t rise to the level of “high crimes and misdemeanors” that could warrant impeachment under the Constitution.  Ryan made the comments a day after the group of 11 House Republicans sharply escalated the extended clash with the Justice Department by filing articles of impeachment against Rosenstein, who oversees special counsel Robert Mueller’s investigation.”

Top line: “Liquid water is refreshingly abundant on moons in the outer solar system, but it has proven surprisingly tough to find in reliable quantities on Mars—until now. Radar scans of the red planet suggest that a stable reservoir of salty, liquid water measuring some 12 miles across lies nearly a mile beneath the planet’s south pole. What’s more, the underground lake is not likely to be alone. If confirmed, the buried pocket of water could answer a few questions about where Mars’s ancient oceans went, as well as provide a resource for future human settlements. Even more thrilling for astrobiologists, such a feature may be an ideal habitat for extraterrestrial life-forms.”