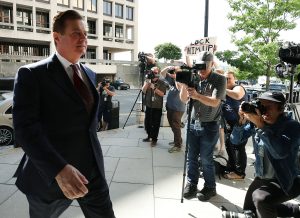 WASHINGTON, DC – JUNE 15: Former Trump campaign manager Paul Manafort arrives at the E. Barrett Prettyman U.S. Courthouse for a hearing on June 15, 2018 in Washington, DC. Today a federal judge could rule on whether to revoke Manafort’s bail due to alleged witness tampering. Manafort was indicted last year by a federal grand jury and has pleaded not guilty to all charges against him including, conspiracy against the United States, conspiracy to launder money, and being an unregistered agent of a foreign principal. (Photo by Mark Wilson/Getty Images)

The first trial to result from special counsel Robert Mueller’s Russia investigation began Tuesday with former Trump campaign chairman Paul Manafort in the hot seat. He faces several charges ranging from money laundering and tax fraud, and has been accused of working as a foreign agent while working for the campaign.

Ongoing efforts to monitor and prevent Russian interference in U.S. elections also led to Facebook announcing that they had identified, deleted and banned 32 pages and fake accounts from their social media platform, reportedly for pushing politically divisive rhetoric through an “influence campaign.”

CBS CEO Les Moonves has been accused of sexual misconduct against employees over the years. The CBS board of directors declined to take any action during their review, but has hired two law firms to conduct an independent investigation.

The Trump administration announced plans to end fuel efficiency standards for new automobiles, reversing an Obama-era effort at reducing greenhouse gas emissions, and setting up a legal battle with states such as California that have fuel standards of their own.

The administration also proposed increasing tariffs on Chinese goods to 25 percent instead of the previously instituted 10 percent, escalating economic tensions between the two world powers.

The detention of American pastor Andrew Brunson on allegations of espionage has sparked an international conflict between the United States and Turkey, where Brunson has lived and worked for over two decades. The U.S. issued sanctions against the Mediterranean nation and called for Brunson’s release. In response, Turkey accused the U.S. of being undiplomatic and disrespectful.

3D-printing has quickly become a popular and cost-efficient way to produce everything from toys to artificial hearts, but plans to distribute a blueprint for 3D-printed guns have sparked public debate and a legal battle over the impact to public safety if untraceable weapons could be mass-produced.Pope Francis declared the death penalty to be “inadmissible” in all cases, changing Catholic Church teaching with his announcement.

Top line: “The prosecution shifted yesterday from describing Manafort’s lavish lifestyle to the core of their case: alleged tax and banking crimes committed when he desperately needed money.”

Top line: “Facebook said on Tuesday that it had identified a political influence campaign that was potentially built to disrupt the midterm elections, with the company detecting and removing 32 pages and fake accounts that had engaged in activity around divisive social issues.

The company did not definitively link the campaign to Russia. But Facebook officials said some of the tools and techniques used by the accounts were similar to those used by the Internet Research Agency, the Kremlin-linked group that was at the center of an indictment this year alleging interference in the 2016 presidential election.” 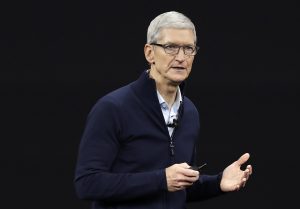 Top line: “Apple hit a market cap of $1 trillion on Thursday — and hung onto the record valuation at market close — as the iPhone maker became the first publicly traded U.S. company to reach $1 trillion. Amazon had also been approaching the threshold, surpassing $900 billion in market value in July. Apple had quite the head start, though, hitting $900 billion in November. Many on Wall Street noted earlier this week that Apple was firmly on the path to $1 trillion.” 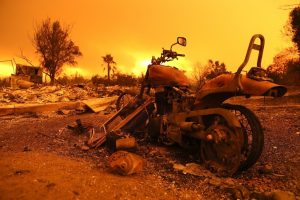 A motorcycle sits next to a home that was destroyed by the Carr Fire in Redding. (Justin Sullivan/Getty Images)

Top line: “Firefighters struggling to contain destructive Northern California wildfires found themselves facing a new blaze that erupted Tuesday and drove through a rural area near a national forest. About 60 homes in an old ranching and farming area near Covelo, which is about 180 miles (290 kilometers) north of San Francisco, were ordered evacuated as the blaze erupted late in the afternoon. Gusty winds quickly drove it through about a square mile of brush and grasslands, oak, pine and timber near Mendocino National Forest, Mendocino County Undersheriff Matthew Kendall said.” 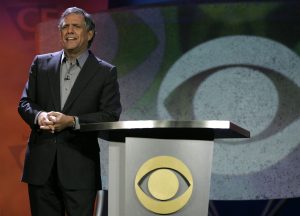 Top line: “CBS Corp (CBS.N) said on Wednesday it retained two law firms for a full investigation into the allegations about Chairman and Chief Executive Leslie Moonves, CBS News and cultural issues in the company. The board has also set up a special committee to help the probe, and Moonves will have no role in the investigation, CBS said in a statement. Moonves, who joined CBS in 1995 and has been CEO since 2006, earlier said he “may have made some women uncomfortable by making advances”, which he called mistakes that he regretted immensely, but that he understood “‘no’ means ‘no'” and had never used his position to harm anyone’s career.”

Top line: “The Trump administration announced plans Thursday to freeze fuel-efficiency requirements for the nation’s cars and trucks through 2026 — a massive regulatory rollback likely to spur a legal battle with California and other states, as well as create potential upheaval in the nation’s automotive market. The proposal represents an abrupt reversal of the approach during the Obama administration, when regulators argued that requiring more-fuel-efficient vehicles would improve public health, combat climate change and save consumers money without compromising safety. President Trump’s plan also would attempt to revoke California’s long-standing legal ability to set its own, more stringent tailpipe standards and restrict the ability of other states to follow its lead.”

Top line: “President Donald Trump’s administration threatened Wednesday to more than double tariffs on $200 billion of Chinese goods, escalating a trade war hours after a Chinese official warned Beijing would not respond to U.S. “blackmail.” Even as many Republicans on Capitol Hill have grown increasingly wary of Trump’s trade policies, Trump asked U.S. Trade Representative Robert Lighthizer to increase tariffs on the Chinese goods to 25 percent, up from the 10 percent announced earlier this year, according to a statement from the USTR office.”

Top line: “Turkey demanded Thursday that the U.S. immediately reverse a decision to impose sanctions over the treatment of detained American pastor Andrew Brunson. Former Turkish Prime Minister Ahmet Davutoğlu said the Trump administration’s decision was “incompatible with the most simple diplomatic courtesy and mutual respect” and risked regional instability. Relations between the countries have plummeted after Brunson, 50, was arrested in 2016 on charges of “committing crimes on behalf of terror groups without being a member” and espionage. He was recently released from prison and put under house arrest but still faces a sentence of up to 35 years if he is convicted at his ongoing trial.”

Top line: “With 3D printers, getting a gun could be as easy as downloading it. A person could find a schematic for a firearm online, plug it into a 3D printer with the right materials, and boom — a gun is created on the spot. No background check required, no serial number to trace the gun if it’s used in a crime. Some policymakers, however, are trying to prevent 3D-printed guns from going mainstream. On Tuesday, they landed a big victory: US District Judge Robert Lasnik in Seattle issued a restraining order that effectively halted a company’s plans to release 3D-printed gun designs online, arguing, “There is a possibility of irreparable harm because of the way these guns can be made.”

Top line: “Pope Francis has changed the teachings of the Catholic faith to officially oppose the death penalty in all circumstances, the Vatican has said. The Catechism of the Church, a codified doctrine which sums up teachings, had previously stated that the death penalty could be used in some cases. It now says it is “inadmissible because it is an attack on the inviolability and dignity of the person”. Pope Francis has spoken out against executions in the past. Last October, he had said the Church’s policy on the death penalty was one area where teaching was not static and could change with modern concerns.”

~HeatherC is reading about 500ish Words by M.G. Siegler