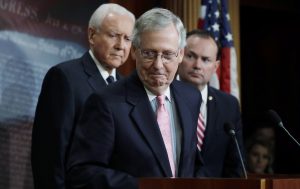 The U.S. Senate voted 51-49 to end debate and move Judge Brett Kavanaugh’s nomination to a full vote, which could be held as early as Saturday. This development came 24 hours after the FBI completed its supplemental background check of the Supreme Court nominee ahead of the White House’s Friday deadline, submitting an over 1,000-page report to the Senate early Thursday morning. Senate Republicans and Democrats disagreed over the takeaways, one side touting a lack of corroborating evidence to support allegations of sexual misconduct against Kavanaugh, while others decried the report as incomplete.

On the world stage, the U.S. finally came to an agreement with Canada, as well as Mexico, on terms for a trade deal to replace NAFTA, while also announcing the official end of a 63-year-old friendship treaty with Iran.

Seven Russian spies were indicted by the U.S. Department of Justice on charges of hacking computers associated with athletes and anti-doping sports organizations in the U.S. and around the world as retaliation for revealing Russia’s illegal doping program for Olympic competitors.

Several Americans were among the 2018 Nobel Prize winners recognized for their contributions to medicine, physics, chemistry, and peace. The literature category was not awarded this year due to a sexual assault scandal. The economics prize will be awarded next week.

Indonesians were hit with a trio of natural disasters this week when an earthquake triggered a tsunami that destroyed entire communities and started a death toll that passed 1,500 and continues to rise. This was followed by a volcano erupting on the same island at the center of the devastation.

The New York Times published a 13,000 word investigative report outlining how President Donald Trump is not a self-made billionaire, but rather received at least $413 million in cash, real estate, investments and bailouts from his father’s real estate empire over decades, via potentially criminal tax schemes and fraud, which New York regulators now say they are investigating. Here are 11 takeaways.First Lady Melania Trump embarked on her first major solo tour abroad, to Africa on a mission of highlighting projects focused on child health and well-being.

Top line: “The Senate advanced Brett M. Kavanaugh’s Supreme Court nomination in a key procedural vote Friday morning, putting him one step closer to confirmation and ending a deeply partisan and rancorous fight. The chamber voted 51 to 49 to advance the nomination after Republican leaders secured the votes of two GOP senators and one Democrat who had not publicly announced their intentions before arriving to vote. A final confirmation vote could come Saturday.” 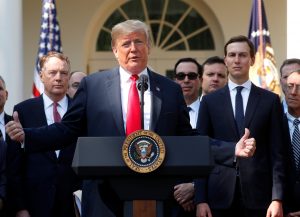 Top line: “The United States, Canada and Mexico came to a last minute agreement on a revised trade deal that could replace NAFTA. It’s called the USMCA. President Donald Trump and his Mexican and Canadian counterparts are expected to sign the deal by the end of November. It will then be up to Congress to approve the deal, which is likely to come up for a vote next year. Negotiations between Canada and the United States pushed right up to a deadline imposed by the Trump administration Sunday night, and details of the agreement were starting to emerge. Here are the biggest changes between the nearly 25-year-old NAFTA agreement and the new provisional USMCA.” 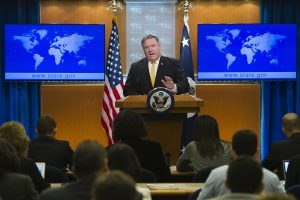 Secretary of State Mike Pompeo briefs reporters at the State Department in Washington, Wednesday, Oct. 3, 2018. Pompeo has announced that the U.S. is canceling a 1955 treaty with Iran establishing economic relations and consular rights between the two nations. (AP Photo/Cliff Owen)

3. The US is tearing up a friendship treaty with Iran you probably didn’t know existed – Vox, Jennifer Williams, Jen Kirby

Top line: “The two countries have been at each other’s throats — and at times on the brink of war — basically ever since Iranian student revolutionaries held 52 Americans hostage for 444 days during the 1979 Iranian Revolution. So you might be surprised to learn that the US has had a friendship treaty with Iran since 1955. But now the Trump administration has announced that it is officially ending that treaty. Speaking to reporters Wednesday, Secretary of State Mike Pompeo said the US would be terminating the treaty, formally known as the 1955 US-Iranian Treaty of Amity, Economic Relations, and Consular Rights. “This is a decision that is, frankly, 39 years overdue,” Pompeo said. If you’re confused about what’s going on here, don’t worry — you’re not alone. But we’ve got you covered. Here’s what you need to know about the treaty and why the Trump administration is ending it.”

Top line: “Seven Russian GRU intelligence officers were charged with hacking computers associated with 250 athletes and anti-doping sports organizations in the USA and around the world, Justice Department officials announced Thursday. According to the 41-page indictment, the criminal activity was retaliation against people and organizations who revealed Russia’s doping program for its athletes – revelations that led to the stripping of dozens of Olympic medals from Russian athletes and a ban on that country’s athletes from the 2016 Summer Olympics. The hacking that began in December 2014 and continued until at least May 2018 intruded into computers and networks of U.S. citizens and corporations and international corporations and their workers, the officials said.”

Top line: “The Nobel Prize in physiology or medicine has been awarded to James Allison and Tasuku Honjo “for their discovery of cancer therapy by inhibition of negative immune regulation.” The 2018 Nobel Prize in physics goes to Arthur Ashkin, Gérard Mourou, and Donna Strickland “for groundbreaking inventions in the field of laser physics.” The Nobel Prize in chemistry has been awarded to Frances Arnold “for the directed evolution of enzymes” and Greg Winter and George P. Smith “for the phage display of peptides and antibodies.”” 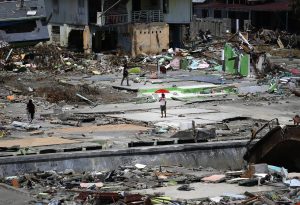 A man stands under an umbrella at a neighborhood ravaged by the tsunami in Wani village on the outskirts of Palu, Central Sulawesi, Indonesia, Thursday, Oct. 4, 2018. People living in tents and shelters have little but uncertainty since the powerful earthquake and tsunami hit the city, where death toll rises and efforts to retrieve scores more victims buried deep in mud and rubble were still hampered Thursday by the lack of heavy equipment. (AP Photo/Dita Alangkara)

Top line: “A disaster victim identification team at the hospital had been labouring tirelessly for six days to try to identify more than 700 bodies, taking fingerprints, conducting dental examinations and noting distinctive markings, scars or tattoos. On Thursday that process ended. A whiteboard erected outside the entrance conveyed an announcement that from now on all bodies found would be sent directly to graveyards. The team of 72 forensic specialists and medics from all over Indonesia identified 218 victims by matching post- and antemortem data. The unidentified were buried in a mass grave in Paboya, in the hills above Palu. Dr Lisa Cancer, the head of the identification team, said the bodies had to be disposed of within a matter of days for health reasons. As of Thursday morning the official death toll from the disaster stood at 1,424. On the ground, people believe it is far higher.”

Top line: “Donald J. Trump built a business empire and won the presidency proclaiming himself a self-made billionaire, and he has long insisted that his father, the legendary New York City builder Fred C. Trump, provided almost no financial help. “I built what I built myself,” the president has repeatedly said. But an investigation by The New York Times has revealed that Donald Trump received the equivalent today of at least $413 million from his father’s real estate empire. What’s more, much of this money came to Mr. Trump through dubious tax schemes he participated in during the 1990s, including instances of outright fraud, The Times found.”

Top line: “With a wave and tweet, first lady Melania Trump headed for Africa on Monday on her first big solo international trip, aiming to make child well-being the focus of a five-day, four-country tour that will take her to every corner of the vast and impoverished continent. The first lady opens her first-ever visit to Africa on Tuesday in Ghana in the West, followed by stops in Malawi in the South, Kenya in the East and Egypt in the Northeast. Mrs. Trump’s first extended turn on the world stage outside the shadow of President Donald Trump could still be complicated by her husband, who has spoken of the continent in impolite and even vulgar terms. That leaves the first lady with some fence-mending duties.”

Top line: “General Electric Co. ousted CEO John Flannery just over a year into his tenure and replaced him with a renowned turnaround expert — a surprise move that stoked the biggest rally in nine years for the company’s depressed shares. Larry Culp, who won Wall Street’s praise for transforming manufacturer Danaher Corp., takes over immediately amid one of the deepest slumps in GE’s 126-year-old history. The Boston-based company signaled more pain ahead, warning it would miss its 2018 earnings forecast and write down about $23 billion of goodwill associated with its struggling power segment.”

Top line: “Amazon will pay all of its U.S. employees a minimum of $15 an hour, more than double the federal minimum wage of $7.25. The retail giant, run by the world’s richest man, was criticized earlier this year after revealing its workers’ median pay was $28,446. Amazon says the new rate will go into effect on Nov. 1, covering all of its full-time, part-time, temporary and seasonal employees in the U.S.”

~HeatherC is reading about Money Moves With Girlboss by Girlboss